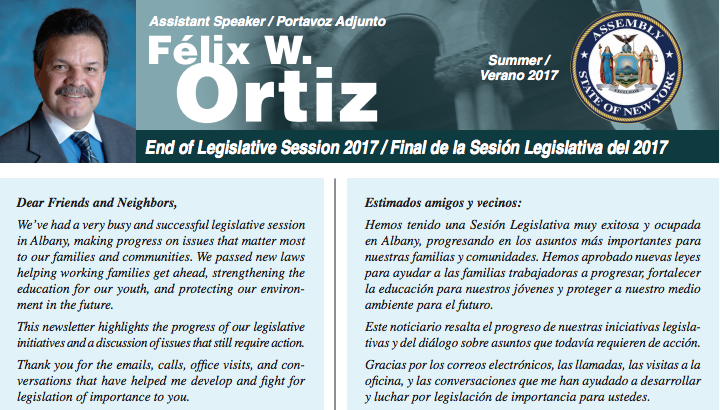 Members of the New York State Legislature have a key resource at their disposal to communicate with their constituents: mass mailers. Both the Senate and Assembly allow lawmakers to send public communications through different media -- chiefly employed in the form of direct printed newsletters and mailers -- to inform residents of their districts about recent legislation or special events, or to alert them of emergencies, and more. While these mailers are subject to certain restrictions in the run up to an election, differences between state rules and city regulations mean that state legislators running for City Council have a distinct advantage over their opponents at the local level.

In at least three City Council races where sitting state Assemblymembers are candidates, separate complaints have been filed with the city Campaign Finance Board alleging that each of them has violated prohibitions against using government-funded mass mailers within a mandated 90-day communication blackout period before the September 12 primary. Copies of the complaints were provided to Gotham Gazette.

The rules governing mass mailers are adopted by each legislative chamber, but they differ from the rules and guidelines established by the New York City Campaign Finance Board, which oversees expenditure by campaigns in the city. Each set of rules establishes ‘blackout’ periods ahead of an election, during which communications funded through government resources are prohibited unless they meet certain exceptions.

The New York City Charter states that “public servants” may not use government funds or resources for mass mailers within 90 days of a primary or general election. (The law also prohibits officials from appearing in government-funded advertisements in an election year.)

There are certain exceptions, for instance allowing one mailer to be sent out within 21 days of the passage of the city’s budget, and permitting communications required by law or those necessary for public safety or health emergencies, among others.

But since the City Charter only applies to “all officials, officers and employees of the city,” state officials and legislators are out of reach of those provisions and prohibitions. The state Assembly’s blackout period, in comparison, is only 30 days before a local, special or primary election and 60 days before the general. This effectively allows state legislators to use their offices to promote their image and build greater name recognition, enhancing the already-significant power of incumbency and giving them an additional leg up over their opponents who would have to rely on campaign funds to communicate with voters.

“It’s a clear loophole,” said John Kaehny, executive director of Reinvent Albany, a government reform organization. “The problem is that city law is always subordinate to state law. So the CFB cannot tell a state legislator what they can or cannot do.”

In District 38, incumbent Democratic City Council Member Carlos Menchaca is facing a slew of challengers, including sitting Assemblymember Felix Ortiz. A complaint filed with the CFB earlier this month alleged that Ortiz had violated the CFB’s blackout provisions by sending out four mailers from his government office over the summer. But these mailers, a regular function of state legislative offices, are exempt from the CFB’s purview.

“Part of Felix’s job as an Assemblyman is to inform his constituents, whether he’s running for office or not,” said Robinson Iglesias, Ortiz’s campaign treasurer. “He has been in full compliance with the CFB and he will continue to do so.”

Assemblymember Mark Gjonaj, the frontrunner for the District 13 seat being vacated by Council Member James Vacca, similarly sent out a legislative update to his constituents at the end of June.

Of Gjonaj’s four opponents in the Democratic primary, John Doyle has been his most vociferous critic and lodged objections with the CFB over potential violations regarding mass mailers and government-sponsored communications. When informed that the communications were largely permitted under the Assembly’s rules, Doyle directed his ire at both the state Legislature and Gjonaj. “We have a culture of corruption in Albany that allows this,” Doyle said in a phone interview. “This is the state Legislature that can’t seem to pass comprehensive campaign finance reform.” 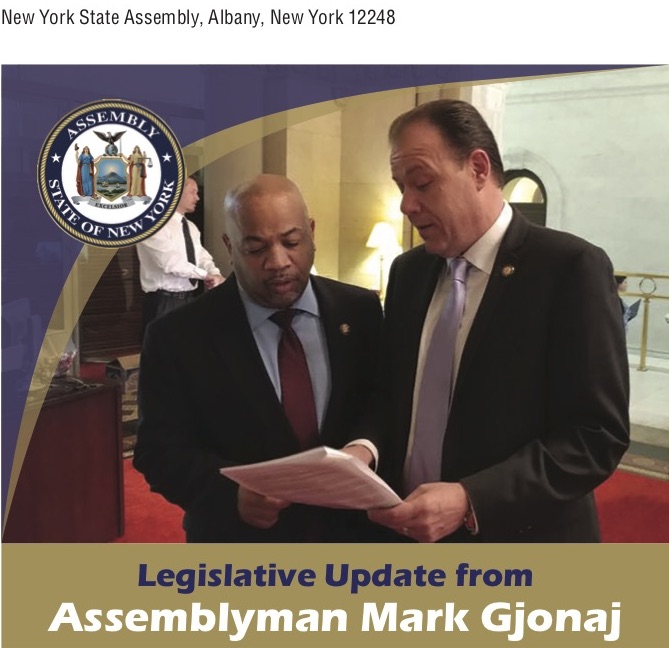 Doyle also insisted that Gjonaj has ample campaign resources at his disposal to get his message out and should have eschewed the Legislature’s mass mailing resources. “He’s against public funds to augment the voice of ordinary citizens,” Doyle said, referring to Gjonaj’s decision to not participate in the CFB’s public matching funds program, “but he has no problem using public funds when it supports his interests.”

Gjonaj’s campaign spokesperson Jennifer Blatus pushed back against Doyle’s complaint. “Let's be clear, there was no unfair advantage in the District 13 council race,” Blatus said in an email. “This is another ridiculous attempt by John Doyle to distract voters and continue his negative and divisive campaign.” Insisting that the CFB allows elected officials to conduct ordinary communications with constituents, she added, “In the final days of this election, while Mr. Doyle continues to complain over the experience Mark Gjonaj brings to this race, our campaign remains focused on the issues at hand, which is quality of life, public safety, education and transportation.”

In District 21, where Council Member Julissa Ferreras-Copeland is stepping down at the end of her current term, two Democrats are facing off in the primary: Assemblymember Francisco Moya and Hiram Monserrate, a disgraced former state Senator and Council member who is attempting a comeback after a checkered recent past that includes separate criminal convictions on fraud and assault charges.

Monserrate claims that Moya misused government resources to send mass email blasts within the 90-day period, including references to events Moya attended outside his district. Moya’s Assembly district overlaps with parts of Council District 21 but excludes large sections. “Moya is a liar and a fraud,” Monserrate said in a statement. “He lies about where he lives. And now we know he's committing fraud by using tax-dollars illegally to campaign.” 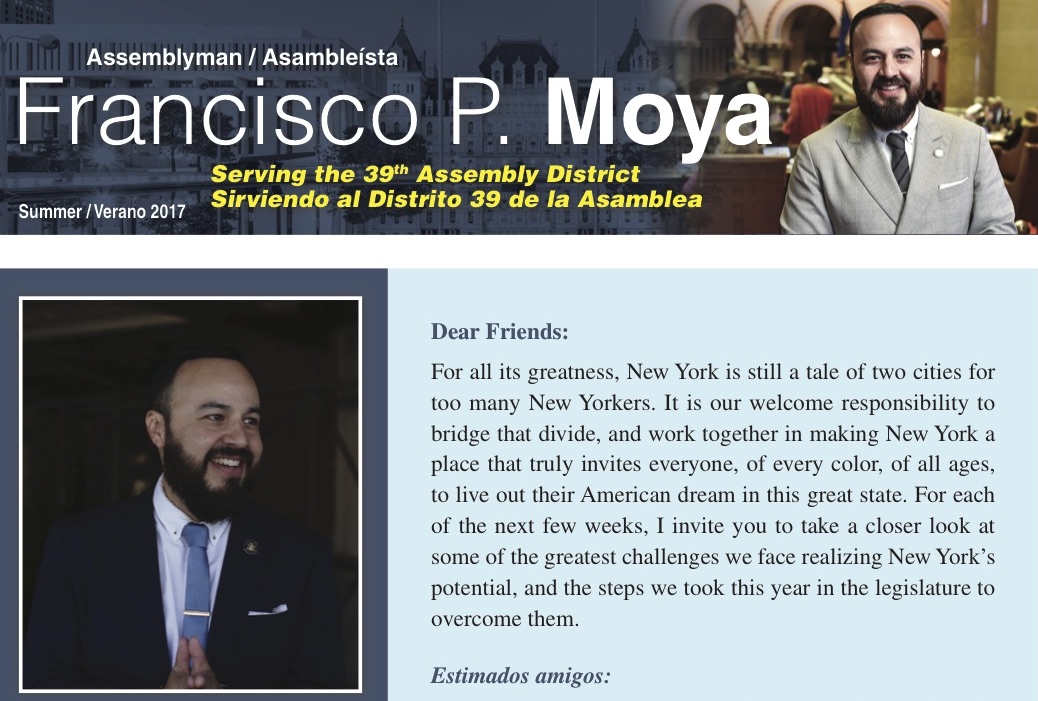 In a written response to the CFB on Monserrate’s complaint, Moya noted, correctly, that “as an Assemblymember my mail cut off deadline is different than sitting City electeds.” In a statement to Gotham Gazette, Moya had harsher words for his opponent. “My opponent is a convicted felon who has zero credibility on this or any other issue in the campaign,” he said. “He is using these baseless claims to attack my record of public service, and direct attention away from his corrupt, violent history. These charges have been easily refuted by my campaign, and simply bear no resemblance to the facts.”

Moya went on to criticize Monserrate for his own misuse of taxpayer funds. “The questions voters are asking are, ‘Hiram, where is our money that you stole and how can we ever trust you again?’”

The CFB and the City are mostly powerless to bridge the gap in the law. “Obviously we provide extensive guidance on how candidates should handle constituent communications in the days leading up to an election, It’s certainly something we monitor,” said Matt Sollars, a CFB spokesperson.

Reinvent Albany’s Kaehny says closing the loophole would require the state Legislature to take action, “which it seems very unlikely to do.” In the absence of legislation, he said, “The best thing CFB could do is keep track and include as much information in their post-election report to note how much of a problem it is and bring attention to that.”

The CFB issues a comprehensive report after each city election that includes numerous recommendations on improving the campaign finance and election system. Many of the recommendations from their 2013 report were passed into law by the City Council.

Two other state Legislators are also running for “open” City Council seats, though no apparent complaints have been lodged against either. Assemblymember Robert Rodriguez, who has also sent out mass mailers from his office, is running for the District 8 seat currently held by term-limited Council Speaker Melissa Mark-Viverito; and in District 18, state Senator Ruben Diaz Sr., famous for his constituent e-blasts, which have continued apace, is vying for the seat being vacated by term-limited Council Member Annabel Palma.

Blair Horner, executive director of the New York Public Interest Research Group, another good government group, conceded that the CFB has no authority over the state and insisted that the Legislature should increase its own communication blackout periods to undo the advantage that accrues to lawmakers.

“Legislators wouldn’t send [mailers] out if they didn’t think it will bolster public good will,” Horner said, adding that perhaps it will fall to voters to ensure a level standard. “I think it’s fair for the public to urge state elected officials running for City Council to follow the same rules,” he said.