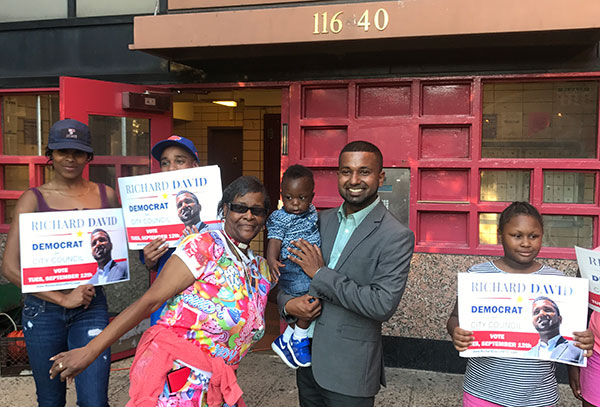 The July corruption conviction and August sentencing of City Council Member Ruben Wills created a newly-open seat representing Council District 28 in southeast Queens. Because of the timing of the vacancy, the seat will be filled through the normal electoral calendar, with the determinative September 12 Democratic primary rapidly approaching.

The 28th Council District includes neighborhoods such as South Jamaica, Rochdale Village, Richmond Hill, and Ozone Park. Along with the predictable subjects of corruption and ethical governance, the campaign is centering on education, senior citizen care, and housing affordability.

Competing for the seat are Adrienne Adams, a long-time Community Board 12 member who entered the race shortly after Wills was convicted, and, given widespread establishment support, has emerged as the frontrunner; Richard David, a Community Board 9 member and employee at the city’s Administration for Children’s Services; and Hettie Powell, a lawyer and community activist. David and Powell had declared for the race while Wills was under indictment, but before he had been convicted. As soon as Adams jumped into the fold, she was quickly endorsed by many Democratic elected officials and organizations.

But where Adams’ campaign lags behind in funds and miles accrued on the campaign trail, she makes up for in those endorsements and, likely, in name recognition given that she ran for state Senate in 2016, unsuccessfully challenging Senator James Sanders but making a name for herself, and has been involved in the community for years.

In recent weeks, Queens Congressional Reps. Gregory Meeks and Joe Crowley, along with the larger Queens Democratic Party that Crowley runs, and City Council Member Corey Johnson have endorsed Adams, along with 32BJ SEIU, the large building services workers union. On Tuesday, Adams was endorsed by Governor Andrew Cuomo. The candidate attributes these endorsements to having worked closely with elected leaders during her time heading and being active in the community board.

“I feel that I am the most qualified candidate for this seat,” Adams said in an interview. “I have been a member of Community Board 12 since 2009. I was quickly appointed to education chair of the community board in 2010 and was elected in 2012 to chair the board. I was since elected to my third term last December, to continue to chair the board, happily,” said Adams. “I have also been sitting at the table with our elected officials and others since 2009.”

During an August 24 debate on NY1 featuring the three major candidates, Adams made a similar case for her candidacy, touching upon her time on the community board. “I am involved in decision-making and policy as the first line of governance to our local elected officials. I believe that I am the most qualified candidate on the ballot because of my 24-by-7 dedication to my community,” she said.

Powell, for her part, has the backing of several organized labor groups such as SEIU 1199, Teamsters Joint Council 16,  DC 37 Local 372, as well as housing advocacy group TenantsPac.  She feels her support is a testament to her years fighting for those in Queens in her time as a lawyer at Queens Law Associates. “I have been in this community for 35 years,” she said. “I have been working on behalf of all the residents in this community. I have been getting things done.”

In the NY1 debate, Powell again spoke about what she believes to be her strengths as a candidate as well as what she plans to do if elected. “We will work together to bring senior services, quality education for all our children, making sure that we have safe streets and our seniors get the service that they deserve,” said Powell. “I will continue to work for all the residents at all times, putting them first,” she said. “I am the best qualified, I have the years of service, dedicating my time for that job.”

“The strategy of the campaign is one of direct voter contact,” said Powell’s campaign manager, Peter Brown, when asked about the endorsements competition. “Having said that,” Brown continued, “it’s not surprising she’s getting support from significant unions because she’s a very viable, strong progressive candidate who offers results and honest leadership to the district.”

As for policy priorities, Powell aims to make her pitch to voters on improving police-community relations, education and housing affordability. “They want to be able to have the education they’re looking for without going outside of the district,” she said. “They're looking for better partnerships with the police making sure police are safe, that our residents are safe,” said Powell. “They are looking for affordable housing making sure that the people who live here, our hard-working residents who are working everyday and cannot afford to live -- they are looking for affordable housing in the district.”

David, born in Guyana and now living in Ozone Park, has a hopeful message for a district that has been repeatedly burned by corrupt politicians. “We’re ready to move forward,” David said in an interview with Gotham Gazette. “We need to unify the district and bring everyone together.”

“This is my first time running for public office,” said David during the NY1 debate. “I am running because we are a district emerging from corruption. We have a unique opportunity to elect the right person who is going to bring representation to our people, who have been neglected for a long time, on day one.”

David went on to detail his community engagement which he believes gives him an awareness of the district’s needs, along with a track record of selfless service. “In addition to being on the Community Board also for nine years what I did at night was tutor kids, helping over 300 young people in our district graduate from college,” he noted. “The people in District 28 are looking for new leadership. I think now is the right time to try something new,” he said.

Though he lacks the lists of endorsements touted by others, David was endorsed by the Communications Workers of America and a few other groups, as well as City Council Member Eric Ulrich, a moderate Republican of a nearby Queens district. “I have a lot of respect for Hettie [Powell], but I do think I can do a better job as an elected official because I’ve actually worked in government,” he said when asked to compare himself to other candidates. “I’ve actually testified in the City Council on different legislation.”

In his campaign website biography, David’s campaign says his time at the New York City Economic Development Corporation helps give him the right background to represent District 28 in city government. It says that his work at EDC helped him learn both how government works and how to help improve neighborhoods.

Should he be elected, David said he’d tackle issues such as the disparity between high property taxes and a disproportionately low amount of funding being allocated into resources southeast Queens residents use. “We have one of the highest home ownership rates, whether it’s as cooperators or private homeowners,” he writes on his campaign website. “We also pay some of the highest property tax assessments,” he continues, “[y]et, hardly any of this funding seems to come back to our district. Homeowners are continuously being asked to pay more, and we get far less, from higher water rates, insurance, and fines. We must make owning a home in Southeast Queens more desirable and relieve some of the burdens the City has unfairly placed on homeowners.”

Along with these policy priorities, David aims to bring unity to an area divided by ethnic and geographic lines. Having lived on both sides of the Van Wyck, David believes he is uniquely fit for the task. The Van Wyck, in addition to serving as a popular thoroughfare connecting Queens and the Bronx, forms a geographical divider between ethnic enclaves. The north side, which includes Jamaica, is predominantly African-American, while the Ozone Park and Richmond Hill neighborhoods have large immigrant communities, including Caribbean-American, Central-American and Indian-American populations.

Adams, however, believes her background makes her the most qualified for the seat. She says the most important policy issues in the race are education, housing affordability, senior care, and “quality of life” issues such as homelessness.

Adams also aims to unify both sides of the Van Wyck Expressway, which, she says, intersects with education policies. “The Richmond Hill side of the Van Wyck has a significant South Asian population and a Caribbean population,” she said. “We see the pervasive theme in the community: education and the fact that the children have a language barrier. That significantly affects their quality of education,” she added. “So what people in the community are telling me is that we need to close that communication gap between the children and the education system.”

On the other side of the Van Wyck, Adams said, “we’re taking a look at significant sanitation issues. We also have education issues as well, which we know. And we only have one high school that is lacking significant resources and has been under threat for closure for a number of years. We also have schools that lack resources still to this day.”

More than any particular policy, Adams’ says he personal mission to to make sure everyone in her home borough has a high quality of life, like that which her family enjoys. “They’re beautiful people with families of their own and I believe that my children and my grandchildren deserve a great quality of life just like other communities enjoy a great quality of life,” she said. “So I am committed to becoming one of the leaders that makes sure that happens for my family, and for the families of others in southeast Queens.”

With Wills’ conviction looming over the race, corruption has become an important factor as the candidates make their final push ahead of the September 12 primary. In the NY1 debate, the three candidates each made their case that they will be ethical if elected. “I am an independent thinker and my track record speaks for itself. So as far as there being a cycle [of corruption], I will stand on the record I have as community board leader for so many years,” said Adams. Some, including her opponents, have questioned her ties to the Queens Democratic machine, led by Crowley, which had been supporting Wills as he sought reelection while under indictment.

“I’m an attorney, practicing for 25 years. We have a strict code of ethics to follow,” Powell said. Certain people, she contended, only seek office for personal benefit, bringing heightened need to examine the reputation of those seeking political office. “I have been in this community for 35 years. I have used my personal money to start programs to help young people, [such as] mentorship programs,” said Powell.

“We have an elected official in District 28 who had remained in office without financial powers...for over six years,” David said of Wills and his ability to allocate discretionary district funds being stripped by the Council. “Our community lost resources during that time,” David added. “At the point of an indictment,” he continued, “an elected official should be removed from office. It should not be at the point of conviction.”