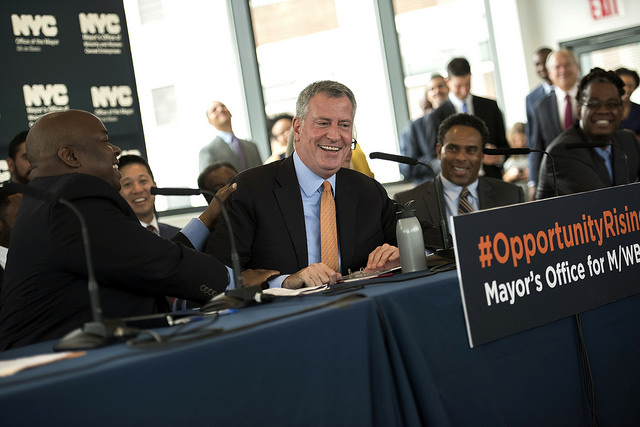 Since Mayor Bill de Blasio created the Mayor’s Office of Minority and Women-Owned Business Enterprises last September, Deputy Mayor Richard Buery has been focused on establishing a system of accountability to meet the new targets set by the de Blasio administration for contracting with M/WBE firms and helping those firms to build capacity.

Appearing last week on the “What’s the [Data] Point?” podcast from Gotham Gazette and Citizens Budget Committee, Buery, who is Deputy Mayor for Strategic Policy Initiatives and led the rollout of de Blasio’s signature universal pre-kindergarten program, explained some of what he and his staff are doing to hold city agencies, officials, and contractors responsible for increasing the city contracts awarded to M/WBEs.

A key aspect has been “about changing culture and holding people accountable in a different way,” Buery said, noting that the contracting officers at different city agencies can be stuck in a comfortable pattern of awarding contracts to companies they are familiar with, perpetuating an opportunity imbalance that hurts firms owned by women and people of color. He also described a schedule of meetings somewhat in the mold of the NYPD’s famous CompStat gatherings at which he hears reports from city commissioners and contracting officers and pushes them on meeting targets and making progress.

Last year, de Blasio announced the creation of the new M/WBE office in a self-described “bold new vision” after periods of contentious back and forth with city Comptroller Scott Stringer, who released several reports critical of the administration’s efforts in M/WBE contracting. Setting an ambitious goal of awarding 30% of annual city contract dollars to M/WBEs by 2021, the mayor said that “[w]ith the new Office of M/WBEs and Deputy Mayor Buery’s leadership, we are in a stronger position to continue delivering results for the City’s M/WBEs.”

In fiscal year 2016, that number was 14% -- of the roughly $15 billion in contracts the city awards annually. Buery told podcast hosts Ben Max of Gotham Gazette and Carol Kellermann of CBC that the administration would soon be announcing its fiscal year 2017 numbers. (The city’s fiscal year begins July 1, with fiscal 2018 now into its third month.)

To reach the administration’s new goal, Buery said he has made M/WBEs a persistent topic of conversation in city government. He and his staff hold regular meetings with commissioners, chief contracting officers, and M/BWE officers in each of dozens of city agencies. He also leads a quarterly meeting, he said, during which he addresses citywide trends, celebrates certain agencies, and criticizes others. “If we don’t talk about it regularly, people are not going to look at it and not going to try make changes,” he stated.

In addition to overseeing city agencies, his office drives efforts to hold prime contractors accountable. Citing the saying, “If it’s not measured it can’t be managed,” he explained that the city requires general contractors to do business with a stated percentage of M/WBEs if hired, as part of the process of releasing a request for proposals and awarding contracts to bidders. While contractors may have valid reasons for missing M/WBE targets, Buery said, there needs to be a conversation to ensure they expended every effort in their attempts.

On the podcast, Buery also stressed that the city is on “a good trajectory,” citing an increase from an 8% inclusion rate when the administration first came into office to the most recent reported figure of 14% in fiscal year 2016.

The more aggressive stance, including the new office and the addition of Buery’s leadership came in response to consistent criticism on M/WBE contracting.

In 2015, Bertha Lewis, founder of the Black Institute and a one-time de Blasio supporter, called the administration “incompetent and immoral” for not awarding more contracts to M/WBEs. From 2014 onwards, Stringer released critical reports and argued that de Blasio’s investment in M/WBEs was, what he termed in an interview with WNYC, “a disgrace.”

Buery’s response has been unfailingly upbeat. “We are well on our way to awarding 30% of the value of our contracts to this important community of businesses,” he said to the New York Daily News in response to Stringer’s 2016 criticisms.

There is additional reason for optimism courtesy of recent developments at the state level that the city sought. The state legislature overwhelmingly voted to grant New York City increased discretion in its M/WBE policy in June. Among multiple measures, the bill allows the city a higher threshold in contract amounts it can award to M/WBEs without going through a full, competitive bidding process. Although the administration is waiting for Governor Andrew Cuomo to sign the bill, Buery said on the podcast he is sure the governor will sign it and that he and his staff are “already figuring out how to implement it.”

Giving a wider frame, Buery said he sees his efforts overseeing the Mayor’s Office of M/WBEs as part of the administration’s greater quest to “create a city that works for everyone.”

“Because the city is such a big buyer of things, part of our power is an engine of economic opportunity by making sure that we give everybody a chance to be a part of doing business with the city,” Buery said, “by giving everyone a chance to share their expertise, their knowledge, their know-how.”