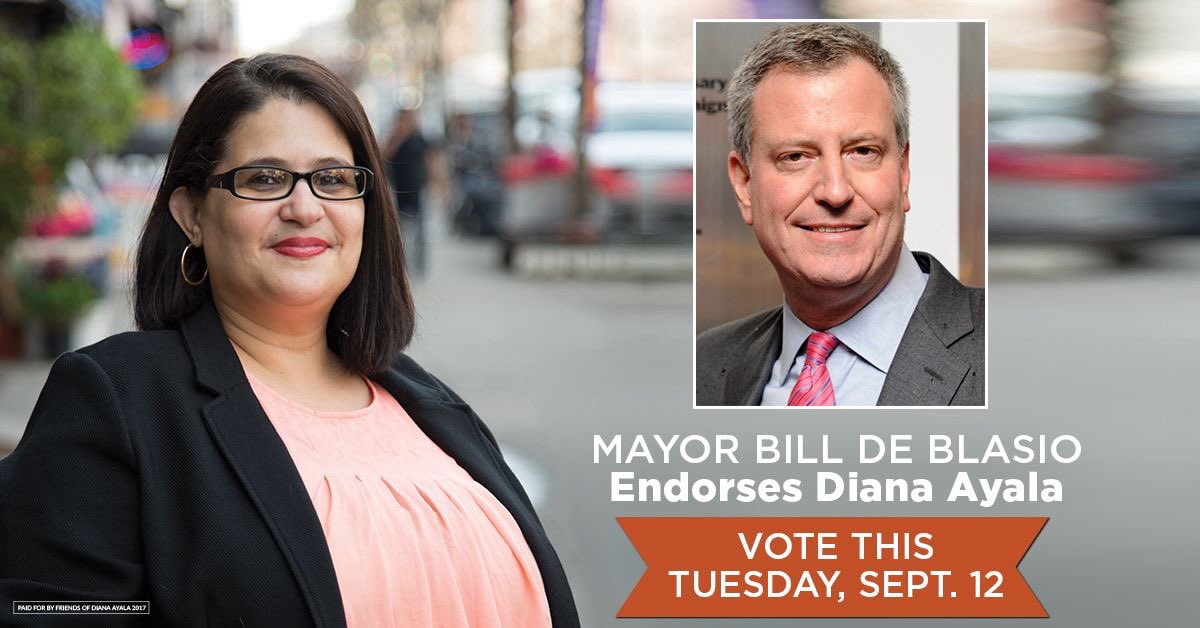 Mayor Bill de Blasio is a heavy favorite heading into Tuesday's primary election, which includes numerous races across the city for which the Democratic primary is determinative of the next officeholder. In certain City Council races, de Blasio has endorsed candidates for the primary, including a small flurry of support just a few days before voters head to the polls, in what could be a sign that the mayor and his allies are concerned about turnout.

But it’s unclear what effect, if any, the mayor’s endorsement will have on Council races and what victories, or losses, by his preferred candidates will mean for the incumbent mayor’s likely second term. Like any mayor, de Blasio must work with the City Council to pass key priorities, whether legislation or land use projects. The mayor takes some measure of risk by getting involved in contentious primaries, but may also reap the reward of having supported the next City Council member.

“The Mayor is proud to endorse Councilmembers and candidates across the City who have been progressive champions for their communities,” said Dan Levitan, a de Blasio campaign spokesperson, in an email. Levitan did not respond specifically to Gotham Gazette’s questions about how the mayor decided in which races to endorse.

“It all depends on the district,” said Doug Muzzio, political science professor at Baruch College, CUNY, of the effect the mayor’s support will have. “His endorsement in some districts will be fatal and in others, it will be a net-positive.”

“It’ll be a test to see what kinds of coattails he has, particularly in what portends to be a very low turnout election,” Muzzio said, acknowledging he hadn’t studied closely de Blasio’s Council endorsements. Samuel, for example, is running in a crowded primary in central Brooklyn, and de Blasio was on the campaign trail with her this weekend. He also campaigned with Ayala, who is locked in a tough head-to-head with Assemblymember Robert Rodriguez.

Muzzio said that endorsements “don’t really mean much” and that voters are more likely to be swayed by the campaign’s get out the vote efforts. “The mayor and the candidate feel that there’s a value in being endorsed by the mayor. It’s sort of a tautology,” he said. “It’s true because it’s true.” And if a preferred candidate loses, Muzzio said, it can be spun negatively against the mayor. “The mayor’s got no clout” could be one argument or “The voters reject his agenda,” could be another, he said.

One prominent Democratic strategist, speaking on the condition of anonymity, said that de Blasio’s Council endorsements signal something about the mayor’s campaign. "The mayor's last second endorsement blitz overlaps very strongly with his base areas - it could mean they are a little worried about driving out their voters,” the strategist said. “It's a smart move by the mayor because these candidates winning or losing does not matter much in the end to the mayor and he's going to be able to significantly amplify his election day field operation."

Indeed, de Blasio himself and his campaign representatives have indicated they expect a very low turnout election. The mayor has implored Democrats to get out to vote. His main primary opponent, former City Council Member Sal Albanese, has expressed optimism about Tuesday’s results.

There’s no reliable metric to gauge the effect of an endorsement, said George Arzt, a longtime Democratic political consultant who is only involved in the District 38 Council race where de Blasio has not intervened. Short of conducting costly exit polling, it’s hard to tell if the mayor’s endorsement has any effect, he said. “I’ve never found there is a strong transferral when someone endorses,” he said.

He noted the clear risks and rewards that could accrue for the mayor. “The risks are that the person who he didn’t support wins and votes against him on issues of concern,” Arzt said. “The reward is that you get a friend who will vote for you for major issues.”

Arzt also emphasized the resulting spin from the results, because “you don’t know who’s gonna win.” And he doesn’t expect all of the mayor’s favored candidates to be victorious. “That’s never the case and will never be the case,” he said.

De Blasio did not choose to endorse candidates in many competitive races taking place across the city. For instance, in District 35, where Council Member Cumbo is facing a strong primary challenge from Ede Fox, the mayor did not make an endorsement, but his team at City Hall has lent material support to Cumbo’s campaign. The race has increasingly become a referendum on the mayor’s affordable housing and rezoning policies, revolving around the proposed redevelopment of the Bedford Union Armory, and closer association with de Blasio could mean a death knell for Cumbo’s reelection.

Hank Sheinkopf, a veteran political consultant, said the mayor’s endorsements could be helpful, particularly in districts with large populations of middle-aged black women, who Sheinkopf termed “the perfect voter” or those most likely to turn out to vote. It’s a demographic that continues to support de Blasio. “You could argue that in Caribbean-American, African-American neighborhoods, his endorsement will have value,” Sheinkopf said.

He noted though that in District 35, a potential mayoral endorsement “cuts both ways.” His support would encourage turnout by black voters, he said, but would also hurt Cumbo’s chances.

But Sheinkopf emphasized that issues on which the mayor is not well-liked -- affordable housing, homelessness, quality-of-life -- differ from district to district. In areas where affordable housing is being built, for instance, the mayor’s endorsement may help. And in areas where homeless shelter siting has become an issue, it would undoubtedly be a negative. “In order for an endorsement to work, it has to be specific to the district,” he said.

Mayoral endorsements work in places “where people will have an emotional bond for the mayor,” he said, otherwise it’s simply a “pro forma gesture.”

In certain races, the mayor’s involvement could also mean upheaval. De Blasio has not weighed in on the Brooklyn District Attorney’s race, which is one of the most important races in the city this year. The race, where Acting District Attorney Eric Gonzalez is considered the frontrunner, has revolved around reforming the DA’s office rather than stronger enforcement of crimes. Most of the candidates have sought to show more leniency in enforcement of low-level offenses, particularly in cases involving communities of color.

“What’s playing there is that white ethnics don’t like the mayor and whoever he endorses, they would turnout against,” Sheinkopf said. “So staying out of it was smart.” The mayor’s intervention, he said, would also lead to larger discussions about stop-and-frisk policing, quality-of-life offenses such as public urination -- which was decriminalized under this administration -- and the safety of NYPD police officers. “Whoever he would try to help would be hurt by it,” Sheinkopf added.

One possible outcome of de Blasio’s involvement in City Council races is what sway he has in helping to choose the next Speaker of the City Council. The position will be filled in January by the next class of Council members. In 2013 into 2014, de Blasio had significant pull as he was at the height of his prowess after dominating the election, and he helped install Melissa Mark-Viverito to the powerful post. Council members backed by de Blasio in tough elections this fall may be more easily persuaded to back a de Blasio-preferred speaker candidate come January. The opposite could also very well be true, of course.

In District 49, Democratic primary candidate Kamillah Payne-Hanks didn’t seem perturbed by the mayor’s endorsement of Council Member Debi Rose. “It wasn’t surprising,” she said. “I think it’s expected and it doesn’t change what we have to do. It’s up to the voters.”

She stressed that she has run a positive campaign focused on her priorities, which include workforce development and middle-class housing in the proposed Bay Street corridor rezoning. “People have some issues with [the mayor] but they’re not my issues,” she said. “Whether or not there’s enough of those people remains to be seen. I think I ran a good race.”

Pia Raymond, who is challenging Council Member Mathieu Eugene in District 40, believes the mayor’s endorsement will not swing voters one way or the other. “I’m confident that the voice of the community will resonate, I’m confident in our democracy,” she said.

“The beautiful thing is our community is independent minded,” she added, stressing the ethnic, racial, and class diversity of the district. “I’m confident they will vote on their experience within this community. I don’t think their experience can be influenced by one person.”