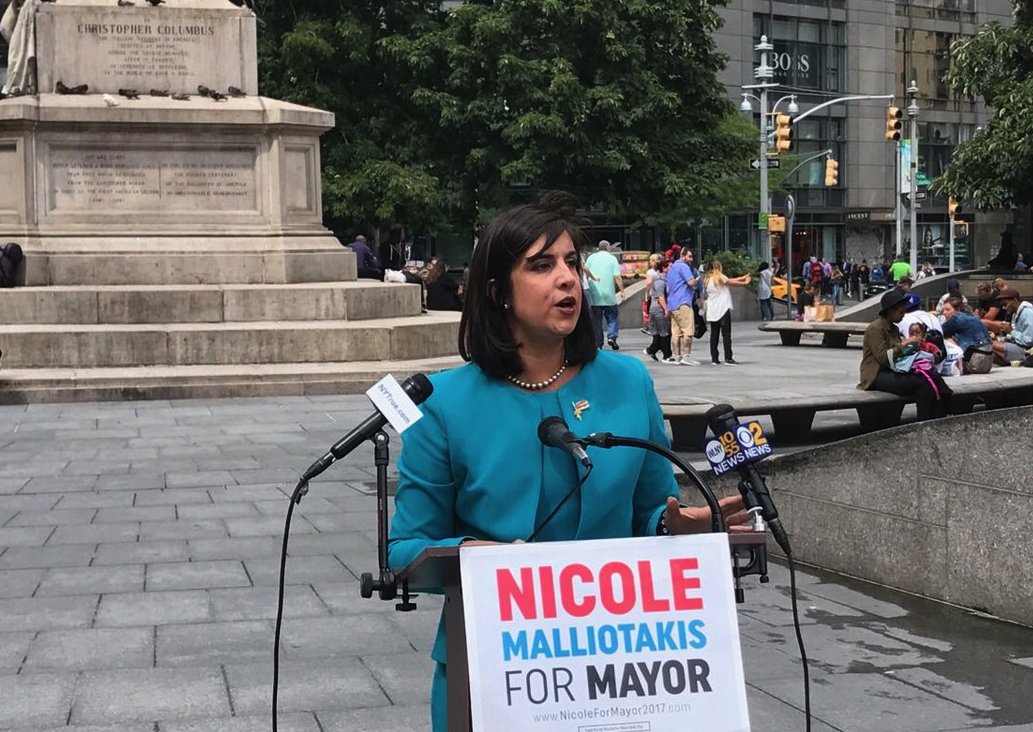 Staten Island Assemblymember Nicole Malliotakis is the Republican nominee for mayor and, with the primary election over, the city’s political focus has now shifted toward her bid to unseat incumbent Democrat Bill de Blasio, who handily won his primary on Tuesday. In that effort, she’ll have to also best independent Bo Dietl and others on the ballot in November.

Malliotakis is seeking to become the first female Mayor of New York City, as well as the first Latina and, at 36, the youngest since John P. Mitchel assumed the office in 1914 and the third youngest ever.

Throughout the months since she entered the race, she has been making political declarations, explaining her stances on issues, and unveiling several somewhat detailed policy agendas on particular topics, like homelessness and education. It has also been clear that she still must develop more policy stances and proposals, which the general election season should entice.

Malliotakis has attempted to move to the center somewhat as the election has gone on and it became clear that she would not have to win a Republican primary after clearing the field. She's seeking to define her candidacy not so much on ideological or philosophical lines, but on management -- running the city's day to day operations and providing good services to New Yorkers, with a focus on "quality of life" issues like "traffic, transit, and trash."

Meanwhile, however, de Blasio has sought to label Malliotakis as a Trump-voting conservative out of step with the values of most New Yorkers. While Malliotakis says she did vote for Trump over Hillary Clinton, she was a major Marco Rubio supporter in the Republican presidential primary. She has been endorsed by the New York Conservative Party and is one of the city's roughly 523,000 registered Republicans (there are more than 3.4 million registered Democrats).

Malliotakis has been highly critical of de Blasio on a wide variety of issues and she has made clear dozens of policy, program, or political promises so far, many of which we have identified here in a list of 25.

1. Have the NYPD enforce “quality of life” crimes more strongly. Malliotakis believes that a relaxation of enforcement against low level offenses has caused a dip in quality of life, and that the NYPD should use criminal not civil enforcement of laws against offenses like public urination. She would also increase littering penalties.

2. Reverse the diminished use of stop-and-frisk under de Blasio, but not to Bloomberg levels.

3. Fix Rikers rather than close it, and won’t build new jails in the boroughs.

5. Implement a metric system to identify which city programs are achieving results and which should be eliminated or reformed.

6. Cut Mayor's City Hall staff by at least 10%. And, in order to curb budget growth, which has increased significantly under de Blasio, “limit spending to a New York City based CPI growth plus population growth, excluding federal and state aid.”

7. Never leave the country when the city is mourning.

8. Increase the city’s financial contribution to the MTA Capital Plan, and use the new infusion of funds to finance signal repair.

9. Adjust the threshold for the commercial rent tax, which adds a burden to many Manhattan businesses, so that fewer must pay.

10. Freeze property taxes and reform system to make it equitable.

11. Require a City Council supermajority for all tax increases.

12. Require a portion of all city contracts be awarded to military veterans.

15. Hire more judges and prosecutors to reduce backlog in the city’s courts, which can lead to people being stuck on Rikers without a trial.

16. Repeal two-week scheduling law, which Malliotakis claims has a negative effect on small business owners who don’t know what their situation will look like two weeks into the future.

17. Lesser penalties for asking salary history. In principle, Malliotakis says she supports the new law banning employers from asking about salary history, an effort to help bridge the gender pay gap, but she believes the punishment attached, which can levy fines up to $250,000 on small businesses for violations, are too high. She instead favors a lesser penalty like that passed in Albany, around $2,500.

18. Increase speed limits on major arterial roads. Malliotakis has claimed that Vision Zero, the mayor’s plan to eliminate traffic deaths, has reduced outer-borough drivers to “second class citizens,” in part due to the lowered city speed limit of 25 MPH for many roads.

20. Expand vocational training, for both students and homeless people so that more individuals are trained for jobs.

21. Create “permanent assisted housing” for homeless people with severe health issues. Work with Governor Cuomo to establish “New York/New York IV” agreement to build supportive housing for people with substance abuse and mental illness. (Supporting housing is already being built by both the city and the state, but Cuomo and de Blasio did not sign such a cooperative agreement.)

22. Keep the statue of Christopher Columbus standing in Columbus Circle. Mayor de Blasio has not given an opinion on the statute, but has formed a commission to look at “symbols of hate” and other monuments around the city.

23. Audit city contracts with consultants and vendors to identify waste and misappropriated tax dollars, including by tightening controls of Department of Education spending and contracting.

24. Appoint only an educator as Chancellor of the Department of Education.

25. Fix the city's animal shelter system to give animals a better chance at adoption.

The general election is on November 7.