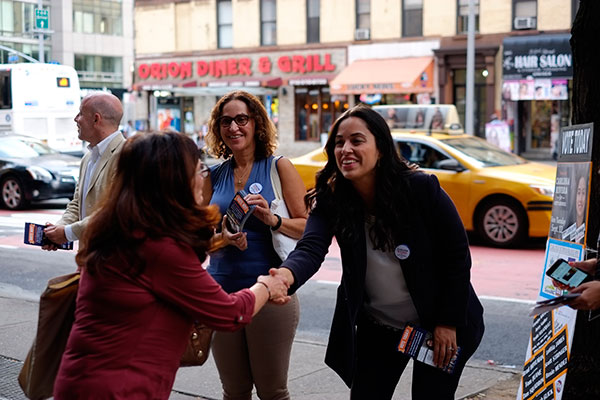 As the sun rose over the brick facades of the East Village, Carlina Rivera stood on the corner of 1st avenue and 10th street with a handful of flyers. It was 6:30 a.m. and the first-time candidate for elected office was petting dogs, telling children to stay in school, and asking voters to make her the next City Council member representing District 2.

“I just got a text from my mom. She's voting for me,” Rivera said between greetings.

About 15 minutes after Rivera had arrived at her first campaign stop of the day, near a 1st Avenue polling station, she was blending campaigning and constituent services -- 52-year-old Robyn Bolden asked Rivera about her problems with receiving disability. A long-time aide to outgoing City Council Member Rosie Mendez, Rivera entered Tuesday’s primary election day as the favorite in a crowded Democratic field, the winner of which would be virtually assured the seat given the district’s Democratic tilt. Rivera had Mendez’s endorsement and primary day support.

A police car rolled down its window; the officer inside leaned out and shouted “Good luck!” Another man approached Rivera, cellphone in hand. “My nephew went to school with you,” the man said, adding that the nephew had texted him to vote for her.

Several people stopped to shake the candidate's hand, give words of encouragement, or ask her about her candidacy. Other passersby didn’t stop, some muttered something about not voting, and a couple told her they were voting for a competitor. Rivera shrugged and smiled.

“Well, 6,000 votes to go!” she said cheerily as she climbed back into her car at 8 a.m., headed to the polling site outside NYU’s Palladium Hall. She would ultimately receive more than 8,000 votes.

There, Rivera and her team contended with a steady stream of apathetic students wearing earbuds. New York City Comptroller Scott Stringer, stumping for Rivera before heading off to help the campaign of District 4 candidate Keith Powers, remarked that he had been retail campaigning so long he could still remember when the Sony Walkman disrupted efforts to woo voters near subway stops.

A couple of people recognized Rivera from the ubiquitous posters with her likeness in businesses around the village. City Council Member Corey Johnson, a Council Speaker hopeful with no primary challenge as he cruises to reelection, dropped by to help with the glad-handing. One of Rivera’s opponents, the former Obama administration staffer Ronnie Cho, walked by, with actor and fellow Obama alumnus Kal Penn in tow. The two candidates exchanged greetings.

After NYU, the next stop was the Masaryk houses, where Rivera was welcomed with a series of hugs and words of encouragement in Spanish from well-wishers, many of whom knew her personally; she’d grown up only a couple of blocks away. A few had known her since Rivera, now 33, was a child. “Where is it, where do I vote?” a middle-aged man asked as he walked by. Rivera pointed him to the polling place.

This stop brought into sharp focus one of the key refrains from the day on the campaign trail: a sense of neighborhood belonging. On multiple occasions Rivera or her staff assured wary voters, who felt burned and bewildered by developers and other interlopers, that she had in fact grown up in the community. The message was conveyed in English, Spanish, and Chinese to young men on skateboards and senior citizens with walkers alike. They were worried about the mixed-used development that had sprung up in what seemed like a week running down the south side of 14th street, about the indifferent newcomers in a gentrifying Manhattan area, about the vanishing bodegas.

Rivera and her staff and volunteers were more than happy to brave the promise of a grueling day due to an acute feeling of high stakes. In what is a mayor-centric system of government, New York City Council members do have an extraordinary amount of weight when it comes to matters of land use in their districts. They also have influence in the budget process, in oversight of city agencies, and opportunity to bring discretionary funding to local nonprofits, parks, and schools in their districts.

As the day wore on and the fatigue set in, at stop after stop, as the candidate and her devotees competed with jobs and phones and the M14D crosstown bus for voters’ attention, the thought of becoming the next guardians for the Lower East Side kept their resolve. The district is full of small businesses going under and people being priced out of their homes.

In Rivera, who is of Puerto Rican descent and grew up walking the very streets she had now campaigned on for months – “I loved going to Stromboli’s as a kid!” she told a volunteer of the pizza place on St. Mark’s – some saw familiarity, and with it, comfort. Several people could remember her specifically giving them a hand while she was working at Good Old Lower East Side, a nonprofit, or as a Council staffer under Mendez, who joined Rivera at several polling places.

Most of the conversations that Rivera had with various potential constituents related to housing. One man said his landlord was now courting exclusively NYU students. “They think it’s a dorm,” he said, and asked Rivera to help when she was elected. She wrote her number down on a campaign flyer and handed it to the man.

Outside the complex, a middle-aged woman led another woman by the hand towards Rivera and said, in Spanish, “I brought a friend to vote for you!” As the group walked back toward their car, a man shouted that he had tried to vote for Rivera but he hadn’t been allowed to. “I’m a Republican,” he explained.

The importance of a sense of neighborhood fellowship didn’t always work to Rivera’s favor. A couple of times, she was asked about a recent New York Post story that called into question her longtime residence in a Stanton Street apartment using the federal Section 8 subsidy for lower-income people, while her husband, Community Board 3 Chair Jamie Rogers, owns an apartment in the Lower East Side. At the NYU Palladium poll site, she spent a few minutes arguing with a white-haired man who repeatedly said “that housing is for working families.”

“The Post didn’t get their facts right,” Rivera retorted, and told the man she would move out of Section 8 if she won the election, adding that if she didn’t, “you can be the first to call me out.” As a Council member Rivera’s salary would jump to $148,000 a year. Outside P.S. 34 on 12th Street, an older woman told Rivera that, although her habitation of the apartment was legal, there was a “moral and ethical component” she was flouting. Rivera spent several minutes calmly addressing the issue; 10 minutes later, the same woman walked by and winked. “You got my vote,” she said.

Rivera meandered over to the corner with Avenue D, where a volunteer for rival candidate, Jorge Vasquez, was standing with a handful of flyers. “Hey, good luck. It’s a long day, huh?” she told the volunteer, who nodded in agreement. They spent a couple of minutes sympathizing about the strain of a long day of campaigning. Soon, she was joined by Public Advocate Letitia James, herself running for reelection (she won the Democratic primary), whose buoyant personality brought several passersby to laughter.

When she went to cast her own ballot, Rivera voted for herself, and for incumbent Mayor Bill de Blasio, she said, at P.S. 140, where she also chatted with Council Member Mark Levine, another speaker candidate who helped her woo voters. De Blasio and Rivera had previously endorsed each other. Asked by a voter later what she thought of the mayor, Carlina was cautious, touting the mayor’s accomplishments – she mentioned the IDNYC municipal ID and his ambitious affordable housing proposals – while maintaining that the mayor could do better.

“He’s learning a lot of very good lessons,” she said, and affirmed that she intended to work with him to deepen housing affordability.

Along with Cho and Vazquez, Rivera was competing with Mary Silver and Jasmin Sanchez. Silver and Cho were expected to be her biggest obstacles to victory. Rivera ran her campaign based on her experience as an aide to Mendez and her other work in the district. In debates, she showed commanding knowledge of district issue, legislation, and key processes involved in a Council member’s job, such as those related to moving bills or land use projects. She had the backing of many elected officials, labor unions, and political clubs.

Throughout the day, Rivera was upbeat and easygoing, joking with voters and volunteers. She took very few breaks; the day was about the work. On multiple stops she was joined by her husband, Jamie.

At one of the candidate’s last stops, at around 5 p.m. near the P.S. 47 polling station on 23rd Street, she linked up with one of her more effective surrogates: her mother, Maria Ortiz, a civilian employee of the NYPD, who everyone in the neighborhood seemed to know. Over the next two hours, at several other stops, Ortiz led voters, often by the hand, to meet her daughter. “All the seniors are out for Carlina,” she said.

After 15 hours on the ground, the campaign’s staff and volunteers gathered at sideBAR, on Irving Place, to eat, drink, and watch the results come in on NY1 starting after polls had closed at 9 p.m.

As early results started coming in, the crowd of some forty or fifty cheered every time the screens displayed Rivera’s commanding lead. It would not dissipate; Rivera ended the night the winner of the Democratic primary, with almost 61% of the vote, well ahead of any rival. She received about 8,140 of the roughly 13,000 votes cast in the district. Silver finished second with just under 2,200 votes.

Rivera is almost certain to win the general election on November 7, but she does have to defeat her opposition. If victorious she will keep one of the 13 seats in the 51-member City Council that are currently held by women.

In an interview after her win, Rivera seemed equal parts excited and exhausted. “The first issue is affordable housing. I have proposals for NYCHA, tenant protections,” she said. She said she looked forward to working with all of her fellow incoming new Council members, and all the rest.

Holding a microphone and standing before the crowd of people that had worked days and nights and weekends to get her elected, Rivera thanked Mendez, who stood beside her. “What I’ve learned from Rosie,” she said, “is to value experience, and passion, and to never, ever back down.”