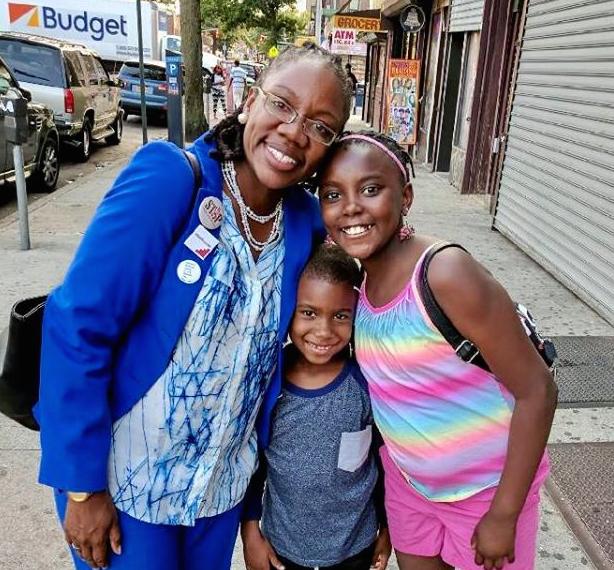 It was late Tuesday afternoon, primary day, in Brooklyn, and amidst the rattle of the subway and wafting aroma of a not-far-off Popeyes fried chicken restaurant, Alicka Ampry-Samuel danced on the sidewalk with Corey Johnson, a current City Council member from Manhattan, to “Ain’t No Stoppin Us Now.” Although the outcome of Samuel’s race -- she was a leading candidate in the crowded Democratic primary for the open City Council District 41 seat -- was uncertain, the atmosphere was quasi-celebratory, with family, friends, and supporters swaying to the beat blaring from speakers stationed nearby. It was a moment of levity during a day of grueling campaigning.

The competition for the seat was fierce. Ampry-Samuel was one of nine candidates on the primary ballot, in a district encompassing portions of Bed-Stuy, East Flatbush, Crown Heights, and Ocean Hill-Brownsville, where the Democratic primary winner would be assured the seat given no candidates from other parties are running.

Vying to replace Darlene Mealy, a long-time Council member widely considered ineffective, the candidates were seeking the opportunity to better represent one of the poorest and neediest districts in the city. For Ampry-Samuel, primary day meant exhaustive hustling across the district in a last-minute pursuit of votes. It meant dozens of handshakes and leaflets with her face and name on them, and visits from the likes of Johnson, a candidate to become the Council’s next speaker, from Mayor Bill de Blasio, himself seeking a primary election victory, and others.

Samuel, dressed in bright red, entered primary day with optimism and a resume packed with political experience. She was a former district leader, chief of staff for Assemblymember Latrice Walker, and most recently a senior advisor at NYCHA. However, she was realistic about her chances, acknowledging the crowded field, which included multiple candidates who also have strong resumes.

In an interview, Ampry-Samuel said “we know that a lot of folks don’t come out for the local elections.” And she was right, with just 10,557 votes cast in her primary. But, she received enough of them -- 3,320 votes, or 31% -- to prevail, besting the second-place finisher, Henry Butler, who received 2,318 votes, by 1,002, a margin less than the 1,197 votes received by third-place finisher Cory Provost and just a few more than the 915 votes good for fourth place.

Ampry-Samuel started Tuesday out on the street, greeting commuters near the subway entrance on Ralph Avenue and Fulton Street in Bedford-Stuyvesant. Stating that she “was clearly exhausted,” she said she was also “energized.” On what she termed her “third wind,” given the long months of campaigning, she approached the largely thankless task of handing out fliers with cheer and charm. After one man said his wife’s last name was Samuel, she replied, “So, you gotta vote for your cousin!”

Ampry-Samuel canvassed during rush-hour traffic along with prominent politicians in the community, including Congressional Rep. Yvette Clarke, the wizened former Rep. Edolphus Towns, and childhood friend Latrice Walker, still an Assembly member from nearby.

“We out here in these streets, girl!” exclaimed Walker, dressed in bright pink and especially energetic.

Not only did Samuel accrue the endorsements of most relevant local politicians, she had managed to reel in the biggest fish in the pond, de Blasio. Having previously endorsed her candidacy and campaigned with her over the weekend, he arrived at Ralph Avenue and Fulton Street to support her, and his own campaign, accompanied by men whispering into their sleeves, a communications team, and additional police officers.

Although Ampry-Samuel said de Blasio’s “endorsement is a positive for the community,” his presence was somewhat divisive. While they were talking up voters, a driver in a pickup truck yelled, “Boo de Blasio! Anybody but de Blasio!” Earlier in the morning, Samuel had a tense conversation with a woman who pointedly asked, “Why do you support de Blasio?” And a young man named Anthony explained that although he supported Samuel, that “in a sense, yes” it bothered him that she and de Blasio were associated.

Samuel responded to this criticism, explaining that “we gotta get a seat at the table.” By accepting the mayor’s support, she is gaining a powerful ear in city government, attention that could be leveraged for the community’s benefit. As Dion Turner, her brother, said in an interview, “If you’re not at the table, you’re just a menu.”

Many were happy to see de Blasio, though.

Surviving the madhouse of the mayor’s awed admirers, Ampry-Samuel and her team took a quick breather before leaving the subway stop, setting off to engage residents in the many public housing developments of Brownsville, a neighborhood that has the highest concentration of public housing in the nation.

Having grown up in Brownsville public housing herself, Ampry-Samuel seemed at home embracing those she saw on the street. As she greeted friends, family, and voters, a campaign aide pointed out that she was “giving things a personal touch.”

Clutching a coffee from Dunkin’ Donuts, Ampry-Samuel eventually strolled past two women near the Van Dyke Houses. They were wearing deep blue shirts printed with the name of opponent, Henry Butler.

Placing second in the primary with 22% of the vote, Butler is a native of Bed-Stuy and District Manager for Community Board 3. Although he had stopped by the subway entrance earlier that morning and proclaimed that “we’re all good Democrats,” he had a contentious relationship with Ampry-Samuel and her campaign.

Dion said that there had been a lot of “negativity created by him” and alleged that his supporters were “tearing down posters.” He expressed frustration with Butler’s blue-shirted backers who he claimed disrupted Ampry-Samuel and de Blasio that morning by “putting posters behind de Blasio’s head.”

Despite any of that, Ampry-Samuel joked good-naturedly with the women wearing Butler t-shirts and went on to schmooze with residents near the Van Dyke Houses. Having chatted up friends and strangers, Ampry-Samuel entered the latter half of primary day and took a needed rest at her campaign headquarters.

“I’m just ready for nine o’clock to come and go,” she vented to her friends, referring to when polls closed.

Joining a small convoy led by a minivan plastered with campaign posters, Ampry-Samuel soon set up shop in the late afternoon in front of the subway entrance on Rockaway Avenue. Biggie Smalls blasted from speakers in her campaign vehicle. With the volume way up, Ampry-Samuel enjoyed the moment and connected with voters returning home.

“It sounds like she really cares about the community,” said Jonathan, a student studying journalism and media.

Community was a recurring theme in Ampry-Samuel’s campaign. Having grown up in the area, her extensive family was her campaign’s foundation. In fact, she said in reference to nearby supporters that “for the most part, most of the people that you see are family.” Throughout the day, her cousin, brother, aunt, and mother were all seen trekking through the streets to support her.

Her husband, a U.S. diplomat working in Washington D.C., even flew in to visit. “Even as we were traveling across different countries, she’s been focused on this community,” he explained, wiping sweat off his wife’s brow with a paper towel.

Community issued dominated the campaign and appeared to determine voters’ choices. Anthony, the same young man who said de Blasio’s support for Ampry-Samuel bothered him, criticized Butler, saying he represented the interests of Bed-Stuy, not those of Ocean Hill-Brownsville.

Conversely, Kenneth, a Butler supporter from Bed-Stuy, praised him. “He lives in the community I live in. He’s trying to work for the community,” he stated, canvassing near the Atlantic Towers.

Under the waning daylight, with campaign fliers littering the sidewalk, Samuel sat near the same Atlantic Towers, visibly fatigued. An hour before, she had voted with her son in tow and had spent the remaining time before polls closed near a popular voting site, flashing the same broad smile at residents she had early that morning.

“I feel exhausted, but emotional because it was such a long day, and emotional because there was just a lot of love out there in the entire district,” said Ampry-Samuel. Polls were set to close at 9 p.m., 15 hours after they opened.

Anxious, she and her family, friends, and supporters went to a nearby lounge to watch the election results. With music playing in the background and balloons hovering near the ceiling, the numbers came in earlier then expected.

At one point, “Jeeps, Lex Coups, Bimaz & Benz” by Lost Boyz played over the lounge’s loudspeakers. Ampry-Samuel danced in celebration. Effectively Council Member-elect, Ampry-Samuel will be sworn in come January, part of a new class of 51 City Council Members. One early and big question for her is whether she will be more effective than her predecessor. At a recent candidate forum, Ampry-Samuel promised to bring th energy and attentiveness to the Council that she says she has brought to all her other public service roles.

Reached by phone the morning after the primary, Ampry-Samuel said, “There were tears of joy.”