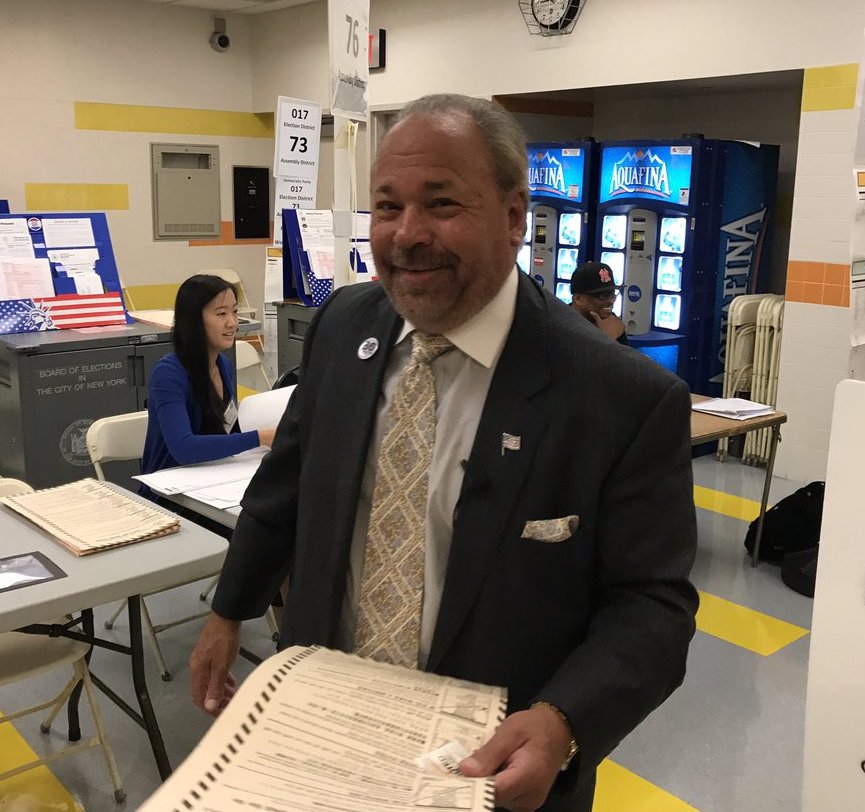 Six weeks from now, on November 7, New Yorkers will head to the polls to decide whether to renew the contract of Mayor Bill de Blasio, or if they want new leadership from one of the incumbent Democrat’s opponents in the general election.

The latest mayoral race poll, from NBC 4 New York/Marist, was released on September 19 and shows de Blasio well ahead of his main challengers -- Republican nominee Nicole Malliotakis and independent candidate Bo Dietl. De Blasio received 65 percent from likely voters, including undecided ones, while Malliotakis received 18 percent and Dietl 8 percent. Sal Albanese, a former City Council member and lost by a wide margin to de Blasio in the Democratic primary, will also be on the ballot on the Reform Party line, but he was not included in the poll. Michael Tolkin, another runner-up to de Blasio in the primary, has also created a separate general election ballot line called “Smart Cities,” while several other candidates will also be on the November ballot, such as Green Party mayoral nominee Akeem Browder.

Coming out of primary day with a massive win, securing 74.2 percent of the vote, de Blasio continues to hold a strong fundraising advantage, and his spending on an extensive ground game and media campaign has overshadowed his opponents. The most recent campaign finance filings, covering the period between August 29 and September 18, show the mayor raising campaign cash at a comfortable clip, with a majority of contributions under $175, which qualify to be matched at a 6-to-1 ratio under the Campaign Finance Board’s public matching funds program.

De Blasio raised just over $272,000 in this last filing period, and his campaign expects that to reach $400,000 with the second round of payouts of public matching funds. This period also coincided with the rollout of a massive ad buy for his campaign, resulting in more than $3 million in expenditures. Of that expenditure, $2.51 million went to airing television ads and $175,000 to digital ads. Overall, the mayor has raised $5.25 million, and received $2.86 million in public matching funds before the September 12 primary. Having spent $5.78 million so far, he has about $2.34 million in cash on hand, with new public money expected soon.

“Our campaign’s grassroots fundraising has only picked up the pace since our strong showing on Primary Day,” said Rick Fromberg, de Blasio’s campaign manager, in a statement that also touted the mayor’s first-term record on crime, affordable housing, and pre-kindergarten.

Malliotakis, a state Assemblymember who represents parts of Staten Island and a sliver of Brooklyn, has also stepped up her fundraising, coming close to de Blasio in this last period with $241,000 in contributions. She spent nearly $300,000 in the same period, of which about $200,000 went to television ads. Malliotakis has struggled to garner name recognition outside of her home borough of Staten Island, with 49 percent of likely voters in the NBC 4 New York/Marist Poll saying they had never heard of her and 17 percent saying they were unsure of how to rate her.

Her campaign has not taken off in terms of fundraising, but it is buoyed by having hit the threshold for public matching funds, and is expecting a $1.6 million payout from the CFB later this week. By qualifying for the funds, “we open a whole new chapter in my campaign to retire Bill de Blasio,” Malliotakis said in a statement. “New Yorkers understand that Bill de Blasio has failed New York City and its residents, that’s why we are receiving the donations needed to turn this race into a competitive election.”

In total, Malliotakis has raised more than $734,412 and spent $571,462, leaving her just $162,950 in her campaign account without public funds. She also surpassed the dual thresholds of campaign expenditure and spending and required poll numbers to face de Blasio on the stage for two official CFB-sponsored debates ahead of the general election. The first is scheduled for Tuesday, October 10, just two weeks from now.

Dietl, the Trump-like former NYPD detective who runs his own private investigation firm, raised just under $20,000 in the last filing period and spent about $80,000. Unlike the other candidates, Dietl did not purchase any ads and has largely relied on social media to get his message out. He has raised just over $1 million overall (including $100,000 from a personal loan he gave his campaign) and spent a little more than $800,000, leaving him with $208,898. He is not participating in the public matching program, so he will not receive any additional funds through the Campaign Finance Board.

Albanese’s campaign has been a small-dollar affair throughout. In the last filing period, he raised just $6,360 and spent $4,424. Much of Albanese’s campaign cash was depleted last month when he made big expenditures to qualify for the Democratic primary debates. Since he joined the race, he has managed to raise $214,141 and has spent $190,081, leaving $24,060 in his coffers.

There are more than a dozen other candidates also running for mayor. Tolkin raised about $234,000 in contributions and spent about $192,000 in his latest filing. Tolkin’s filings also show $5.4 million in total fundraising and expenditures but a majority of that falls under “in-kind” contributions, in the form of services and branded merchandising that Tolkin claimed for his campaign.

The Green Party’s Akeem Browder, brother of Kalief Browder -- the young Bronx man who was imprisoned on Rikers Island for three years on charges of stealing a backpack that were later dropped, beaten and put in solitary confinement, and later committed suicide after being released. Browder, who has criticized de Blasio’s ten-year timeline for closing the scandal-ridden Rikers jail complex, has raised $1,887 and spent just $100.