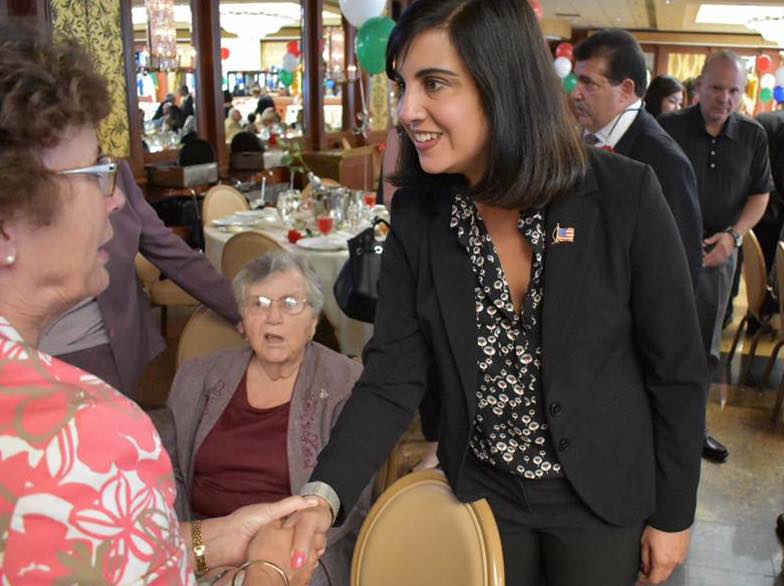 While Malliotakis will have a major infusion of funds to get her message out and build her low name recognition across the five boroughs, she will also have to compete, at least for one important night, with the louder voice of a third mayoral candidate who threatens to debilitate Malliotakis’ chances of pulling off the long-shot upset of de Blasio, an incumbent with significant advantages in the race.

On Wednesday, independent mayoral candidate Bo Dietl, a brash former NYPD detective running on his own “Dump the Mayor” ballot line, announced that he had been invited to the first of two official mayoral debates ahead of the November 7 general election. Not only will Dietl pose a challenge to Malliotakis’ debate prospects in terms of positioning her opposition to de Blasio, but his inclusion immediately means more media attention and legitimacy for Dietl’s campaign.

The debate, scheduled for Tuesday, October 10 is organized by the New York City Campaign Finance Board and was mandatory for those participating in the CFB’s public matching funds program, which matches qualifying small-dollar contributions up to $175 at a 6-to-1 ratio. Malliotakis and de Blasio are participants in the program and Dietl is not, but he met the $500,000 debate threshold for campaign fundraising and spending and was also included in recent polling by NBC 4 New York/Marist.

“While Dietl is not enrolled in the campaign finance program, we have decided to invite him based on his showing in a recent poll and his regular presence on the campaign trail,” said a spokesperson for Charter Communications, a debate sponsor and parent company of NY1, which will air the debate, also hosted by WNYC radio and other partners.

Dietl’s presence derails Malliotakis’ chances of a one-on-one, substantive debate with de Blasio -- he is a pugnacious, unpredictable character in the vein of Donald Trump -- but also threatens to further cut into votes that Malliotakis hopes to win. The two candidates share similar views and likely voters on a variety of issues, and their criticisms of the mayor are largely indistinguishable on many fronts. Both are significantly more conservative than de Blasio on most issues.

As it stands, in a city with six registered Democratic voters for each registered Republican, a conservative candidate has a limited constituency from which they can draw support and Dietl and Malliotakis have all along both been endangered by the likelihood of splitting anti-de Blasio votes. There is a significant number of party-unaffiliated voters to woo as well as moderate Democrats and Republicans, but most of the votes in play for Dietl or Malliotakis are largely out of the de Blasio target area to begin with.

Recently, Dietl has gone after Malliotakis, accusing her of filing fraudulent ballot petition signatures and insulting her at debates. Either purposely or not, he regularly mispronounce her name or refers to her in dismissive terms. Dietl argues that he is the only viable candidate who can defeat de Blasio and has called on Malliotakis to drop out of the race, which is is very unlikely to do.

“We’re surprised that the Bo Dietl traveling circus is included in the first debate,” said Rob Ryan, a Malliotakis campaign spokesperson, in a statement. “Nevertheless, Assemblywoman Malliotakis will hold Bill de Blasio accountable for his failure to solve the homeless crisis, fix our broken subway system and educate and keep our kids safe in our schools. She’s ready to take on Bill de Blasio and demand answers, it will be a great debate.”

While Dietl will continue to be a headache for Malliotakis and a distraction from her mission, the GOP standard bearer did receive some much more positive news this week.

On Thursday, the CFB approved a $1.52 million in public funds to be paid to Malliotakis’ campaign, bolstering her campaign coffers which held only $162,950, giving her a much-needed boost ahead of the debate and the final six weeks of the general election.

The added funds and the first debate may both help Malliotakis build much needed name recognition, including by spending more on advertising, and can also lead to the ability to bring in more money as the campaign continues -- a necessity if she is to run a viable campaign and make a stronger showing than Republican Joe Lhota made in 2013 against de Blasio, when Lhota received 24 percent of the vote to de Blasio’s 73 percent. In fact, on Friday Malliotakis' campaign announced her second video advertisement, attacking de Blasio on the issue of the subways, which the mayor does not control.

Malliotakis jumped into the mayoral race relatively late, in April, at a time when a well-funded candidate, millionaire real estate executive Paul Massey, was considered the frontrunner. After Massey dropped out, and other candidates failed to make an impression, Malliotakis quickly emerged at the front of the pack. But the three-term Assemblymember has struggled to raise her profile outside of her home borough of Staten Island and, somewhat relatedly, has not been able to raise especially significant funds for her campaign. Overall, she has raised $734,412 and spent $571,462.

Dietl, on the other hand, has relied on a network of wealthy allies to raise about $1 million, and has spent about $800,000.

Neither of them have come close to de Blasio, who has raised more than $5.25 million for his reelection and has received nearly $3 million in public funds. He has spent $5.78 million so far.

De Blasio’s campaign spokesperson, Dan Levitan, did not appear worked up by the news of Dietl’s inclusion in the first debate. “We are looking forward to discussing the Mayor's record of achievement, his vision for making New York City more affordable, creating 100,000 jobs and continuing to improve our schools, and how important it is for New Yorkers to turn out to vote for a Mayor who will stand up to Donald Trump,” Levitan said in a statement.