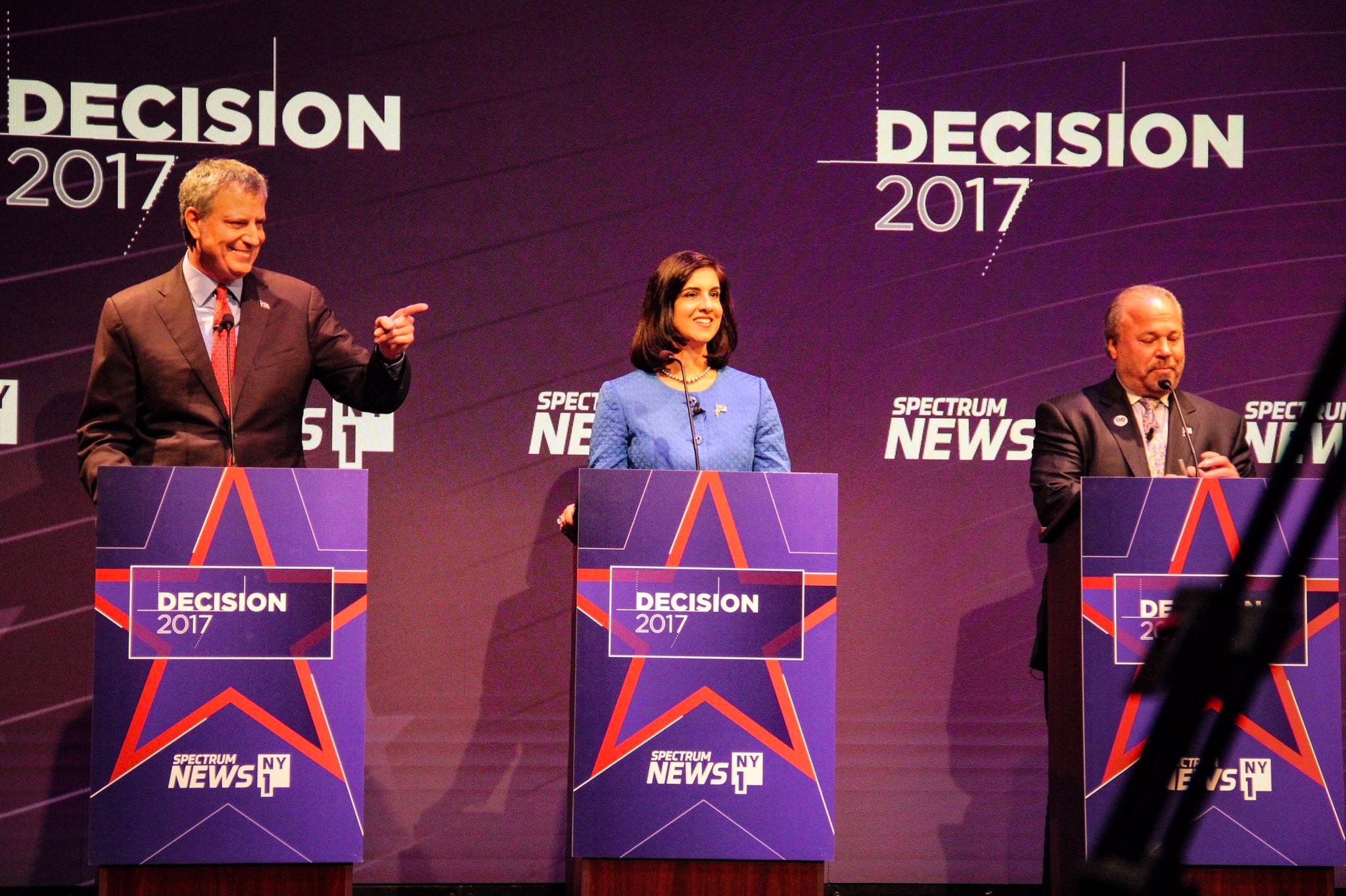 The first mayoral debate of the general election verged on the brink of chaos for the better part of 90 minutes as Mayor Bill de Blasio faced challengers Nicole Malliotakis and Bo Dietl in front of a raucous, disruptive audience at the Symphony Space on Manhattan’s Upper West Side on Tuesday.

While attacks flew throughout the night, largely from Malliotakis and Dietl toward de Blasio, on more substantive matters, the debate was largely a two-person contest, between de Blasio and Malliotakis, a sitting Republican state Assembly member. Dietl, a former NYPD detective running on his own party line, largely shouted during his opportunities to speak, while also grunting into his microphone and regularly interrupting others. Within minutes of the start of the debate, the audience -- which appeared to include groups of supporters of each of the three candidates -- howled and heckled, drowning out the candidates and drawing sharp rebukes from debate moderator and NY1 anchor Errol Louis.

Throughout much of the debate, substantive policy discussion took a back seat to yelling and interrupting, whether by Dietl and Malliotakis or their supporters in the crowd. With varying degrees of success, the challengers took turns lambasting de Blasio, the progressive Democratic incumbent, who defended his policies and his first-term record while criticizing both his opponents as “right-wing Republicans” who voted for President Donald Trump.

Malliotakis fared far better in both critiquing and responding to de Blasio, offering certain policy alternatives and pointed criticisms of his administration. On the other hand, Dietl struggled to articulate cogent responses to specific policy questions and veered off into tangential arguments and ad hominem attacks. At one point he had his microphone cut-off by the debate moderator for repeatedly interrupting.

As she has been on the campaign trail for months, Malliotakis offered sharp attacks on de Blasio over his leadership, budgeting, stewardship of the school system, and more. “We have so many issues that are plaguing our city,” she said at one point, arguing that with record-high spending, de Blasio is not showing enough results.

As expected, Dietl’s and Malliotakis’ positions hewed close to each other, with de Blasio playing the foil. Both challengers critiqued the decriminalization of low-level “quality-of-life” offenses such as public urination; they were both in favor of modernizing Rikers Island jails rather than shutting them down; they both called for more fiscal restraint in city budgeting; and they both supported dedicating more city funds to fix mass transit problems. Neither of them offered a viable affordable housing plan or a strategy for desegregating city schools. And both distanced themselves from Donald Trump, while embracing certain aspects of the Trump aesthetic.

When asked what they would do differently on tackling homelessness, both Malliotakis and Dietl attacked de Blasio for what is possibly his most prominent failing. Malliotakis insisted the city needs to invest more in vocational training and in supportive housing, and also critiqued the mayor for inadequate services for mentally ill New Yorkers, especially those with the most severe illnesses. De Blasio has “turned homelessness into a business,” she said, noting the city’s use of emergency hotel shelters and the plan to open 90 new homeless shelters. “This mayor’s done nothing for the homeless and I wanna do something,” said Dietl, briefly floating the idea of creating “homeless centers” on Ward’s Island and Randall’s Island without elaborating what those would entail.

De Blasio pointed out that his administration is aiming to reduce the shelter footprint by stopping the use of hotels and cluster sites as new shelters are built. He pointed to the city’s targeted outreach efforts to aid homeless people, the comprehensive ThriveNYC mental health program, and the investment in legal aid for tenants in housing court to help them avoid evictions. “These are the kinds of things that are necessary to ultimately fight and win the battle over homelessness,” he said, conceding that it will be a long, tough battle again a problem growing over decades.

On de Blasio’s core campaign agenda of tackling income inequality, both Malliotakis and Dietl said he has failed. She said the real “tale of two cities,” coopting de Blasio’s 2013 campaign line, was that the mayor’s friends and donors have benefited in the last four years while the city has suffered. Dietl echoed the argument.

De Blasio, in response, touted universal pre-kindergarten among the successful measures that will have helped 281,000 New Yorkers out of poverty by the end of the year. He also mentioned 3-K for all, his plan to extend preschool to three-year-olds over the next several years.

The mayor also faced criticism for the large increase in the city’s budget under his watch, though he defended himself by pointing out that the city has settled 99 percent of municipal labor contracts, all of which were expired when he took office, and put away a historic amount of funding in reserves. Major investments, such as hiring 2,000 new police officers and thousands of pre-K teachers, had added to the budget but were necessary for improving the city, he said. Malliotakis, a conservative, vowed to bring spending under control and said she would, among other things, cut from the hundreds of special assistants that de Blasio has hired at City Hall. She has not offered other areas of the $85 billion budget she would cut, however.

Dietl, meanwhile, found himself defending his own financial acuity, having had a history of unpaid taxes that made headlines earlier this year. In responding, Dietl said he has addressed the back taxes and is moving along with a payment plan. He explained he has been successful in private business and said he made $1.8 million last year.

All three were asked whether they would support closing Rikers jails or keeping it open. The mayor has supported a somewhat vague plan to shut down the problem-ridden jail complex in ten years, a solution contingent on continually reducing crime in the city and creating four borough-based jail facilities, although he has yet to lay out further details.

“Rikers Island, a jail on an island, that makes sense,” said Dietl, adding that “we’ve gotta fix what we’ve got.” Dietl favors reforming Rikers and investing heavily in rehabilitating inmates. Malliotakis, similarly, insists the city needs to retrofit the buildings and make them more humane and safer for both inmates and corrections officers. The mayor’s plan for borough-based jails, she said, would be “heavily rejected” by neighborhoods.

“I actually think that people of this city are much more willing to take on these tough choices,” de Blasio retorted, citing the fact that several Queens City Council members recently expressed support for reopening a detention facility near the courthouse in that borough.

De Blasio was asked a particularly pointed question about school segregation, particularly why he hasn’t moved more aggressively to integrate schools over arguing that his programs improve opportunities for all students whatever school they may attend. The mayor insisted on Tuesday that it’s a problem rooted in larger societal inequality and long history, and pitched an all-round “rising tide” approach through his Equity and Excellence program. He also said there is progress being made as individual school districts approach rezonings to desegregate schools.

Malliotakis, who earlier criticized the high percentage of high school graduates who require remedial courses for college readiness, said the Department of Education needs a complete overhaul. She was particularly critical of the DOE’s contracting processes and costly construction projects. Dietl said he would ban cell phones from classes and use a CompStat-like approach -- based on the NYPD’s crime statistics tracking system -- to target underperforming schools.

Since Malliotakis jumped into the mayoral race, de Blasio has sought to tie her to President Trump, while Dietl’s connections and resemblance to the offensive and irreverent President are all too obvious. On Tuesday, however, Dietl insisted that he is no right-wing Republican. “I’m a registered Democrat and I do not like Donald Trump and I do not like what he’s done…so I take exception to that,” he said of de Blasio’s remarks, but added that he did indeed vote for Trump last November.

Malliotakis, who also voted for Trump and has opposed certain policies of the president while supporting others, had a sharp retort about her stance toward the president. She told de Blasio her approach to the president was the same as the mayor’s to Governor Andrew Cuomo, his fellow Democrat. “When I disagree with President Trump, I’m going to say so,” she said, admitting that there are other times that she agrees with him.

Due to candidates talking over one another and the rowdy crowd -- at one point Louis had an audience member removed by security -- the debate was ended without closing statements.

Four other mayoral candidate who will be on the November ballot were not at the debate: Sal Albanese, of the Reform Party; Mike Tolkin, running on his Smart Cities ballot line; Green Party nominee Akeem Browder; and Libertarian nominee Aaron Commey.

The second “leading contenders” debate is scheduled for November 1 and it remains to be seen if Dietl -- who is not automatically included in the debate since he is not a participant in the CFB’s public matching funds program -- will be invited by the debate sponsors. For Malliotakis, there might be an opportunity to go head-to-head with de Blasio less than one week before voters go to the polls on November 7.