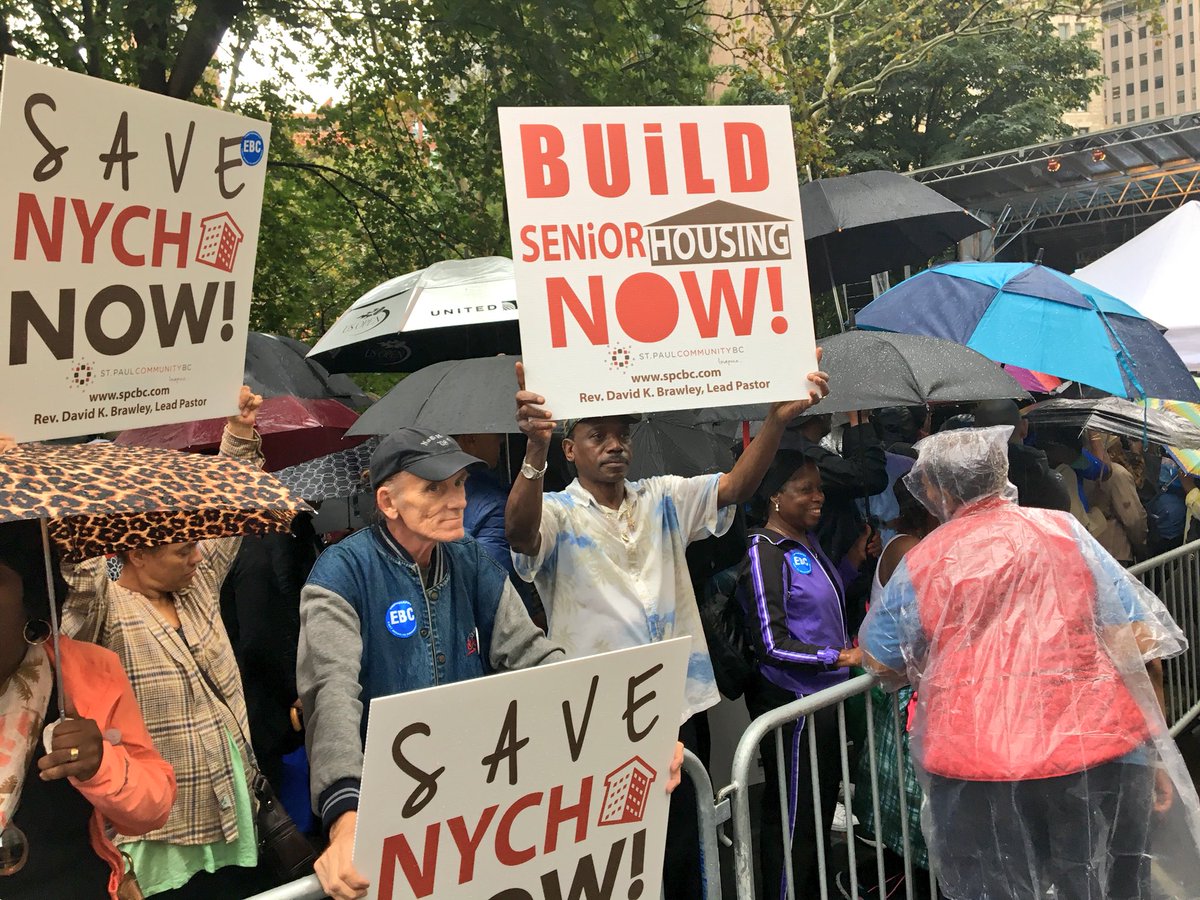 Thousands of New Yorkers, many of them residents of public housing, braved the rain on Monday, October 9, to rally outside City Hall to push Mayor Bill de Blasio to adopt a new direction for his affordable housing plan. Their alternative proposal, which had been presented by the leading advocates to the mayor ten days prior, calls for a radical investment in building new housing for low-income families, especially seniors, which critics say has largely been left out of the mayor’s current housing strategy.

But there’s disagreement over whether the plan is feasible and if the city, without state or federal resources, can commit to a sweeping addendum to an already ambitious affordable housing plan.

The leaders of the community proposal and rally, reverends from Brooklyn, achieved significant attention for their plan and support from elected officials, in part because their critique of de Blasio’s housing program touched the core tension of what some see as a solid, fairly moderate approach, but others call too timid to address the affordability crisis facing the city and its residents and, in some cases, a catalyst of detrimental gentrification.

De Blasio’s Housing New York plan aims to build about 80,000 new affordable units and preserve another 120,000 by 2024. By June 30, the end of fiscal year 2017, the city had financed 77,651 units -- 25,342 or 33 percent new units and 52,309 or 67 percent preserved. The mayor has declared the plan on time and within budget and earlier this year he also announced an additional $1.9 billion investment to create 10,000 more affordable housing for low-income earners, including 5,000 more dedicated senior housing units, for a total of 15,000 senior units under the plan. There are also projects in the pipeline to build 10,000 new units on underutilized NYCHA property.

But the organizers of Monday’s rally -- leaders of the Metro Industrial Areas Foundation and East Brooklyn Congregations, made up of church-going members, homeowners associations, schools, and senior centers -- say the plan isn’t building enough housing quickly enough, particularly for those at the lowest income tiers, and is ignoring the need for more senior housing. Their plan seeks to address these deficiencies, though the de Blasio administration says it is already doing most of what is being sought in the plan, while other aspects are not possible at this time.

The Metro IAF-EBC proposal specifically calls for 15,000 new senior housing units on underutilized NYCHA land, which it foresees would allow 50,000 people on NYCHA waitlists and in homeless shelters to move into apartments vacated by those seniors. The plan also advocates for refurbishing NYCHA developments across the city. Its proponents, while vehemently behind it, note that it is a starting point for discussion with the mayor and his team.

Mayor de Blasio, in a letter on October 7 responding to the coalition, wrote that he shares “the same values and goals: to build safe, clean, and affordable housing for all of our families at a faster rate than we have ever done.”

“I also agree with you that we have to make tough choices if we’re going to turn a corner in this crisis, and invest in our original affordable housing: NYCHA,” he added, before agreeing to collaborate, in a general sense, on the coalition’s ideas. He made no specific promises.

In an appearance on NY1 the night of the rally, Metro IAF-EBC coalition leader Rev. Shaun Lee, pastor of Mt. Lebanon Baptist Church in Brooklyn, said de Blasio’s response had been “disrespectful” so far. “They tried to placate us but they’re not really taking the plan seriously,” he told anchor Errol Louis.

The coalition has prominent allies, including Comptroller Scott Stringer and Public Advocate Letitia James, both of whom spoke at the group’s City Hall rally. A spokesperson for Stringer told Gotham Gazette that the comptroller believes the coalition proposal is financially feasible in conjunction with the administration’s current plan. The spokesperson did not elaborate when asked for details.

The de Blasio administration, although agreeing with the principle behind the plan, disagrees with that notion. Some of the ideas in the plan, said spokesperson Melissa Grace, are currently also being implemented.

“We agree with the group’s goals, and are already advancing them in many places across the city,” said Grace, in an email. “Deeper affordability? Those very lowest-income apartments now represent nearly 30 percent of our housing plan. Building on underused NYCHA land for seniors? We’ve closed on two senior projects, with more coming. We welcome the chance to work together to accomplish more.”

Among the pitfalls of the plan, the administration points out, are that it would require heavy subsidies from the city -- building only deeply affordable housing is extremely expensive -- and it ignores the need to build middle-income housing, something de Blasio regularly explains he is steadfastly committed to. Indeed, the proposal predicts creating 15,000 new affordable housing units would cost about $3.83 billion, including about $1.875 billion in city subsidies, through the Department of Housing Preservation and Development (HPD).

NYCHA also has a $17 billion capital backlog, and the advocates have been vague about how the city could address that without federal or state funding, other than insisting that the mayor must get “creative and imaginative” with funding solutions. “The money is there. The question is, where’s the leadership,” Brawley said in a phone interview. The coalition says the city must make good on NYCHA capital repairs so that, if its plan moves forward, people want to move into the NYCHA apartments that seniors would vacate as they move into the new homes being built, often into smaller units than they may now occupy, allowing larger families to move in.

The proposal did identify at least $225 million each year in new revenue sources the city could use -- $40 million in excess revenue from the Battery Park City Authority and $185 million paid by NYCHA to the city for sanitation, water and other services. A Metro IAF spokesperson also emphasized, as have its leaders, that the pace of NYCHA “infill” projects -- like the senior projects Grace referred to -- has been too slow and that four years into the affordable housing program, few have broken ground. Grace later pointed out that the $40 million was already committed to affordable housing projects, including in communities with NYCHA developments.

One aspect of the plan also proposes an alternative financing model for new developments through tax credits, tax-exempt bonds and Section 8 vouchers for 100 percent of the units. Using Section 8 vouchers, which are limited, at new projects on NYCHA land is also problematic, according to the administration. If Section 8 vouchers are applied, the city would require a waiver from the federal Department of Housing and Urban Development to allocate units to current NYCHA residents. HUD has in the past has approved an allocation of 25 percent for an area the size of a community board, according to City Hall. The Metro IAF spokesperson said, however, that these provisions of the plan are not necessarily red lines and that they are open to change.

The crucial point of the plan, said Brawley, is that the city needs to move beyond incremental increases in affordable units. “The city’s gonna have to work to do a critical mass of units. A few hundred units here or there will not do,” he said. He brushed aside the issues built into the system of constructing new housing -- the city’s process for competitive bids and the lengthy review of land use applications.

Public Advocate James, who brought Brawley to the general election mayoral debate on Tuesday night as her guest, has also recently started calling for a much more ambitious overall program of building new affordable housing, putting forth ideas like building more over rail yards across the five boroughs.

It remains to be seen whether de Blasio will be amenable to implementing some of the ideas from Brawley’s coalition -- Metro IAF has worked with the city to build multiple affordable housing complexes before. In the meantime, Brawley and Lee have vowed a sustained advocacy campaign. “We’ve increased pressure on mayors in the past to make things happen,” Brawley said. “And that’s what we’ll do. We’re going to see this plan through.”