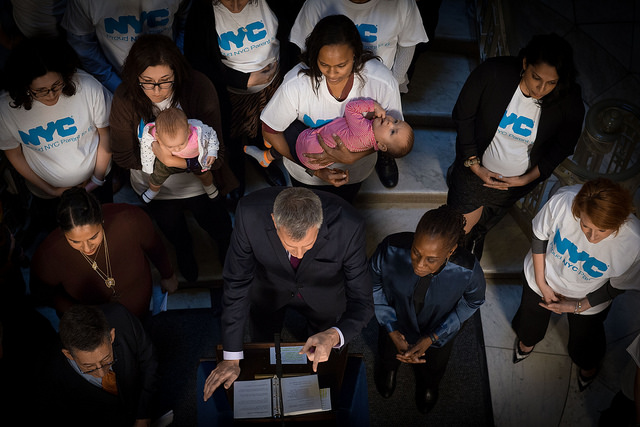 In the nearly two years since Mayor Bill de Blasio made six weeks of paid parental leave available to about 20,000 city employees, more than 400 have taken advantage of the added benefit.

The number through September 30 was 436 individuals, including an almost even split among men (203) and women (221), according to city data (12 who have utilized the program were “unknown” in terms of gender). The policy, announced by de Blasio in December 2015 and signed in January 2016 into retroactive effect beginning November 9, 2015, covers city employees who are not part of labor unions where such benefits must be collectively bargained. De Blasio and his aides have indicated that paid family leave is part of the recently-begun next round of contract negotiations with the city’s municipal unions.

Similar to his implementation of a $15 per hour minimum wage for city employees and those in city-contracted nonprofits, de Blasio’s move on paid family leave has been seen as part of the successful push for similar statewide programs that Governor Andrew Cuomo championed and pushed through the state Legislature in 2016.

"A parent never forgets those first few weeks after their baby is born, and we certainly did not want to stand in the way of those moments,” de Blasio said in a statement to Gotham Gazette. “Paid parental leave is a common sense policy that will make for healthier and more financially stable working families – making it good for employees and employers. We couldn't be happier that almost two years in it’s proven to be such a useful policy for our new parents."

Before de Blasio’s policy, city employees who wanted to take paid time off to be with a newly born or adopted child had to use vacation and sick days. Employees can still use those other days in addition to the six weeks provided by the city to its managerial and other employees not represented by unions.

According to city data provided to Gotham Gazette upon request, the 436 employees who have availed themselves of the new paid parental leave policy through September 30 average 37.5 years of age and seven years of service with the city. They work at 41 of 63 eligible agencies, a number that includes the Mayor’s Office. A total of more than 10,600 days had been used under the policy, with the average use 24 days.

When de Blasio announced the benefit in December 2015, a City Hall press release said the “new policy brings New York City in line with the most generous localities in the country, Austin and Pittsburgh.”

That press release also noted that the city was ready to enter negotiations with labor unions to extend the benefit to their members -- there are about 300,000 unionized municipal employees, including teachers, police officers, and many others. But, none of the contracts have been amended to include paid parental leave, so it is part of the equation in new contracts being negotiated.

A City Hall spokesperson for labor-related matters, Freddi Goldstein, told Gotham Gazette that “Paid Parental Leave is a benefit that that must be dealt with during contract negotiations and we’ll be having those conversations with all interested parties during the next round of collective bargaining.”

That round of bargaining is already underway for some unions. When de Blasio came into office in 2014, all of the city’s municipal labor unions were operating under expired contracts and there was a great deal of frustration among union leaders and members. De Blasio and his team, led by labor relations chief Bob Linn, moved quickly to settle new contracts, which included retroactive pay raises. But because some of the deals were going back several years, it is again time for a new batch of contracts and an established pattern, whereby the first major contract struck, with the teachers union for example, will establish guidelines for the contracts with other unions.

Beyond the obvious, the December 2015 announcement by the de Blasio administration also noted other reasons to offer paid family leave to employees: “Studies consistently show the positive impact of paid parental leave not just for employees, but also for employers and the people they serve – helping to reduce turnover, while ensuring that employees are able to return to work ready...Additional studies have found that families that benefit from paid leave are less likely to receive public assistance, and that the program can substantially reduce infant mortality rates and improve a child’s overall health.”

According to the city, the current program costs city taxpayers nothing additional, given that it is provided through “repurposing” of a managerial raise scheduled for this past July and of two vacation days allotted to the city’s longest-serving employees.

The state policy signed into law by Cuomo in April 2016, meanwhile, will cover employees at most businesses and nonprofits for 12 weeks of paid parental leave and will begin to be phased in starting in January 2018. It will reach full capacity in 2021, at which time eligible employees will be able to receive “67 percent of their average weekly wage, capped to 67 percent of the statewide average weekly wage.” The program will be funded via a small employee payroll deduction, it will not cost employers anything, other than minimal administrative work. Employees must have worked for their employer for six months to be eligible.

According to City Hall, the state policy will not change the city policy for its relevant staff, nor will it dictate collective bargaining -- it largely applies to the private sector.