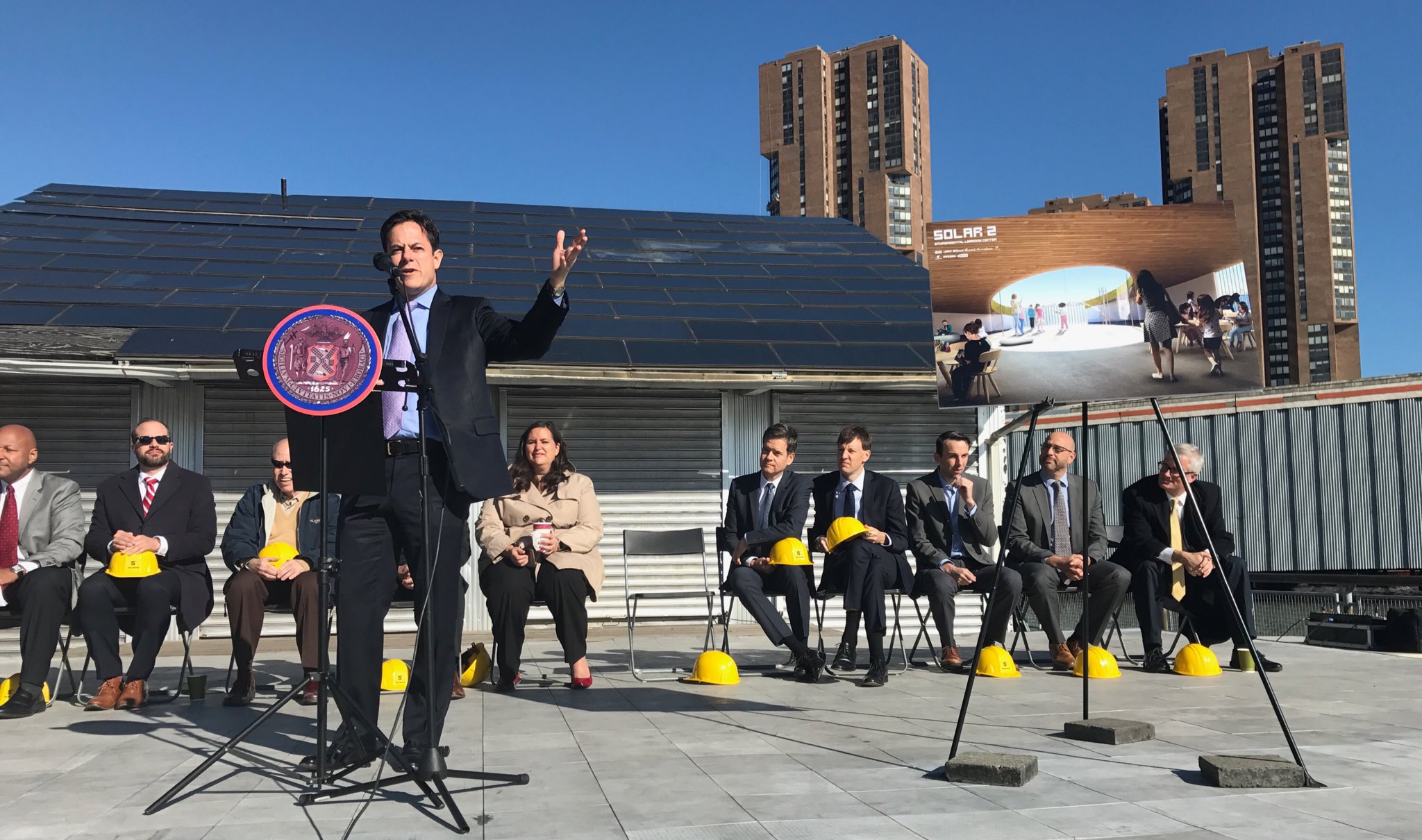 CM Garodnick speaks at a groundbreaking ceremony (photo via @DanGarodnick)

[editor's note: the bills discussed in this story have passed the Council since its publish; the headline has been tweaked to indicate that fact, but the story remains unchanged from its publish]

The New York City Council is set to pass a package of three bills that will expand its oversight of the New York City Economic Development Corporation, a city-affiliated non-profit that is instrumental in the city’s efforts to stimulate business and create jobs.

The EDC handles a wide array of projects and initiatives from infrastructure and real estate development to cultural projects and parks and public spaces. The organization’s work is at the center of Mayor Bill de Blasio’s plan to create 100,000 jobs over ten years that pay $50,000 annually, and it recently led the process for the city’s bid to host the second headquarters of retail giant Amazon. Hundreds of projects receive financial assistance each year from the city through EDC in the form of tax benefits, loans, grants, and even energy benefits

But as of now, EDC is required to report little publicly about its operations and the benefits of its work to the city and New Yorkers. The City Council bills being passed this week, which are expected to be signed into law by the mayor, seek to increase those reporting requirements to add a layer of accountability and transparency to EDC’s work.

“We spend an extraordinary sum every year on economic development and the goals are laudable: creation of jobs, the expansion of affordable housing or even the refurbishing of important cultural or historical sites,” said City Council Member Daniel Garodnick, chair of the economic development committee and prime sponsor of one of the three bills in the package, in a phone interview. “But, unfortunately it’s not always clear whether these dollars achieve their intended objectives.”

Garodnick’s bill would require the EDC to provide fiscal impact statements for projects it sponsors, including estimates of the number of jobs being created. Another bill, sponsored by Council Member Corey Johnson, would require EDC to report on its efforts to recover funds from any third party that received financial assistance but failed to live up to an economic development agreement. The third bill, sponsored by Council Member Helen Rosenthal, would give the City Council an opportunity to comment on proposed economic development agreements by mandating that EDC provide project descriptions and budgets to the Council at least 30 days before the agreement is finalized.

The three bills build on Garodnick’s efforts that he began in 2014 to improve oversight of EDC and how it utilizes taxpayer money. Last year, Garodnick and Council Member Julissa Ferreras-Copeland, the Council’s finance chair, led a task force to examine the city’s economic development tax expenditures. The task force issued 10 recommendations including instituting regular reviews of tax expenditures and improved oversight. The three bills being passed on Wednesday were an outcome of those recommendations.

“Through these bills, EDC will provide comprehensive fiscal impact statements and enhanced compliance reports for projects that receive our financial assistance,” said Shavone Williams, an EDC spokesperson, in a statement. “We look forward to this collaboration with the City Council as part of our larger efforts to remain as transparent as possible to the communities we serve.”

Support from EDC indicates the mayor will sign into laws the bills, which have passed through Garodnick’s committee and will be voted on by the full City Council on Tuesday.

Garodnick did acknowledge that EDC has improved its processes and that it already provides some information annually on its projects as required under city and state law. EDC puts out an Annual Investments Projects Report, in three volumes, on projects that receive financial assistance and details of the sales and leases of city-land. The last report, issued January 30, notes that EDC provided some form of financial assistance to 554 projects in fiscal year 2016. The report included information on 46 sales of city-land that brought in $536.1 million and 89 leases of city-owned land with rents worth $126.1 million.

“I felt that more could be done to ensure that the public has a handle on how we are spending our money here and we want to give the public better access to this information,” said Garodnick, who is leaving the Council at the end of the year due to term limits. “We want to go further and be able to measure the upfront goals with the outcomes.”

Indeed, in the context of numerous neighborhood rezonings proposed by the de Blasio administration across the city, advocacy groups have consistently called for more rigorous scrutiny of promises made by the city and keeping developers accountable if they receive any benefits from the administration. This also applies to singular projects, including the prominent example of the Bedford Union Armory redevelopment, a process that was spearheaded by EDC. The project is on city land but proposes a long-term lease to a private developer, raising concerns among community advocates.

“There is a natural tension here between the need to activate economic development measures and local community perspectives,” Garodnick said, when Gotham Gazette ventured whether increased oversight was necessary in the aftermath of the Bloomberg years, when development went largely unchecked. “And part of this is ensuring that local needs are considered and that’s really what the Rosenthal bill is about. This is a very important agency that spends an extraordinary amount of money which does a lot of good work. We want to add these oversight measures to ensure the greatest transparency of taxpayer dollars.”

Garodnick also agreed that there’s a need to ensure that the mayor’s plan to invest in burgeoning economic sectors to directly create 100,000 jobs receives the appropriate scrutiny. “This would always be important but with the commitment that is being made to find ways to create economic opportunities, this is even more important,” he said.