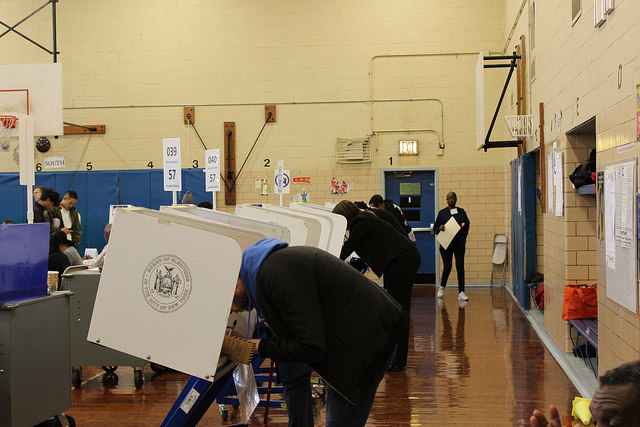 Mayor Bill de Blasio won reelection on Tuesday, earning about two-thirds of the vote in another low-turnout election -- about 1,070,000 voters cast ballots in the mayoral race. De Blasio's fellow incumbent citywide Democrats, Comptroller Scott Stringer and Public Advocate Letitia James, also won reelection, each with about three-quarters of the vote.

Among the most notable other votes cast in New York this Election Day, the constitutional convention ballot question -- proposal one on the back of the ballot -- was resoundly defeated, with more than 83% voting "no" statewide. Proposition two, which would allow the stripping of pensions from elected officials convicted of corruption, passed, and proposition three, allowing some opening up of preserved upstate land for important infrastructure projects, also passed. All three were statewide referendums, as voters went to the polls across New York, including in some interesting mayoral and county executive contests.

In New York City, though, de Blasio defeated six other candidates on the ballot, receiving about 66% of the vote, with Republican Nicole Malliotakis coming in second, earning about 28% of the vote. The other candidates -- Sal Albanese (Reform), Akeem Browder (Green), Mike Tolkin (Smart Cities), Bo Dietl (Dump the Mayor), and Aaron Commey (Libertarian) -- all finished at 2% or lower. Dietl, who raised and spent over $1 million and was included in both televised debates, got just 1% of the vote.

James' Republican opponent, J.C. Polanco, came in second in the public advocate race with about 16% of the vote. Michael O'Reilly, the Conservative Party nominee, got about 8%; Green Party nominee James Lane about 2%; and Libertarian Devin Balkind under 1%.

All five borough presidents were easily reelected with at least 75% of the vote: Gale Brewer in Manhattan; Ruben Diaz, Jr. in the Bronx; Eric Adams in Brooklyn; Melinda Katz in Queens -- all Democrats -- and James Oddo, a Republican, on Staten Island.

The following City Council results came in on Election Day -- it is worth noting that Council District 30, in Queens, appears headed to a recount after, in a bit of a surprise, incumbent Democrat City Council Member Elizabeth Crowley appers on the verge of losing to Robert Holden, who had lost the Democratic primary to Crowley but ran in the general on several ballot lines, including Republican.

Council District 1: Margaret Chin, a Democrat, will win with about 50% of the vote, with Christopher Marte coming in second with about 37%. This, after Marte lost the Democratic primary to Chin by just over 200 votes.

CD13: Mark Gjonaj, Democrat, elected with 49% of the vote; Republican John Cerini received 36%; and Working Families Party nominee Marjorie Velazquez, who did not campaign in the general, received 13%

CD43: Justin Brannan, Democrat, elected with about 51% of the vote; Republican John Quaglione received about 47%

CD44: Kalman Yeger, Democrat, elected, with 67% of the vote; Yoni Hikind, running on the Our Community line, received about 29%