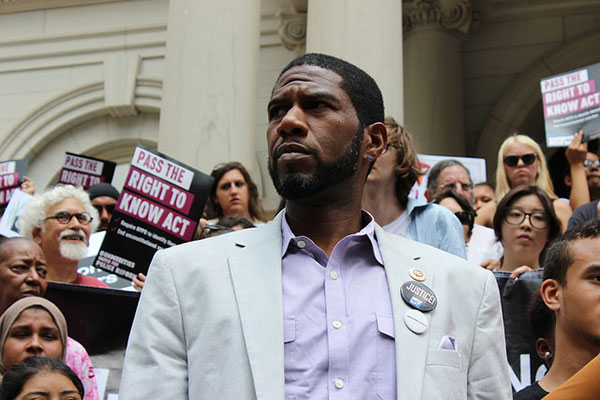 In less than two months, the current class of the New York City Council ends its term, and eight incumbents who won reelection on Tuesday are running to lead the 51-member legislative body as its next speaker. It is an internal race influenced by county party affiliates, labor unions, Mayor Bill de Blasio, himself newly reelected, and others.

As the clock ticks on this term and the speakership of Melissa Mark-Viverito, a de Blasio ally who is term-limited out of office, a particular package of controversial legislation offers an especially delicate situation for Mark-Viverito, de Blasio, and the speaker candidates, most notably the one, Ritchie Torres, who is a prime sponsor of the bills.

Each of the eight speaker candidates -- Council Members Torres, Corey Johnson, Mark Levine, Donovan Richards, Jimmy Van Bramer, Robert Cornegy, Ydanis Rodriguez and Jumaane Williams -- is a co-sponsor on the two police reform bills, collectively called the Right to Know Act, which puts them at odds with the mayor, who has ardently opposed the legislation, and with Mark-Viverito, who has refused to allow it to come to a vote. Instead, Mark-Viverito and the NYPD announced an agreement on administrative changes whereby the police department agreed to implement pieces of the bills, but without the power of law.

As the Council readies for an expected end-of-term legislative blitz, supporters of the bills from inside and outside the Council are pushing for passage, potentially setting up the next speaker, the second-most powerful elected official in the city, to take office having already courted conflict with the mayor and potentially establishing a new dynamic between the heads of the executive and legislative branches of city government. It puts Torres in a particularly awkward position of having to possibly decide whether to buck advocates and co-sponsors or the mayor and the speaker and those members who would rather not have to vote on the measure.

De Blasio has yet to use a veto during his four years as mayor, with virtually every contentious piece of legislation either being negotiated to agreement between the mayor and the Council or scuttled.

The bills in question include Intro. 182, sponsored by Council Member Torres, putting him in unique position among the speaker candidates, which requires police officers to identify themselves during a street stop, and Intro. 541, sponsored by Council Member Antonio Reynoso, mandating that officers inform individuals of their right to refuse consent to a search in cases that it is required and to provide audio or written proof if an individual consents to a search. Unsurprisingly, the legislation was met with strong resistance from the NYPD, whose leadership has often been critical of the City Council’s attempts to legislate its practices and believes the bills would hamper officers’ abilities to do their jobs.

In July last year, Mark-Viverito struck a compromise with the police department to implement certain provisions of the bills, foregoing a vote, despite the fact that the bills had and continue to have support from a majority of the Council. Police reform advocates were incensed by what they saw as a backroom deal and questioned the speaker’s willingness to stand up to de Blasio.

Six of the eight speaker candidates -- Johnson and Cornegy did not respond to requests for comment for this article -- said the speaker’s race would not affect their support for the Right to Know Act and that the legislation would likely not affect the speaker’s race. But they also agreed that any speaker must demonstrate their independence from the mayor, and supporting these police reforms can do just that.

“I can assure you that the speaker’s race has no bearing on how I will conduct myself on the subject of the Right to Know,” said Torres, in a phone interview. “One has nothing to do with the other.” Torres and Reynoso have held off on using a discharge through committee, a procedural tool that would allow them to bypass a committee vote and bring their bills directly to the floor of the Council, despite the urging of police reform advocacy groups such as Communities United for Police Reform (CPR).

“I never shy away from challenging authority but for me it’s more about finding the right solution,” Torres said, insisting that he would rather negotiate with the police department to amend the bills and get them passed. “There’s greater value in passing legislation with the buy-in of an agency than doing so in the face of hysterical opposition. In the end, if one side refuses to negotiate in good faith, then of course I reserve the right to discharge and I have no hesitation about exercising that right. But I will do so only when necessary.”

When asked if, in the context of Right to Know, Speaker Mark-Viverito had been sufficiently independent of the mayor and whether the next speaker should be more independent, Torres bluntly said, “‘No’ to your first question and ‘yes’ to your second question.”

The other speaker candidates, even as they stood for the virtues of the Right to Know Act, did not criticize Mark-Viverito, who has been noncommittal on whether the two bills are moving closer to a vote. She has insisted that the Council is continuing internal conversations with the bill sponsors and the NYPD, and that the body has been assessing the implementation of the administrative changes agreed to last year. “We have been in dialogue, very recent dialogue with advocates, with the police department, with the sponsors of the bill,” she said at a recent news conference. “There’s been a lot of conversation, so we’re still going through our process.”

Asked if she’d encourage Torres and Reynoso to exercise their prerogative to discharge the bills, she simply said, “We’re going through the process with those bills.”

When asked repeatedly at that press conference what specifically she and the Council were doing to monitor the administrative implementation, Mark-Viverito gave vague answers about ongoing conversations.

Politico New York reported last week that supporters of the bills are hoping to bring them to a vote by November 16, since a vote after that would leave insufficient time to override a veto by the mayor. Police reform groups have also called on the bill sponsors, Torres and Reynoso, to ensure passage or discharge the bills through committee by that deadline.

“Our primary concern with the [next] speaker is really making sure that they’re going to be a person who supports these reforms and future reforms and make sure that New Yorkers are having interactions with police that make sense and don’t violate their rights,” said Anthonine Pierre, deputy director of the Brooklyn Movement Center, a nonprofit that is a member of the Communities United for Police Reform coalition. Advocates have been supportive of Torres and Reynoso, but appear to be reaching a point of frustration.

As was the case with police reform advocates, many on the Council were disappointed by the speaker’s decision to strike a bargain with the NYPD in lieu of a legislative solution. But, besides Torres, most other speaker candidates defended Mark-Viverito’s record of being independent, while yet others spoke of how they would handle the speakership themselves.

Council Member Levine believes the bills will hardly play a role in the speaker race as he expects they’ll be resolved before the end of the year. “I believe that there will be a way for the bills to move forward with buy-in from the people that will be implementing it, the [police department], and that that will be settled before we have a new speaker,” he said in a phone interview.

He defended Mark-Viverito’s leadership over the process involving the Right to Know. “I think she should be given credit for working very very hard on this issue, both on the policy and legislative front,” Levine said.

He emphasized that the Council has been independent of the mayor, pushing him on issues such as funding for 1,300 new police officers and free legal assistance in housing court, which he championed. And he noted that the speaker will be chosen only by the 51 members of the Council. “It’s just so important that the Council emerge as a totally independent body, a co-equal branch of government, and that’s definitely my vision for the speakership,” he said.

Council Member Rodriguez hopes to see movement on the bills but would only comment on “who I would be as speaker,” briefly mentioning that he would expand the oversight role of committee chairs. “The speaker should be a person that defends the independent voice of the Council,” he said.

Council Member Van Bramer said the speaker race “is an opportunity to elevate the conversation” around Right to Know, which he said should pass on its merits regardless of the race. He said he would move the bills to a vote, given he is elected speaker, if they do not pass this year. “I think that it’s really important that the speaker be a counter-balance to the mayor,” he said. “I think the body is looking for an independent and forceful speaker who’s gonna be able to represent the members and represent the interests of the members and I think I’ve demonstrated in the past that while we certainly work together, when I disagree with the mayor, I’m not afraid to disagree with the mayor and disagree strongly.”

Council Member Williams spoke briefly with Gotham Gazette at City Hall and only said that he was following the lead of the Right to Know sponsors. “I continue to support it, I hope it gets passed,” he said.

He also stressed that Right to Know has not languished because of a lack of independence either by the speaker or the Council. “I think it’s a question of trying to shape and get something done. And the Council has the ability to pass legislation whether the mayor supports it or not, but we also want to make sure that we’re doing it in a responsible fashion and we’re trying to reach a medium that is doable,” Richards said, “to make sure that, one, our community is getting the greatest benefit of transparency, but secondly also in a way that ensures that we’re not also going to harm officers’ ability to do their job as well.”

Council Member Rory Lancman, a vocal critic of the de Blasio administration on criminal justice issues, is also a co-sponsor of the Right to Know Act which, he said, “is a good lens through which to evaluate the speaker candidates,” and their ability to stand up to the mayor.

“The issue of are you for or against the Right to Know Act isn’t a factor in the speaker’s race because everybody’s for it,” he said. “What is an issue is whether or not you as a speaker will allow bills that make you or the administration uncomfortable come to the floor for a vote. That is an important test of the speaker candidates and I think it is the main issue that each speaker candidate has to address because philosophically, ideologically, substantively there’s not much of a difference among the eight of them in terms of what they stand for.”