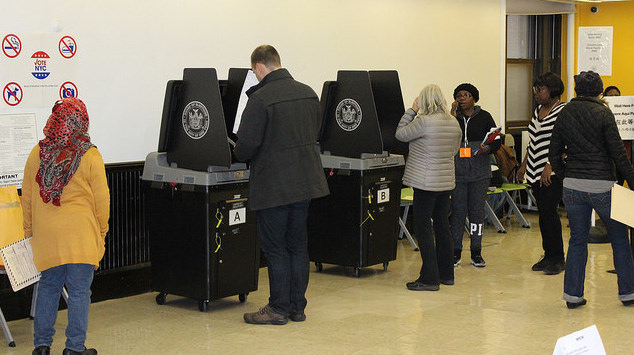 As New York State’s archaic election and voting laws continue to dampen voter turnout, the New York City Council is about to take a step to encourage participation. The City Council’s governmental operations committee will vote on Tuesday, November 14 to approve a bill allowing online voter registration for city residents, Council Member Ben Kallos, chair of the committee, told Gotham Gazette on Thursday. The bill is then expected to pass the full City Council on Thursday.

“With the historic low in turnout on Tuesday, online voter registration will be an essential tool to help more residents become voters,” Kallos said in a phone interview, referring to the 22 percent of registered voters who showed up to the polls to vote for mayor. Following the committee vote, the bill will head to the Council floor for a vote at its next stated meeting, he said.

New York’s laws lag behind most other states and voter turnout has been consistently low in recent elections at the federal, state and city level. Nationally, 34 states and Washington D.C. allow some form of online voter registration. Although New Yorkers can submit registration forms online through the Department of Motor Vehicles, only those with DMV-issued identification can do so. “Many people in urban areas, which have higher concentrations of low-income communities of color, may not have drivers licenses because they rely on public transportation,” Kallos said.

Kallos’ bill requires that the New York City Campaign Finance Board, or another agency designated by the mayor, create a website and mobile application where residents can register to vote or update their registration. The agency will have to submit those registration forms to the Board of Elections within two weeks, and the portal will inform applicants when their registration will go into effect. The online form will allow applicants to either upload files with a copy of their handwritten signature, a photo for instance, or directly sign the form using a touchscreen.

“I think it’s long overdue and it’s good to see the City of New York join the 20th century,” Kallos said, hinting that the state’s voting laws require broader modernization. While online registration would make registering easier, to significantly improve turnout -- millions of registered New Yorkers do not vote in local elections -- many point to state-level reforms, such as early voting and same-day registration, which have stalled in Albany, curbed by the Republican-controlled state Senate.

“Anything that can be done to improve New York’s appalling voter participation rate is worth doing,” said Blair Horner, executive director of the New York Public Interest Research Group, a nonprofit that advocates for better election laws. “We live in the 21st century. We shouldn’t have VHS technology in the Netflix age and this makes perfect sense to do what can be done to make it easier for people to register to vote.”

Kallos, a Democrat who represents the Upper East Side, credited Attorney General Eric Schneiderman for paving the way for online registration through an informal opinion he issued in April last year. Schneiderman, who was responding to Suffolk County officials seeking clarity on voter registration requirements, wrote that a registration form completed with an “electronically-affixed handwritten signature” would be consistent with state law.

Although the bill would take effect 18 months after it is signed into law, Kallos urged the de Blasio administration to move quickly. As a demonstration of the ease with which a portal can be created, he built his own fully-functional microsite, which he said took only a few hours. “I hope the city doesn’t wait years or months but gets it done in weeks, days or even hours,” he said, also hoping that every city agency integrates links to the portal in online forms, which isn’t mandated in the legislation.

“The Administration worked closely with the City Council in crafting this legislation,” said mayoral spokesperson Seth Stein, in an email. “We support online registration and making voting more accessible to New Yorkers. We look forward to reviewing the final legislation when it passes the Council.”

Kallos is also hoping that the city’s bill will “convince our colleagues in Albany to bring online voter registration to the state.” The New York State Legislature has been consistently averse to electoral and voting reforms. “Elected officials get elected by the voters that exist, not by the voters who might exist,” said NYPIRG’s Horner. “So there’s a natural reluctance to bring new voters into the system.”