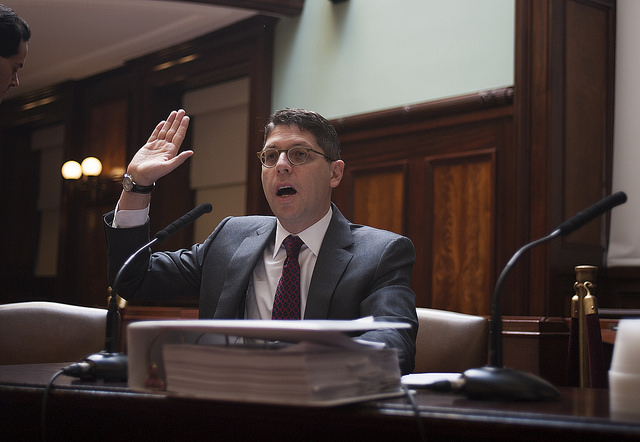 Four years ago, over the veto of then-Mayor Michael Bloomberg, the City Council passed the Community Safety Act, a landmark piece of legislation relating to policing in New York City. One of the law’s most prominent planks was the creation of the NYPD Inspector General, an independent police department watchdog that would audit NYPD practices and operations and make recommendations on improvements.

With the nation on edge over widely disseminated videos of black men being shot by officers and reform activists continuously criticizing the NYPD’s broken windows policing model and the use of stop-and-frisk as racist, the Community Safety Act aimed to increase the department’s accountability to the public and increase the public’s confidence in the department. In 2014, after Mayor Bill de Blasio took office, the city’s Department of Investigation (DOI) appointed Philip Eure, the former head of Washington D.C.’s Office of Police Complaints, to be the first NYPD Inspector General.

On Wednesday, the City Council’s Committees on Public Safety and Oversight and Investigations held a joint oversight hearing to see how, nearly four years down the line, the NYPD Inspector General is accomplishing its stated goals.

The IG’s goals for improving the NYPD were repeated several times throughout the hearing, which saw initial testimony from Eure and his supervisor, DOI Commissioner Mark Peters. Among those doing the questioning were City Council Members Brad Lander and Jumaane Williams, who were the lead sponsors of the Community Safety Act.

“The IG’s mission is to enhance the effectiveness of the police department, increase public safety, protect civil liberties and civil rights, and increase the public’s confidence in the police force, thereby building stronger police-community relations,” Eure said at the hearing. “We believe that we have made important strides towards accomplishing all of these goals in the last four years, and we look forward to continuing to build upon that work in the years to come.”

Since its first publicly released report in January 2015, concerning police chokeholds, the IG has released nine reports on various NYPD practices that have resulted in some significant policy changes, but have also occasionally resulted in no changes. When the IG releases recommendations, the NYPD is pressured but not required to adopt reforms to operations and practices; if the NYPD refuses to take up a reform voluntarily, the City Council can pass legislation to mandate it.

The IG has released reports on NYPD practices such as chokeholds, de-escalation and use of force, quality of life summonses, responding to emotionally disturbed people, body camera use, investigations of political activity, and, most recently, handling of U visa requests for undocumented immigrants who were the victims of a crime.

Although the NYPD has often refused to implement recommended policies, some significant reforms have been voluntarily taken up by the department. For instance, the NYPD's Intelligence Bureau has formalized tracking measures for investigations into political activity, particularly with regard to investigative deadlines that were often ignored by the department's investigators.

However, in a large number of areas, the NYPD has simply ignored the recommendations of the IG, at times displaying open hostility toward the IG’s office. In January, IG’s office released a report showing that the NYPD is not adequately coordinating Crisis Intervention Team (CIT) training for officers, crucial when responding to calls involving an emotionally disturbed person (EDP).

At Wednesday’s hearing, Council Member Lander asked Eure and Peters what could be done to ensure NYPD compliance with recommendations, highlighting the NYPD’s refusal to streamline and improve its coordination of trained officers responding to the scene of calls regarding EDPs.

Peters urged the Council to step up efforts to codify into law certain recommendations that the NYPD refuses to implement.

“The NYPD has accepted far more recommendations than they have not,” Peters said. “And that’s great. And then the job for us, the DOI, is to follow up and to make sure that they’re implementing that.”

Peters later said that instances where the NYPD refuses to comply are the most crucial places that the IG’s office and the Council must partner.

Council Member Williams, who represents the district where an NYPD officer recently shot and killed Dwayne Jeune, an emotionally disturbed man, questioned when a task force would be created to investigate and determine best practices for the NYPD in responding to EDP calls. Four officers responded to the Jeune call; Jeune was killed by the only responding officer who did not receive CIT training.

Mayor Bill de Blasio initially refused to set up a task force after Jeune’s death in July, but relented after prodding from the Council, according to Williams.

Although Eure and Peters had earlier said that they shared reports with the NYPD and City Hall before releasing them to the public in order to glean potentially overlooked facts, Peters said that IG is not involved with the task force.

"I think, obviously, it is an important idea. What I would say, the task force is important, but I believe there are already some things that we know need to be done," Peters said.

The IG’s office will also soon be releasing its first report related to Williams’ recently passed bill, Intro 119, requiring compilation of litigation data against officers and for the IG to use that to develop recommendations. The IG will be releasing the report in April, which Williams said he looks forward to.

Williams proudly proclaimed that things are going well, despite the NYPD and pundits saying that the creation of the NYPD Inspector General would "destroy the city, the sky would literally crack open, and brown and black young people were gonna wreak havoc on this city, and the inspector general in particular was going to confuse all police officers, they would have no idea who to listen to: the inspector general or the commissioner."

Crime has continued to fall while the NYPD has adopted some, but not all, of the reforms proposed by the IG. All 23,000 foot patrol officers are scheduled to do their jobs with body cameras on their person by 2019.

And, according to Eure, the NYPD has issued tighter guidelines on use of force as a result of the Inspector General's reports.

"Approximately eight months after this office published its first report on use of force by NYPD, the department released a set of revised policies that more precisely define the use of force, as well as a more detailed tracking form," Eure said. "All uniformed officers are now required to use a 'Threat, Resistance, or Injury Form" (TRI) whenever they use force or witness another officer using force at the scene." Last year, the City Council passed a law requiring the NYPD to publicly report use of force metrics derived from TRI data, and Eure stated that the IG’s office will soon release a report on the NYPD’s compliance with TRI.

Eure also boasted of a 2016 report that found no increase in felony crime concurrent with a dramatic decrease in enforcement of quality-of-life offenses, better known as broken windows offenses. While the NYPD continues to utilize broken windows policing that data shows disproportionately impacts communities of color, arrests and summonses have continued to drop, as has crime.

After Peters and Eure, advocates and service providers testified, offering some ideas for further scrutiny by the IG. According to testimony from Brooklyn Defender Services’ Debora Silberman, 86% of the almost 61,000 low-level marijuana arrests in New York City were of African-Americans or Latinos, despite whites using marijuana at an approximately equivalent rate.

Silberman also criticized the common NYPD practice of “testilying,” better known as police perjury, and the NYPD IG’s failure to address an apparent culture of officers lying on the stand. Recently, The New York Times reported that a Brooklyn judge warned the city that a court hearing on police perjury was imminent.

“As a public defender, I can assure you that such lying is prevalent and the NYPD has made no recognizable efforts to meaningfully address it,” Silberman said. “Likewise, the imbalance of power in the criminal legal system that pressures defendants to accept plea deals rather than go to trial also enables prosecutors to provide cover for police perjury, or ‘testilying,’ by making offers that defendants all-but-cannot refuse.”

Although the NYPD has decided not to comply with many recommendations, the department has not been outright dismissive of the IG. Peters said that, to date, the Inspector General has not had to issue a subpoena to the NYPD for documents related to an investigation.