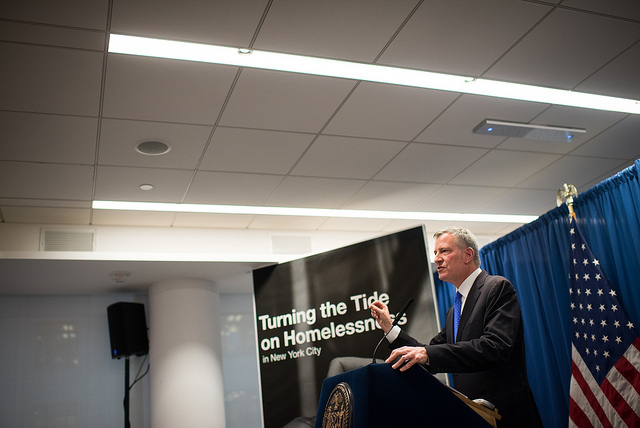 In the effort to fight a steady, decades-long rise in homelessness, the de Blasio administration has significantly increased the city’s rental assistance programs over the past four years. A variety of programs including vouchers for those seeking to reenter stable housing from shelter, the effort also entails paying back rent for those at risk of losing their apartments.

Known as “rent arrears” payments, the de Blasio administration has dedicated hundreds of millions of dollars to keep New Yorkers in their homes and out of the shelter system. While this and other efforts, like significant increases in city-funded legal assistance to tenants facing eviction in housing court, have not reversed the upward trend in the shelter census, combined efforts have kept thousands of families in their homes and led to a break in the trajectory of the homelessness population -- the shelter census has hovered around 60,000 for all of 2017.

The de Blasio administration has estimated that well over 70,000 people would be homeless were it not for its efforts. At the same time, an increase in homelessness under Mayor Bill de Blasio’s watch, leading to multiple shake-ups in the administration’s approach to the issue and personnel in charge, has been one of the biggest areas of criticism for the mayor and one where he has openly admitted an insufficient response.

When de Blasio took office, there were roughly 51,500 people in city shelters, according to numbers the mayor used during a February speech outlining new plans to combat homelessness. During the 12 years of Mayor Michael Bloomberg’s administration, homelessness grew to that number from about 31,000. During Mayor Rudy Giuliani’s eight years in office, the shelter census grew from 24,000 to that 31,000.

While homelessness has grown under de Blasio, this year has shown a fairly sustained pause in that growth, one the administration attributes to its suite of programs and immense resources devoted to both re-housing people experiencing homelessness and keeping at-risk people in their homes. A key piece of the puzzle has been the increase in rent arrears payments.

The final year of the Bloomberg administration, 2013, compared to 2016 under de Blasio, shows rent arrears payments provided to about 25% more households. The average disbursement has gone from $2,695 to $3,668, indicative of the increased cost of housing in the city and the widening gaps between incomes and rents, according to the city. HRA indicated that rent arrears efforts have continued to grow in 2017.

“As part of this Administration’s overall effort to prevent evictions and alleviate homelessness, over the past three years we have rebuilt rental assistance and rehousing programs that had been eliminated in 2011, expanded legal services for tenants and enhanced emergency rent assistance,” said HRA spokesperson Lourdes Centeno, in a statement. “By providing emergency rent assistance, we have helped more than 300,000 New Yorkers remain in their homes while saving taxpayers’ money because rental assistance is much less expensive than the cost of a homeless shelter. Helping New Yorkers at risk of eviction remains a crucial priority for this Administration.”

The mayor has not only increased resources going toward homelessness prevention and reduction, as well as toward simply sheltering those experiencing homelessness (some at pricey hotels and at decrepit shelters), he also signed into law a “right to counsel” bill that will cover the vast majority of low-income tenants facing eviction in housing court, where they often do not have legal representation without the city’s help. While he had been increasing funding toward such legal services, de Blasio only agreed to such a law after intensive lobbying from City Council Members Mark Levine and Vanessa Gibson, the co-sponsors of the bill, and advocates.

Before that, though, de Blasio in February announced his second reboot of the administration’s approach to homelessness, with a focus on opening new shelters to keep people close to their communities, jobs, and support networks, while eliminating the use of costly hotels and substandard “cluster site” shelters.

“I said honestly, since we’ve come in, we’ve had to struggle to deal with a constant flow of people coming in, and that got to our worst point just about the time of Thanksgiving last year,” de Blasio said in February when releasing his new plan, Turning the Tide on Homelessness in New York City. “We reached the peak population that’s ever been in shelter, 60,709. Today, we have just over 60,000 people in shelter. By the end 2021, we will get down 57,500.”

De Blasio has been criticized for proposing to open 90 new shelters and for setting such a modest goal in homelessness reduction, which he admitted was such when he announced it.

According to the latest numbers available from the Department of Homeless Services, there were 60,325 people in homeless shelters on Tuesday of this week. (There are somewhere around another 2,000-4,000 people living on the streets, a population that is challenging to accurately quantify, members of which the de Blasio administration has launched new efforts to bring into shelter.)

In an interview earlier this year, de Blasio’s homelessness czar, Social Services Commissioner Steven Banks, said that while he was impatient to make more progress, “breaking the trajectory itself was a significant achievement. Three-and-a-half years in, there are signs of progress and signs of much more we need to do.”

Banks said that other than more federal and state help, the pieces were all in place to not just break the upward trendline, but put it in reverse. He often cites a “prevention-first strategy,” and listed “more supportive housing, more rental assistance, more outreach on the streets, more help to prevent evictions, more money for rent arrears, a shelter system to keep people close to their networks.” He added, “Reforms that we have wanted for years, now we’re putting them in place.”

Discussing the increase in rent arrears payments on Wednesday, Giselle Routhier, policy director at Coalition for the Homeless, an advocacy group, said that “the scale of the numbers highlights the scale of the need that’s out there. The number of cases and the investment indicate the widespread need across the city, something we should all be concerned about. But it’s good that the city is making these efforts to keep people housed.”

“This highlights one aspect of what the de Blasio administration is doing right -- prevention efforts,” Routhier said. “But when we’re talking about reducing record homelessness in New York City, we have to look at how they are helping people in shelter move into housing.”

Routhier added a word of criticism and previewed a City Council hearing schedule for this coming Monday. “Today he released Housing New York 2.0, in which he’s increasing the target number of units,” she said, “a vast increase in the total housing plan, but there’s no mention of an increase in the number of units for homeless households. For us, that’s a concern given the number of people in homeless shelters.”