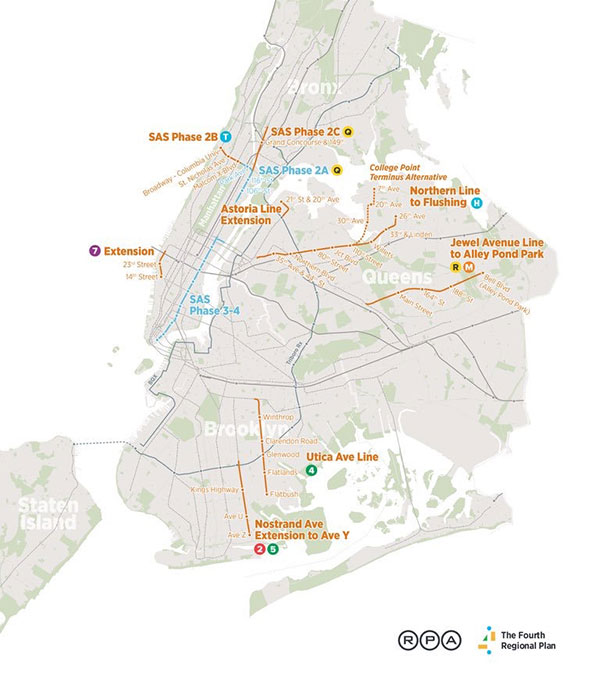 New York, New Jersey and Connecticut must reform their governing institutions, overhaul and integrate their transit networks, fight climate change, and make it less costly to live in the region. Those are the four major thematic prescriptions of the Fourth Regional Plan, a comprehensive vision released on Thursday by the Regional Plan Association (RPA), a prominent urban think tank that has advocated for comprehensive urban development projects in the tri-state region for more than 90 years.

The RPA is a private group composed of urban experts and business leaders who first came together to release a broad holistic plan for the New York metropolitan region in 1929. It has since grown into an influential research and advocacy organization and many of its proposals have informed state and local policy. The latest plan, as with past documents, proposes long-term solutions to major urban issues such as economic growth, mass transit, affordability, and housing.

The new plan is “much more inclusive” than past iterations, said RPA President Tom Wright, at the Thursday release at The New School in Manhattan. The RPA sought input from civic groups, community-based organizations, and thousands of residents from the region, he said, and employed analytical data tools that were unavailable in the past.

“The challenges that we’re talking about with this plan are clearer than they’ve ever been because we’ve been tested,” Wright said, referencing the September 11, 2001 terror attacks, the great recession, and Hurricane Sandy, which he called the “three great shocks” that have affected the region since the last regional plan was released, in the mid-1990s.

At the core of the plan are four guiding principles -- equity, health, prosperity and sustainability -- on the basis of which the plan recommends actions to improve state institutions, fix the region’s transportation infrastructure, tackle the challenges of climate change, and increase household incomes while creating more affordable housing.

“Unless we dramatically increase our infrastructure capacity, housing supply and productive capabilities, economic growth over the next 25 years will be half what it was over the last 25,” Wright warned. “And without this growth, we won’t be able to raise our living standards, expand opportunities or pay for the investments that we need.” He predicted that the plan’s recommendations would double predicted job growth from 850,000 jobs to nearly 2 million jobs by 2040, and that it would end homelessness and sharply reduce inequality along racial, ethnic and gender lines.

Many of the recommendations would require broad cooperation between state and local authorities from the three states. They include creating an integrated regional rail network for the three states and modernizing major transit hubs and airports in the region.

Building on commitments already in place in the three states to reduce carbon emissions by 80 percent by 2050, the plan recommends that the region follow California’s lead to expand their carbon pricing efforts to transportation, residential, commercial, and industrial sectors. Those efforts could generate $3 billion in revenue a year combined, the plan estimates.

The RPA also proposes a more proactive approach to coastal resiliency instead of one dependent on federal aid to respond in the wake of climate disasters. It imagines a Regional Coastal Commission of the three states which would take a “long-range, multi-jurisdictional, and strategic approach” to resilience and sustainability. It also puts forward the idea of a Tri-State Energy Policy Task Force, to focus on sources of sustainable energy to create a greener electrical grid.

Many of the recommendations deal with New York City’s own public transit and traffic crises. The plan supports a congestion pricing strategy and changes to highway tolling to reduce traffic. It also addresses the specific problems of the MTA, calling on New York Governor Andrew Cuomo to create a Subway Reconstruction Public Benefit Corporation to renovate stations, reduce overcrowding, repair the signal system and improve accessibility for people with disabilities. One of the apparently less popular proposals involves shutting down more weeknight service on the subway system to create longer windows for subway repairs. An apparently more popular aspect includes several subway line extensions.

Addressing the audience, First Deputy Mayor Anthony Shorris, who is set to leave the de Blasio administration in January, praised the plan and RPA’s focus on long-term outcomes across political jurisdictions. “You have to challenge us, you have to challenge the conventional wisdom,” he said of the plan, expecting that one government or the other, even de Blasio’s, would find fault with parts of the proposal.

But he said it was invaluable in thinking of the prosperity of the larger region with which New York City’s future is inextricably linked. “We rise and fall together,” he said, “and it’s time we recognize that.”