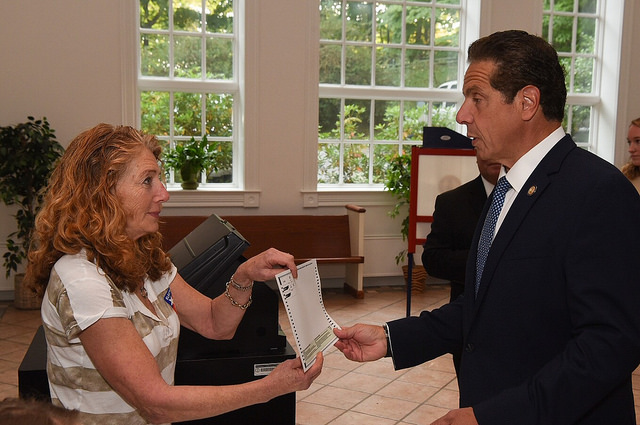 Last month, the New York City Council passed a bill that provides for online voter registration for city residents without requiring DMV-issued identification. With guidance from Attorney General Eric Schneiderman’s office allowing local jurisdictions to pass online registration measures, the bill holds up under state law. But state elections officials can’t agree on the validity of the bill, and city Board of Elections officials have yet to make a decision, portending that the matter may have to eventually be decided in court.

The uncertainty is unfolding as Mayor Bill de Blasio is expected to soon sign into law the city bill, Intro. 508, the lead sponsor of which was City Council Member Ben Kallos. The question at hand is whether the city and state Boards of Elections will accept online signatures as valid in registering to vote. As of November 1, per state BOE numbers, there are more than five million registered voters in New York City, but an estimated 700,000-plus eligible voters who are not registered, with more turning 18 years of age each year.

Currently, the only agency authorized to accept online registration forms is the Department of Motor Vehicles, but only for people who already have DMV identification. The city bill would allow the New York City Campaign Finance Board to perform that role as well and would allow voters to submit electronic signatures matching their “wet” ink signature on paper. It would ease the process of registration for hundreds of thousands of New Yorkers, many from low-income communities of color who may lack DMV identification since they depend on public transportation.

Following the bill’s passage, the New York City Board of Elections sought guidance from its parent body, the State BOE. But the Democratic and Republican state BOE commissioners reached a split verdict. In separate memoranda sent to the city Board earlier this week, the Democrats approved of the bill while the Republican commissioners questioned its validity.

In a memorandum to the city BOE dated December 11, Todd Valentine, the Republican co-executive director of the state BOE, argued that the Council’s bill “would contravene New York State Constitution, state statutes and the rulings by the New York State Court of Appeals.”

He cited a 1985 decision in Clark v Cuomo by the New York State Court of Appeals, which effectively prohibits any state or city agency that has not been specifically authorized under state law to distribute and collect voter registration forms. He also argued against acceptance of electronic signatures, insisting that they do not meet the standards for an affidavit under the Electronic Signatures and Records Act, though he did say the ESRA’s application is voluntary for agencies. (A voter registration form effectively functions as an affidavit and registrants can be held criminally liable for falsifying their information.)

Valentine particularly noted that authorizing the city’s municipal identification program, IDNYC, as a signature repository “raises numerous issue in its own account.” “Specific research would need to be done to ensure that this program and any other so referenced, actually has strict safeguards and identification requirements to ensure that those applying for identification are, in fact, the individuals themselves,” he wrote.

The state BOE Democratic co-executive director, Robert Brehm, wrote to the city BOE one day after Valentine. He included a memorandum prepared by co-counsel Brian Quail which read, in part, that the legislation “is consistent with state law, and the voter registration forms produced under its provisions should be processed in the normal course by boards of elections.”

The memo pointed to A.G. Schneiderman’s informal opinion issued to Suffolk County officials in April last year when they were considering implementing a similar system locally. “Indeed, such electronically-facilitated voter registration is, in our opinion, consistent with the expressed legislative policy of ‘encourag[ing] the broadest possible voter participation in elections,’” Schneiderman wrote at the time.

Quail cited the opinion heavily in his memorandum. “Int. 508-A is little more than the cyber equivalent of requiring an agency of the government to provide pen and paper to persons wishing to complete a voter registration form. The legislation is crafted to comport with the parameters thoughtfully outlined in the Attorney General’s Opinion on the subject.”

The bill provides “sufficient authority” to the Campaign Finance Board, he continued, to implement the law in a way to avoid conflicting with election law, including choosing how signatures can be submitted. “As caselaw evinces, the law defining signature has never been rigid, and Int. 508-A is precisely the type of practical extension of the law of signatures to new realities that changing modes of writing require,” he wrote.

On the sidelines of a City Council oversight hearing on Wednesday, Douglas Kellner, Democratic co-chair of the state BOE, told Gotham Gazette that Schneiderman’s opinion “doesn’t seem to affect the Republicans.”

“On that particular issue, the state Board of Elections really has no role, and ultimately the courts will have to decide,” he predicted. “Someone will register through that system and if the registration is not processed, that person could bring a lawsuit or if the registration is processed, someone who wants to challenge it could bring a lawsuit.”

Kellner said the city BOE could decide to accept or reject electronically submitted signatures. The city BOE, as with its state counterpart, is a bipartisan body with ten commissioners, a Democrat and a Republican from each of the five boroughs, nominated through the party establishments. However, if they deadlock on processing such a registration form, under state law it would automatically be accepted.

A frustrated Kellner criticized his Republican colleagues for rejecting such a common sense measure and more broadly for their obstructionist tactics. “So often, people have said there’s not a Republican or Democratic way to pick up the garbage and that election administration is similarly a nonpartisan function,” he said. “But it’s unfortunate that increasingly, there is a partisan divide over election administration. That more and more the Republican Party is imposing obstructions to allowing people to exercise their franchise and in an efficient manner.”

He did say New York Republicans have been more “moderate” and have not pushed the types of voter suppression measures used in many states. “But on the other hand, it’s very disappointing that the New York Republicans have been resisting, so persistently, improvements in election administration that would make it easier for people to register to vote, easier for people to vote.”

The New York City BOE executive director, Michael Ryan, told Gotham Gazette at the same Wednesday hearing that the city commissioners had yet to make a decision. “My expectation is that the commissioners will independently review those documents and give the executive management team of the BOE guidance on the direction that we’re going to go in,” he said. “Until such time as that information has been digested and discussed among the commissioners, we have no public opinion one way or the other.”