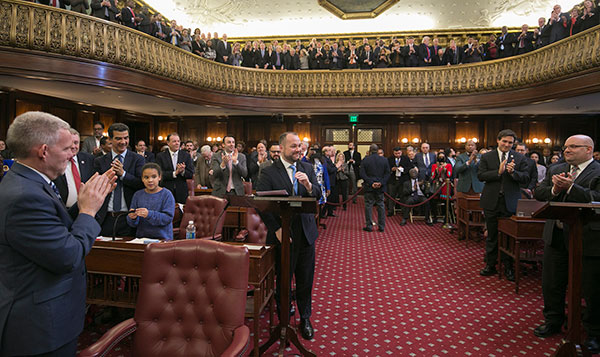 City Council Member Corey Johnson, a Manhattan Democrat, was elected speaker of the New York City Council with near unanimous support on Wednesday, becoming the first leader of the 51-member legislative body who is an openly gay man and openly HIV-positive.

Johnson took the helm at the first charter meeting of the new Council class, after a vote that saw little drama and 48 votes in his favor. Council members, including those who had attempted to run for speaker themselves, took their turns singing Johnson’s praises as prominent elected officials and political influencers from across the five boroughs looked on from the balcony of the Council chambers. Johnson’s mother was there, too, having driven from Massachusetts to see him rise to the Council’s top leadership position.

In an emotional acceptance speech, Johnson spoke about the importance of his mother in his life and some of the tough times they had faced. He spoke fondly of his predecessors and the city’s progress in the last four years under Mayor de Blasio and Speaker Melissa Mark-Viverito. But he warned of challenges of “historic proportions” that lay ahead: an affordability crisis that is pushing out residents of the city, an “overflowing” shelter system with thousands of homeless families, struggling mom and pop businesses, a mass transit crisis owing from years of government neglect, continued racial disparities across the city, and potential funding cuts from the state and federal governments. “These problems are incredibly complex and entrenched,” he said. “But the future of our city depends on our ability to confront them. And confront them we will.”

In alluding to the many thorny issues that plagued the first term of the de Blasio administration, he promised to tackle them with increased independence from the mayor. “There has never been a more important time to ensure that our city has a strong, unified and independent Council to take on these challenges,” he said, with an emphasis on the word independent. He pledged unending support to his 50 constituents and promised to lead by consensus.

Johnson emerged at the top of a crowded field of candidates who had sought the speakership but all of whom dropped out of the race and conceded to Johnson in the days leading up to the vote, after it emerged that he had the support of the Queens and Bronx Democratic county organizations, led by Congressional Rep. Joe Crowley and Assembly Member Marcos Crespo, respectively. But, in a city where people of color make a majority and that is already led by a white male mayor, there was some criticism around Johnson’s selection to what is considered the second-most powerful position in city government.

Numerous Council members representing the Black, Asian and Latino Caucus had insisted that the next speaker should be a person of color. That included Council Member Inez Barron, who attempted a last-minute protest candidacy and voted for herself on Wednesday. “It’s time for a paradigm shift and that’s what I’m here to call for,” Barron had said at a news conference on the steps of City Hall shortly before the vote. “We’ve gotta put an end to the system that has deals that arrange for the speaker to be selected on behalf of what it is that county bosses and district leaders and other powerful players and other rich developers want to see happen here.” Her husband, Assembly Member (and former Council Member) Charles Barron, said, “The process is fraudulent, the process is racist, and the process is corrupt and its been that way for a long time.”

Another speaker candidate, Council Member Jumaane Williams, who only conceded the race Wednesday morning, opted for skipping the vote entirely and instead attended Governor Andrew Cuomo’s State of the State address in Albany, which was scheduled for around the same time (Williams is toying with a bid for governor or lieutenant governor, saying that Cuomo is not a true progressive). Williams had held out longer than most of the other speaker candidates, saying that the next speaker should be a person of color.

In a Wednesday statement, Williams criticized the lack of diversity in leadership positions in city government even as he looked forward to working with Johnson. “Equity must be an issue of highest priority to the next Speaker of the City Council,” he said. “Having spoken at length with Council Member Johnson, he is acutely aware of those concerns, and has agreed, in a tangible and accountable way, to work alongside me on issues of equity, both in government and citywide, for people of diverse backgrounds across race, gender, sexual orientation, and more.”

Williams and Council Member Debi Rose were the only two absences on Wednesday, meaning Johnson received 48 of the 49 votes cast. In his first remarks from the speaker’s podium on the Council chambers floor, Johnson also nominated members and a chair of the rules committee, which will help establish the new Council’s rules and the chairs and members of the other 40-plus issue committees. Johnson named Council Member Rory Lancman to chair the committee, and the speaker himself will be a member of it, as is customary. Johnson is one of 33 members who had signed on to a draft package of rules reforms that are expected to move ahead in some form.

The newly elected speaker has not expressed any particular legislative priorities yet, though he has had a focus on public health as a Council member who chaired the health committee. He’s focused more of his public comments on bolstering the Council and how he would lead the body. He again said on Wednesday that he wants to add to the Council’s land use staff, recreate an investigations division, and offer Council members the opportunity to pursue their interests and priorities.

Speaking with members of the media during a brief press conference after the formal proceedings, Johnson said he will seek a diverse staff, and said that Council Chief of Staff Ramon Martinez has been asked to stay on. He also said that he will look to female members and members of color to speak and lead on issues that he may not have direct experience with. Johnson said he will be talking with each member to see which committees they are interested in chairing or joining and would do his best to make as much of it work as possible. He is sure to also be guided by Crowley and Crespo, as well as other political heavyweights that helped him win the post, like the leaders of the hotel workers union and the firefighters union.

And though many expect him to adopt a more top-down style of leadership than Mark-Viverito, he has insisted that he will sit down with individual members to gauge the needs of their district while formulating a larger agenda for the Council. On the Council floor, he named each member individually, telling them, “I want you to know that in good times and in bad, through thick and thin, I will always have your back. Those of you who supported me, those who didn’t support me, those who ran for speaker and those who have been here in this body and those who are new, I will have your back.”