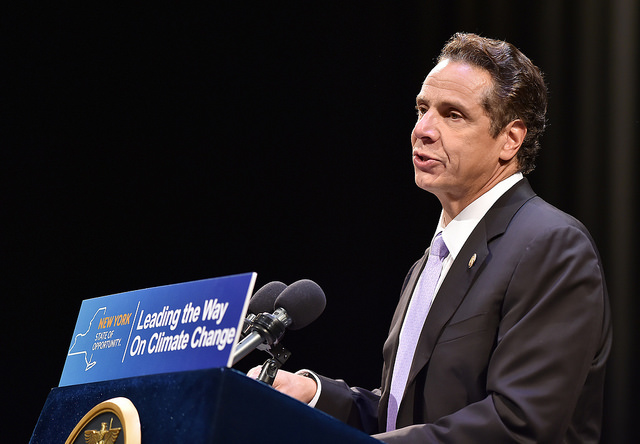 A task force convened by Governor Andrew Cuomo last year to study plastic bag use by New York consumers, and to propose solutions to reduce their usage, released its report on Saturday, and New York City officials are again disappointed in Cuomo on the subject, to say the least.

It’s been just about a year since the governor signed state legislation invalidating a New York City law to impose a nickel fee on single-use plastic and paper bags. In overriding the city’s legislation, Cuomo called the plan flawed, but acknowledged the problem of plastic bag waste, and announced a task force that would propose actionable ideas once it concluded its work.

“The costly and negative impact of plastic bags on New York’s natural resources is a statewide issue that demands a statewide solution,” Cuomo said at the time, promising that the committee of environment advocates, industry representatives, and elected officials would “bring the experience and knowledge necessary to tackle this problem and safeguard New York’s environment for future generations.”

What came of it, however, was the pros and cons of eight options that the state could pursue, including the continuation or strengthening of existing policies, an outright ban, or a partial ban along with the imposition of new fees. The report did not recommend any one option over the others.

“It’s a cynical cop out,” said City Council Member Brad Lander, one of the architects of the Council’s legislation that passed in 2016 but was preempted by the state Legislature and Cuomo last year before it could go into effect. “The Governor, by his own admission, made this problem his responsibility,” Lander added, noting that the city sends tens of thousands of tons of plastic waste to landfills each month, including nearly a billion plastic bags. “And every one is on the governor’s hands,” he said.

The city bill, co-sponsored by Lander and Council Member Margaret Chin, was a controversial piece of legislation that passed with 28 votes, a slim majority in the 51-member Council. An especially rare level of dissent in a chamber where bills virtually never reach the floor without the votes to pass, 20 Council members voted against the bill, many arguing that it would hurt the pockets of middle-class families and low-income New Yorkers, even though it included carve-outs for people receiving government assistance.

That argument carried the day in Albany, where the Legislature passed legislation preventing municipalities with more than a million residents from passing any new fees on single-use bags. New York City is the only municipality in the state that meets the criteria. A similar 5-cent fee on single-use bags was allowed to stand in neighboring Suffolk County, and went into effect on January 1. (Since localities lack the power to institute a tax on plastic bags, the legislation requires businesses to charge the fee and they get to keep the proceeds, something Cuomo pointed to as problematic.)

Many months later, the governor’s task force seemed to kick the can down the road further, with the report merely restating many facts about plastic bag usage that had already been thoroughly debated by the City Council. “A high school student with internet access could have prepared that report,” Lander said incredulously. “It’s ridiculous. I mean, honestly, what I especially liked is that of the eight recommendations, two of them are ‘do nothing.’”

Cuomo mentioned the plastic bag task force in passing at his budget presentation on Tuesday. The governor’s office did not respond to repeated requests for comment on whether he favored any of the options put forward by the task force or indicate any concrete next steps.

“The New York State Plastic Bag Task Force, and its six independent members, has completed a comprehensive review of options available to address the growing threat of plastic bag waste on the environment,” said Sean Mahar, a spokesperson for the State Department of Environmental Conservation, in an emailed statement. “While the Task Force did not reach a consensus around one specific recommendation, highlighting the complexity of the issue, the administration is currently reviewing the options identified in the report.”

That the task force was a redundant effort seems borne out by one of its own members. Marcia Bystryn, president of the New York League of Conservation Voters, publicly issued a “dissent” of the task force’s final report when it was released.

Bystryn insisted on only two “acceptable recommendations,” which involved either a fee on plastic and paper bags or a ban on plastic bags with an accompanying fee on paper bags. “It is the long-held position of the environmental community that a successful solution must include a fee component on all single-use bags,” she said, adding that improved recycling efforts would be insufficient. “We know from countless examples around the world that when consumers take responsibility for their actions by bringing their own bag or paying a fee to cover their environmental impact, single-use bag consumption drops precipitously. I am disappointed the final report fails to convey this position,” she added.

Neither Mayor Bill de Blasio nor City Council Speaker Corey Johnson had seen the report as of Tuesday afternoon, but both separately called for stronger measures to reduce bag usage.

“I proudly voted in favor of the plastic bag bill,” Johnson said, when asked by Gotham Gazette at a news conference at City Hall. “I was disappointed that our authority was taken away from us.”

“We have to do something about plastic bags. It is a scourge on the environment,” he added.

The mayor, at a separate news conference Tuesday, reiterated his call for a complete ban on plastic bags. “We’ve tried a previous approach and it didn’t find favor in Albany but the question at hand is, we can’t keep putting plastic bags into our environment, so what are we going to do? I think a ban makes a lot of sense,” he told reporters.

But the City Council can effectively do little short of passing yet another bill that can be struck down by the state. “We have to figure out what the next steps are,” said Lander, decrying the “weak” home rule powers in the state that allowed the Legislature to quash the city’s first attempt. “I feel like trying again here would be like Charlie Brown and the football and it just doesn’t make sense.”

Lander believes the best solution is a hybrid of a ban on thin plastic bags and a fee on thicker plastic and paper bags. An absolute ban on thin bags does not work, he said, citing the example of Hawaii and Chicago where retailers simply started handing out thicker bags and consequently increased the amount of solid waste. And he insisted that the onus for a solution now lies entirely with the governor.

“[Governor Cuomo] took this problem on when he vetoed our bill, when he created the commission, when he announced he was taking responsibility for it,” Lander said. “We took a lot of responsibility. We did the hard work here. We were ready to bear the challenge of doing it. We had robust debate in the chamber. Not everybody was on board but we agreed to do it. This is on the governor.”