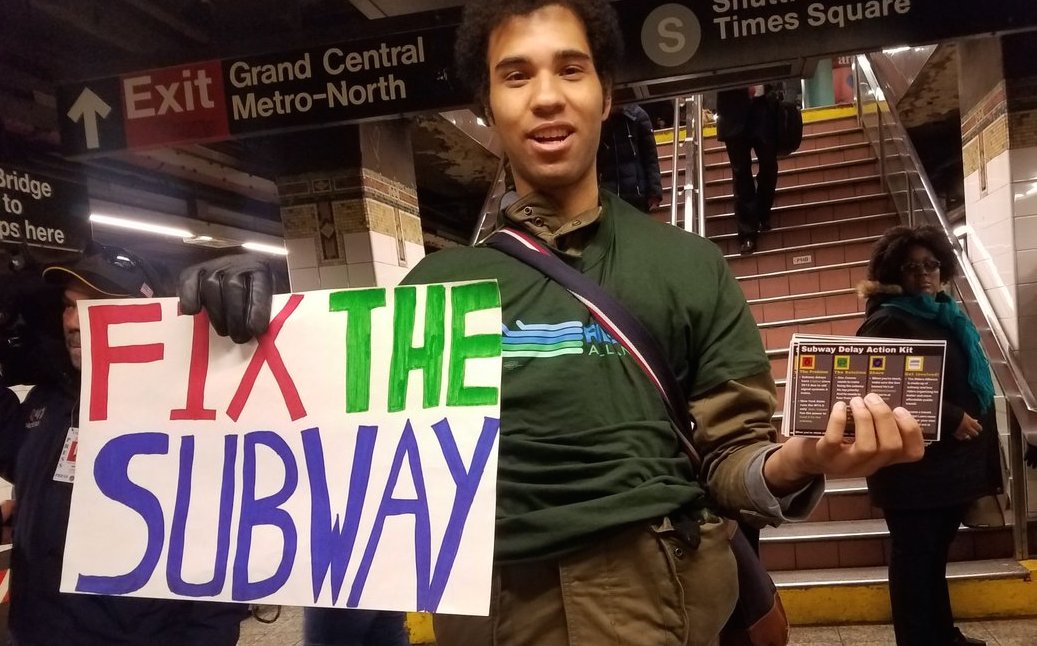 With the “summer of hell” in the past and sustained heat on Governor Andrew Cuomo to fix the long-neglected subway system, one of New York City’s most prominent straphanger advocacy groups will travel to Albany to demand action from Cuomo and the state Legislature.

Riders Alliance members will go to the state capital on Monday, February 12, to rally, garner media attention, and meet with lawmakers, hoping to push Cuomo and the Legislature to pass a new long-term funding mechanism for repairing, maintaining, and improving the New York City subway system. That funding mechanism is encapsulated in the report put forth by the “Fix NYC” panel, put together by Cuomo, which recommended a congestion pricing scheme to reduce the gridlock in Manhattan streets and produce around $1.5 billion annually to help fund the MTA.

The recommendations from the group, published with a three-year phase-in, are now the subject of negotiations between Cuomo, legislators, and other stakeholders and the governor has promised action beyond the MTA’s emergency Subway Action Plan and eyes a deal in the new state budget, due by the April 1 start to next fiscal year.

This past Thursday, Riders Alliance held its first organizing meeting, attended by about 45 people, since the governor unveiled his executive budget in mid-January. Participants discussed organizing tactics, reviewed the Fix NYC plan, and planned for the Albany lobbying day, according to a spokesperson for Riders Alliance, which has continued to gain prominence as the subway crisis has come into greater relief over the past year.

The meeting, which was closed to members of the media, also touched upon members’ stories about the MTA’s poor service and the effect that’s having on their lives, the spokesperson said.

Reema Hijazi, a Riders Alliance member and C-train rider from Clinton Hill, told Gotham Gazette that she was inspired to attend the organizing meeting by a recent incident where she was stuck on a platform for 45 minutes after her train suddenly turned express mid-commute, forcing her to disembark, while she watched five express A trains and a not-in-service C train pass by before a helpful train showed up.

“I spend more time underground than living my life,” Hijazi said. She will be participating in the February 12 lobbying day.

The governor’s budget proposal includes the Subway Action Plan, put forth by MTA Chair Joe Lhota and intended to finance crucial immediate repairs and stabilize the beleaguered system. Cuomo, in his budget, re-committed the $429 million he had previously pledged, a little more than half the $836 million required by the plan. The budget calls on New York City to put up the funds for the rest of the plan, but Mayor Bill de Blasio has been unwilling to do so, saying for months that the city and MTA riders are already putting plenty of money into the MTA, which is not spending the money wisely. De Blasio also regularly cites the $400-plus million that the state has moved from MTA funds toward other transportation projects, saying the state should give that money back to the MTA to pay for the rest of the action plan. The mayor’s recently unveiled preliminary budget proposal does not include any money towards the Subway Action Plan.

Riders Alliance, however, is thinking more long-term. The group is backing the Fix NYC congestion pricing proposal and will be lobbying legislators to support it. The Subway Action Plan is being funded by a mix of capital funds, legal settlement funds, and funds from a transfer of the Payroll Mobility Tax to the MTA. Riders Alliance argues that this kind of funding scheme is unsustainable, no matter the state-city contribution formula.

“The Fix NYC proposal would provide the MTA with the sustainable revenue it would need to fix the subway,” said Rebecca Bailin, Riders Alliance campaign manager. “The Subway Action Plan does not include a long-term plan or funding source necessary to do what is required to end the cycle of delays, overcrowding and meltdowns.”

Bailin said that Cuomo, “who runs the MTA, is the most powerful person in the budget process in Albany,” placing the onus on him to establish a new funding formula for the MTA, which has a capital plan that both the city and state already contribute to and is regularly adjusted, with major expenditures voted on by the MTA board, where the governor has the most appointees and the mayor has a handful. Any solid congestion pricing plan would create a congestion zone in Manhattan that drivers are charged extra to enter. The Fix NYC panel calls for different car and truck tolls, while also adding surcharges for taxis and for-hire vehicles rides through companies like Uber and Lyft.

Riders Alliance supports de Blasio’s “millionaires tax” proposal, which would add a surcharge to high-income New York City earners and put the revenue directly toward the MTA and subsidizing reduced-fair MetroCards for low-income individuals, but takes the position that the Fix NYC plan is the top priority for sustainably funding the MTA. With the governor’s backing, congestion pricing appears to have a much better chance of passing in the state budget. Cuomo has not expressed support for a tax hike on top earners. Both proposals face skepticism in the Republican-controlled state Senate, while the Democrat-controlled Assembly is supportive of the millionaires tax and has not shown a clear majority position on the new congestion pricing recommendations.

The mayor has in part pushed the “millionaires tax” instead of getting on board with congestion pricing because of a concern that congestion charges would amount to a regressive tax on poor outer-borough car commuters, but the Fix NYC panel noted that census data shows only 4 percent of outer-borough residents drive into Manhattan for work. The Community Service Society found similar results.

The Riders Alliance activists -- who have been supported in recent months by several elected officials, including State Senator Michael Gianaris, Assemblymember Bobby Carroll, and City Council Member Brad Lander -- will hold a rally and speak with legislators to win support for enshrining a congestion pricing plan into the state budget. Although they will attempt to win over any legislator they can, they will focus on lobbying New York City legislators, they said. The governor's sustained commitment to congestion pricing remains the group's main objective, however, as they acknowledge the reality of Cuomo’s immense power to push through the policy items he prioritizes.

Lobbying days in Albany, a fairly common occurrence as interest groups seek to influence the government process, often appear to have little effect, but Riders Alliance members are more confident than ever that legislators will listen to them now.