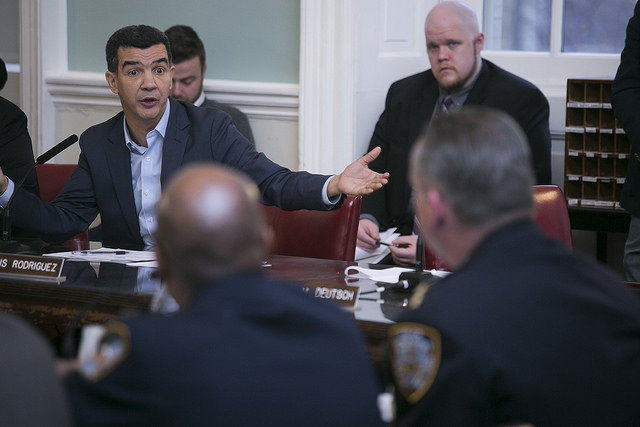 The City Council Committee on Public Safety held an oversight hearing on Wednesday to examine the NYPD’s tactics and procedures regarding protests and crowd control. The perpetually controversial issue has come to the fore once again in the wake of immigrant activist Ravi Ragbir’s detention by U.S. Immigration and Customs Enforcement (ICE) and the NYPD’s subsequent aggressive handling of protesters, culminating in the arrests of two City Council members and 16 others on January 11.

Both Council members who were arrested, Ydanis Rodriguez and Jumaane Williams, Democrats of Manhattan and Brooklyn, respectively, sit on the public safety committee and questioned NYPD officials at Wednesday’s hearing, which was led by committee Chair Donovan Richards, a Queens Democrat.

Williams was released by the NYPD with a desk appearance ticket but Rodriguez was arraigned in court on charges of disorderly conduct, resisting arrest, reckless endangerment, and obstructing emergency medical services. Rodriguez, on the day of the protest, tweeted a picture of what he claimed to be an NYPD officer holding him in a chokehold.

Despite this, the hearing focused less on the allegedly brutal tactics employed by the NYPD in protests and focused more on the department’s alleged coordination with ICE. There was some discussion of the department’s approach to crowd control, though, part of a history that includes the NYPD having been accused of inappropriate suppression or brutal tactics against protesters involved with Black Lives Matter, Occupy Wall Street, antiwar demonstrations, and opposition outside the 2004 Republican National Convention.

But the hearing largely devolved into exasperated quibbles between Council members and NYPD representatives over the basic facts of what happened on January 11, including whether the department was coordinating with ICE it its detainment efforts.

The hearing is the first public safety hearing to be chaired by Richards, who was named to the post by new Council Speaker Corey Johnson, who was part of the January 11 demonstrations but was not arrested. Johnson did have a tense exchange with one officer, who he pursued and reported to NYPD Commissioner James O’Neill for aggressive conduct. Johnson and O’Neill discussed the totality of the day, Johnson said soon after, and the NYPD is continuing its internal investigation of officer conduct.

From the moment it began, the hearing was heated, as Council members and the NYPD officials testifying engaged in several disputes of the facts related to January 11 and to policy areas where Council members deemed the NYPD to be inadequately performing their duties.

It was noted that the NYPD’s Strategic Response Group, a unit of nearly 700 officers that is deployed to maintain crowd control at demonstrations, has under its purview counterterrorism, a combination that worried Council members who feared that empowering officers trained in combating terrorism with monitoring protests would result in overly aggressive policing of the latter.

The department noted that the unit was created, under the direction of former Commissioner Bill Bratton, in response to large-scale terror incidents in places such as Paris and Mumbai. Bratton’s pitch at the time: “Safe from crime, safe from terrorists, safe from disorder.”

When Richards asked if the NYPD views peaceful protesters and terrorists as posing similar threats to public safety and order, the NYPD representatives were evasive, saying that the department required a reserve of officers able to respond to terror incidents, trained in disparate areas of policing like making mass arrests and handling hazardous substances.

Stephen Hughes, Commanding Officer of Patrol Borough Manhattan South, stated that in 2017, SRG had made 322 arrests at 109 demonstrations. The NYPD’s legislative director, Oleg Chernyavsky, stated that those are just arrests made by SRG, and that other patrol units can make arrests that are not counted toward that total.

Several Council members all but accused the NYPD representatives of lying under oath in saying they had not been coordinating with ICE during the January 11 incident. The officers repeatedly asserted that they had not been deputized as immigration officers and were not coordinating in any way with ICE, as per department policy. Williams attempted to refute this narrative by showing a picture of NYPD and federal Department of Homeland Security officers appearing in the immediate vicinity of each other.

“I’m hoping that what happened wasn’t intentional,” Williams said. “And I want to prevent it from happening again.”

Chernyavsky rebutted the notion that being in the same vicinity meant the two agencies were coordinating.

“I think the fact that we were physically present standing next to a federal officer who was outside of, I would assume, his or her place of employment, was an unintentional consequence,” Chernyavsky said. He also asserted that NYPD had become more active in crowd control and making arrests when its task became escorting an ambulance, with Ragbir in it, out of the crowded streets near the downtown federal building where he had had a check-in with immigration officials (there is some dispute about whether Ragbir was actually suffering from any ill feelings and in need of an ambulance). Chernyavsky said NYPD officers were unaware initially that the person in the ambulance was in ICE detention, and claimed that they even went to the wrong hospital at first, a point he thought would bolster the notion that the NYPD was not coordinating with ICE.

“What happened that day was some kind of coordination, period,” Williams said, growing increasingly frustrated with the NYPD reps as Chernyavsky asserted that it’s “irresponsible to allege that we coordinated with immigration enforcement.” They instead repeatedly asserted that they were simply enforcing existing local laws related to protest and crowd control management. They said that the events had unfolded quickly and in chaotic fashion.

The Council members signaled that they had hoped to have a more constructive dialogue about the NYPD’s policies and rules of engagement but were instead having a debate over what the facts were.

Council Member Brad Lander, a Democrat from Brooklyn, also grew increasingly frustrated with the NYPD officials as his line of questioning went on. Lander was incredulous towards the NYPD claim that it was not coordinating with immigration enforcement despite having provided ICE, which was transporting Ragbir, with a police escort from Bellevue Hospital to the Holland Tunnel, which occurred after Ragbir had briefly been at the hospital.

“Up to that point, you guys were responding to a protest,” Lander said, referring to the NYPD’s insistence that they were enforcing local laws. “But at Bellevue, there was no protest.” He also noted that there was no health risk for Ragbir at that point, a justification for Ragbir’s transport by ambulance with ICE on scene. The officers contended that they were not escorting ICE, but rather were simply “present at transport” due to the potential presence of protesters, who ended up not following the ambulance Bellevue or federal officials to the Holland Tunnel. Lander contended that there was no difference between the two.

“I’m more concerned walking out of this hearing than I was walking into it,” Lander said before being interrupted several times. Lander chastised the department for failing to own up to its role in Ragbir’s detention, and for not being apologetic and acknowledging the mishaps.

Local Law 228, which forbids city law enforcement officials from cooperating with ICE by being deputized as federal immigration officers, and requires the NYPD to report the number of federal detainer requests it receives, recently went into effect. An NYPD rep noted that the department did not comply with a single detainer request from ICE out of the 1,526 it received in 2017, as President Donald Trump ramped up immigration enforcement. In 2016, Barack Obama’s last full year as president, the NYPD received 80 detainer requests and complied with two.

Law 228 was passed in November but went into effect on January 30, 19 days after the Ragbir detention and subsequent protests. Williams called this “quite a coincidence,” but the NYPD reps assured the Council members that their prior internal department policy was to not coordinate or comply with ICE. They reiterated several times that they had not complied with a single detainer request of the 1,526 that were submitted by federal authorities to the NYPD, and that the only instances where the NYPD actively works with ICE are on task forces that are related to a different policy area that both NYPD and ICE agents happen to work on, such as human trafficking or the opioid epidemic.

The arrest and detention of Ragbir, who has had a detainer against him since 2006 as a result of a fraud conviction, at a routine check-in with immigration authorities has been extremely controversial among New York’s activist and political community. Ragbir, after a stint in ICE detention in Miami, is back in New York but faces another check-in on Saturday during which he could face deportation. With the Trump administration’s significant uptick in immigration enforcement, particularly against undocumented immigrants who have not committed felonies, ICE has been making sweeps in immigrant neighborhoods and at courthouses with or without the NYPD’s cooperation.

On Wednesday, Mayor Bill de Blasio sent a letter to Thomas Decker, the Field Office Director for New York’s ICE office, extolling Ragbir and pleading that he not be deported back to Trinidad, while also making the case that aggressive immigration enforcement in immigrant communities and courthouses is deteriorating trust between immigrant communities and law enforcement. De Blasio did not mention Ragbir’s prior conviction.

“The safety and interest of New Yorkers should be central to any determination concerning Mr. Ragbir, or other individuals arrested by ICE,” the letter continued. “Therefore, I request that ICE exercise its discretion to permit Mr. Ragbir to remain with his family in New York.”