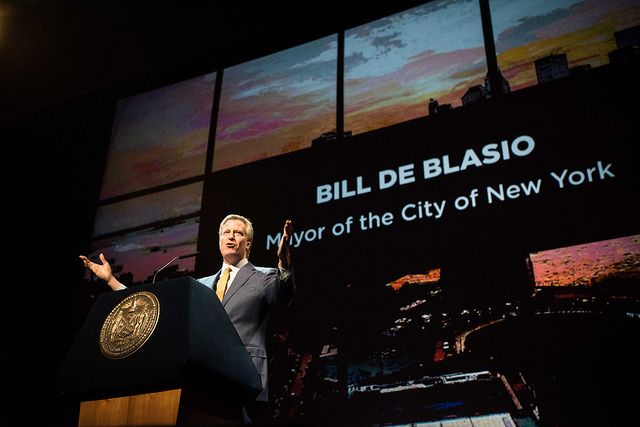 Mayor Bill de Blasio delivered his first State of the City speech of his second and final term at the Kings Theater in Brooklyn on Tuesday evening, mostly retreading old ground on policy while exploring new ways to improve the city’s “battered” democratic and electoral processes.

De Blasio, a Democrat, made few new policy announcements as he enumerated a 12-point “gameplan” to make the city fairer and safer while improving the lot of the most vulnerable New Yorkers. In resolute tones, the mayor reiterated a variety of major accomplishments and programs from his first term, promising to build on them as he counts down his remaining time leading the city. He did announce plans to call a charter revision commission to evaluate the city’s campaign finance and election systems, and plans to infuse more civics into city schools.

“Three years, ten months, and 15 days. That’s how long this administration has to ensure New York City becomes the fairest big city in America,” de Blasio said, using what is now a common refrain, though a relatively new one for the mayor.

“My mandate to my entire administration is this: Make every decision, whether about policy, or budget, or personnel, with this simple question in mind: Will this action help make us the fairest big city in America?” he said. While de Blasio has still not explained if New York lags behind other cities, large or small, or what policies from elsewhere the city should adopt, on Tuesday night he fleshed out a bit more of what fairness means to him.

As he often does, de Blasio spoke of the city’s unprecedented drop in crime and promised to expand neighborhood policing and the use of body cameras on police officers to make the city even safer while improving police-community relations. Following the success of universal pre-kindergarten, he said his administration is on an “aggressive path” to expand the program to all three-year-olds in the city, citing racial inequities built into the education system. He did not discuss integrating the city’s exceedingly segregated schools.

De Blasio did promise that in the weeks ahead he would address one specific goal of his Equity and Excellence education program -- getting all children reading at grade level by the third grade, when state standardized testing begins.

The mayor touted his ambitious affordable housing program as well, with its goal of preserving and creating 300,000 units of affordable housing by 2026, and emphasized the city’s efforts to ensure that current residents are the ones who benefit from expanded affordability by receiving jobs that pay well. His administration has set out to create 100,000 jobs over ten years that pay at least $50,000 per year each.

The mayor doubled down on what he sees as the city’s role in being “the antidote to broken policies in Washington” on climate change by taking action at the local level including stronger efforts to reduce carbon emissions and transitioning to an all-electric city car fleet.

Although de Blasio sparingly mentioned President Donald Trump and made no direct reference to Governor Andrew Cuomo except to praise him for an early voting funding proposal in the governor’s budget plan, he issued clear warnings about the “big fights ahead in Albany and Washington,” including for education and infrastructure funding, and made several calls on New Yorkers to pressure state leaders for policies like bail and voting reforms.

De Blasio vowed to push the state to provide full education aid to the city under the state Supreme Court’s Campaign for Fiscal Equity decision, and again advocated for a millionaire’s tax to fund the city’s subways and provide half-priced MetroCards to low-income New Yorkers. He made reference to congestion pricing, which he has repeatedly opposed as a “regressive tax” over the last year, but recently warmed to when the governor’s panel made its recommendations. “I believe in progressive taxation,” de Blasio said Tuesday. “That will always be my first goal when it comes to finding revenue. But I will sit down with leaders in Albany, any time, anywhere, to find solutions to the subway crisis.”

The mayor said his “one condition” on congestion pricing is that “the money raised in New York City stays in New York City,” and reiterated his calls for a “lockbox” provision in any new law that installs new fees for traveling into a Manhattan congestion zone.

He called for bail reform and speedy trial reform to pass in Albany, which are crucial to his administration’s goal of reducing the city’s jail population to about 5,000 and closing the Rikers Island jail complex. Later, he emphasized the need for election and voting reforms such as easier absentee voting and same-day voter registration, which would have to be approved by the state legislature.

Though the mayor has little influence in Washington, D.C and on the larger national stage, he nonetheless pledged to fight for the 30,000 New Yorkers and 700,000 Americans who are Dreamers, undocumented immigrants who came or were brought to the country as young people, have lived here for years, and currently face the threat of deportation under Trump.

In a reference to the recently passed federal tax code overhaul, de Blasio also added, “One day, one day soon, after an election or two, we will fight to rescind the Trump giveaways to the wealthy and big corporations.” The mayor’s somewhat cryptic reference to future elections won’t do anything to convince people of his repeated attempts to dispel the notion that he might explore a run for the presidency in 2020.

The mayor also said he would expand ThriveNYC, First Lady Chirlane McCray’s signature mental health program, promising mental health care access to all, and would redouble efforts to combat the opioid epidemic that has touched parts of the city by “increasing prevention, enforcement, and treatment.”

Although de Blasio did not mention the most recent scandals over lead paint and heating failures that have engulfed the city’s already ailing public housing system, the New York City Housing Authority (NYCHA), he touted his administration’s focus on NYCHA and promised to invest further in the system. “Our public housing residents are a priority for me and this administration, and the City Council as well,” he said in forceful defense, during the twelfth of his 12 initial points.

The novel elements of the mayor’s speech came near the end, as he delved into a ten-point “DemocracyNYC” agenda to "shake the foundation of the broken status quo right here in our state and our own city.”

Taking direct aim at the state’s “exclusionary” electoral system and the consistently low voter turnout in the city, de Blasio proposed a plan to reduce the effects of money in politics and to better engage city voters. “We must re-democratize a society that is losing its way,” he said.

De Blasio said he will call a Charter Revision Commission to create a plan for expanding public financing of city elections and reducing donor contribution limits to candidates. Typically, the City Council has legislated reforms to the city’s campaign finance system, which includes generous public matching, already incentivizes small-dollar donations, and is considered a national model. A charter commission would propose ballot referenda for New Yorkers to vote on, and the mayor plans to have them done in time for this year’s election in November, he said.

The commission will also be tasked with finding ways that the city government can disseminate information and conduct outreach for elections, which is currently the purview of the Board of Elections, a quasi-state agency that has long been criticized for its dysfunction. Noting that the BOE has resisted an offer of $20 million from the city for reforms, de Blasio repeated a few of those critiques, including the BOE’s failure to inform voters of poll site changes and lack of translation services for the city’s massive immigrant population. “And in the digital age, the best our Board of Elections will do to encourage you to vote is send you a postcard,” he derisively joked (though he later asked those in the audience to fill out a postcard pledging civic action).

Warning of the Russian interference in the 2016 presidential election, de Blasio also set aside $500,000 to bolster the BOE’s cybersecurity efforts.

In coming weeks, the mayor said he would appoint a Chief Democracy Officer charged with registering 1.5 million voters over four years, particularly by targeting 17-year-olds in high schools and voting-eligible students in the city’s colleges. He also announced a Civics for All education initiative for city schools that will include “rapid response lesson plans” to help students process current events, and, taking a cue from the New York City Council, announced a “participatory budgeting” component in which high schools will receive $2,000 that students can decide how to use. De Blasio also announced an online portal to inform New Yorkers about elections to local office.

The mayor also spoke of new lobbying disclosure requirements for city agency heads and officials that report directly to him, which will take effect March 1. De Blasio touted the measure as a transparency advancement, though the pledge, along with his campaign finance reform plans, also serve as reminders that the mayor has hid correspondence with outside advisors he dubbed “agents of the city,” gave extraordinary access to his campaign donors, and created a political nonprofit that accepted millions of dollars in contributions from entities with city business. 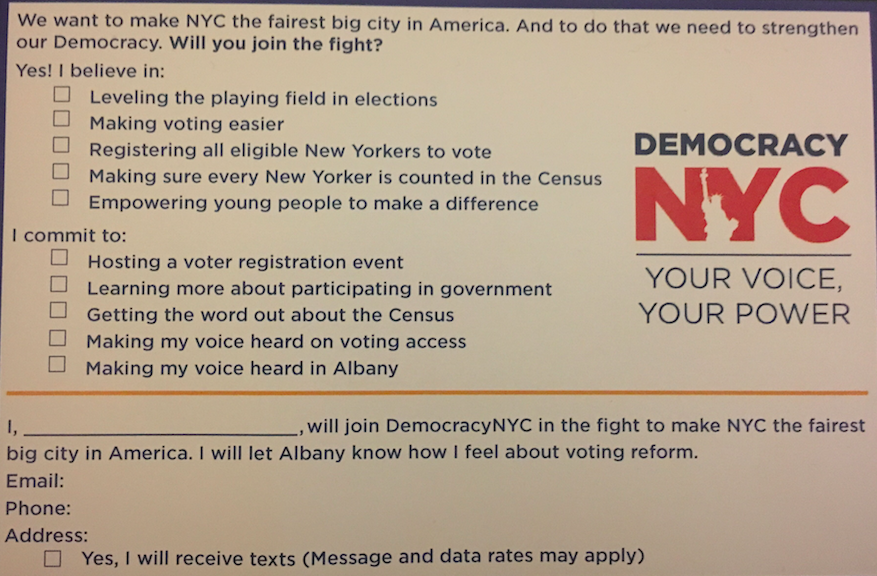 Finally, the mayor announced a massive outreach campaign to ensure all New Yorkers are counted in the 2020 Census. “Getting accurately counted can make all the difference for the size of our congressional delegation and the amount of the funding we get from Washington,” he said. “It’s about getting our fair share.”

De Blasio ended on a note of hope, holding up the postcard for his DemocracyNYC initiative, one of which was handed out to each attendee. The card included a checklist for how New Yorkers can choose to engage with city government and make their voice heard more broadly.

“We are poised at the beginning of a new age with a new and bolder chapter to be written,” he said, gesturing to the audience, “and its author will be you.”