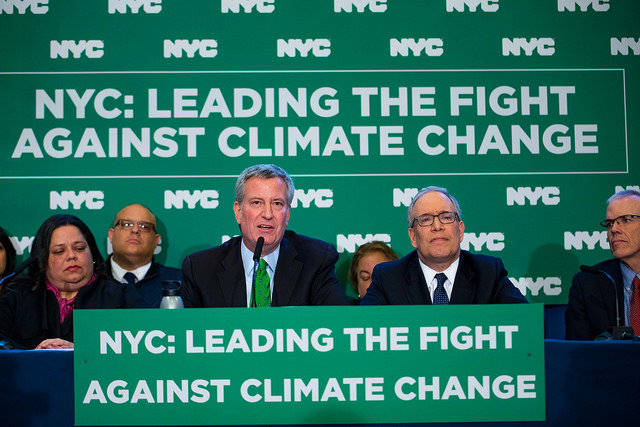 Comptroller Scott Stringer on Friday released his analysis of Mayor Bill de Blasio’s preliminary budget for fiscal year 2019, which begins July 1. Stringer said that the administration does not have enough of a “budget cushion” to rely on as economic prospects look gloomier going forward, urged de Blasio to reduce wasteful spending in what is an $88.67 billion budget plan, and unveiled his first “agency watch list,” initially including three city departments “of most concern when it comes to budgeting.”

For roughly 20 minutes in a conference room in the Dinkins Municipal Building, home to the comptroller’s offices, Stringer praised de Blasio’s budget for closing Rikers Island, expanding early childhood education, and funneling resources toward deficient heating systems in public housing, but also argued that various city agencies have not been sufficiently transparent or effective. The comptroller also warned about the city’s growing projected budget gaps for years to come, which are part of the outlook for next fiscal year, where a balanced budget is planned, as mandated by law.

In making his case for the need for the city needing additional savings, Stringer said that though the New York City economy is strong, growth will slow next fiscal year and beyond. He also pointed to federal factors that he said would adversely affect New Yorkers. “With President Trump’s proposed budget cuts going after the most vulnerable New Yorkers and his tax bill targeting our economy, it’s critical that New York City prepares for whatever comes tomorrow,” he said. “That means spending our limited resources in a way that achieves maximum impact.”

“I am calling on the Mayor to undertake real evaluations of this spending,” Stringer continued. “What are the goals of the programs? Are they being met? Are we measuring the outcomes?”

He added, “It’s time to start taking a hard, data-driven, quantified look at what these agencies are doing.”

Repeating questions he has raised in the past regarding DHS, Stringer said that while the city must allocate significant resources to help homeless people, it had not gotten the bang for its buck. He explained that spending on homeless services has soared, nearly doubling since 2013, while the homeless population in shelters has increased over the last five years by over 10,000 individuals.

“As the person who exposed this crisis with our sweeping audit of shelters in 2015, I support taking every measure we can to reduce homelessness,” he explained. “But if we’re going to solve this problem, we have to know: is our spending leading to results?”

Meanwhile, DOC has also seen its spending rise in recent years while the city’s jail population has declined by north of 30 percent in the last decade. During the same timeframe, the cost per year of housing each detainee has ballooned from $117,000 in 2008 to $270,000 in 2017.

Education spending has been mismanaged, Stringer said, also repeating past criticisms in citing “rampant waste and a lack of accountability at DOE.” According to Stringer, the DOE spends too much on bureaucracy and not enough in classrooms. He cited the large jump in employment at DOE headquarters. “Since 2012, DOE has added over 400 new central administrative staff,” he said. “That’s growth of 24 percent. But the number of teaching staff has only grown by half that rate, 12 percent.”

The comptroller also noted $1 billion of spending on broadband that has provided unsatisfactory Internet services, according to a survey of New York City public school teachers. What’s more, the city could not account for much of its investment in technological equipment. “In an audit my office did in 2014, DOE was unable to account for one-third of its computer monitors, laptops, and tablets,” he said.

More broadly, Stringer said the city should set aside more room in its budget to “help the city weather unexpected events.” The comptroller insists that the ideal range for the city’s “budget cushion” is between 12 and 18 percent of its yearly spending. De Blasio, for his part, maintains that the current 9 percent of spending is adequate, brushing aside Stringer’s recommendation.

“We are in uncertain times,” Stringer said Friday. “Economic growth is slowing down, especially when we look ahead to 2020,” Stringer said. “We need to do more to prepare.”

In a statement to Gotham Gazette Friday afternoon, de Blasio spokesperson Freddi Goldstein turned the comptroller’s analysis around. “The Mayor’s made dramatic investments in homeless outreach, our schools, and our corrections system,” she stated. “They have helped lead the city to records in job creation, test scores, and crime prevention. We appreciate the comptroller highlighting these gains.”

Beyond the proposed expense budget that de Blasio has put forward, Stringer also critiqued the other city spending plan that runs concurrently with the budget. “There is simply no accountability in the capital budget,” Stringer said. “And that means agencies simply do what they want, which may not be what the city needs.”

“Right now,” Stringer said, “we have huge pots of money appropriated, for only the most vaguely defined purposes.” As examples of the city’s mismanagement, Stringer cited a $33.5 million “acquisition fund” for the Economic Development Corporation (EDC), which, according to Stringer, has not been spent, a fire and rescue facility in Brooklyn that was $20 million over budget, as well as recent Brooklyn Bridge repairs that cost $140 million more than expected.

“Our capital planning and budgeting process is a disaster,” Stringer said Friday, “and it’s been allowed to continue for far too long.”