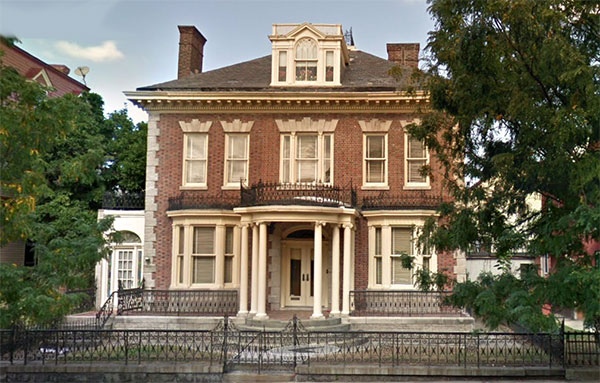 In October, the city’s Landmarks Preservation Commission voted to designate the Peter P. and Rosa M. Huberty House, at 1019 Bushwick Avenue in Brooklyn, as a city landmark.

“The designation of the Huberty House honors both the historic character of Bushwick Avenue as it developed in the early 20th century, as well as the contributions of architect Ulrich Huberty to the borough of Brooklyn," LPC Chair Meenakshi Srinivasan said at the time. “Today's landmark designation will preserve this splendid Colonial Revival for future generations of New Yorkers to enjoy."

A little more than three months later, on February 6, the item passed the City Council’s Subcommittee on Landmarks, Public Siting, and Maritime Uses. It then passed the Council’s Land Use Committee on February 8, and finally the full City Council on February 15. The landmarking has the support of the LPC, Council Member Antonio Reynoso, who represents the district the house sits in, Reynoso’s predecessor, Diana Reyna, Brooklyn Borough President Eric Adams, the Historic Districts Council, and the New York Landmarks Conservancy, to name a few.

The problem: the owner of the house, Virginia Giovinco, is staunchly against it.

Giovinco testified at a January 23 meeting of the Council’s Landmarks Subcommittee, when the landmarking of the house was being considered.

“It’s a terrible burden on me,” she told the subcommittee. “I just cannot live with that idea. So I strongly oppose this designation for that moment that I don’t have control over my house.”

The home has been in Giovinco’s family since 1937, when it was purchased by her grandfather, Luciano Giovinco, a tailor who had immigrated from Italy at the beginning of the 1900s. The house, a 4,000 square foot colonial revival mansion, was originally built in 1900 by the architect Ulrich Huberty for his parents, Peter and Rosa. Huberty also designed buildings such as the landmarked Williamsburgh Savings Bank, Hotel Bossert, and the Prospect Park Boathouse.

Giovinco, now in her eighties, claimed at the hearing that the city has been attempting to landmark the house for at least 15 years. Her main worry appeared to be losing the autonomy of regular homeownership. She testified that, over the course of the Giovinco family’s 81-year ownership of the house, it had been kept in immaculate condition and any improvements had not deviated from the original colonial style of the home.

Virginia Giovinco’s cousin Paul Giovinco also testified at the hearing, attesting that the house was not just within Virginia’s immediate family but rather a focal point for the entire extended family. Paul called out the city for not being supportive, saying that they had not received an offer from the city to cover a fixed portion of maintenance costs required by the landmarking.

“We’re not gonna go ahead and throw down some tar paper, and some shingles,” Paul said. “We’re gonna maintain it the same way. But I don’t see no compensation or help. So what is the landmark giving us?”

In response to testimony from the Giovincos, Council Members Daneek Miller and Mark Treyger discussed the need to strike a balance between the issues of homeowner autonomy and the need to preserve historic structures and communities through the landmarking process. Council Member Peter Koo recommended that the committee lay over the matter until further study.

At the February 15 meeting of the full City Council, Miller, Treyger, and Koo all voted to advance the landmarking.

“It is my understanding that the property owner was not in favor of the landmark designation,” Ulrich told Gotham Gazette. “Therefore I voted against it.”

Borelli went even further in his objections, suggesting that the landmarking is a violation of the owner’s personal liberties.

“No owner is treated fairly if their rights are taken away without compensation,” Borelli said in an email. “There is no other agency in government that has that power, only this commission that decides which buildings are more relevant than others.” Among the rights Borelli cited as being taken away by LPC include “everything from putting a new addition on; to painting it with purple polka dots; [t]o using aluminum siding; [t]o demolishing it, because the cost of maintaining it under LPC guidelines is costly.”

Borelli said the Landmarks Preservation Commission should be focusing more on landmarking buildings wherein preservation would be a public benefit, rather than simply picking “the prettiest house on the block.”

The Landmarks Preservation Commission describes itself as “the largest municipal preservation agency in the nation;” 36,000 buildings are landmarked properties in New York City. Most of those are located in larger historic districts, but there are 1,405 individually landmarked buildings, along with 120 “interior landmarks” and 10 “scenic landmarks,” which consist of city parks such as Central Park, Prospect Park, and Riverside Park. Its leadership is made up of 11 commissioners appointed by the mayor. When the LPC designates a city landmark, the designation must then be approved by the City Council’s Land Use Committee and then the full council.

Virginia Giovinco declined to comment for this story. She has been on record against the landmarking since at least 2013, when she testified at an LPC hearing with the same concerns as she has now: that landmarking the house would result in her losing autonomy over her property.

For its part, an LPC representative said that the commission has designated approximately 150 free-standing homes as landmarks, with another 2,000 being landmarked as part of a historic district. Zodet Negron, a spokesperson for the LPC, told Gotham Gazette that the LPC has designated eight single-family homes as landmarks in the past four years, receiving the support of six of the owners; in the end, the owner’s approval is not required for designation. Negron stated that the LPC had done “extensive outreach” with Giovinco and that it intended to work with her “to ensure a smooth regulatory process.”

“Our intent and approach is always to seek the cooperation of owners and establish a collaborative relationship that continues after designation,” Negron told Gotham Gazette. “Thousands of single-family homes are regulated by the Commission throughout the city, including both individual landmarks and within historic districts, and we work closely with homeowners to appropriately and expediently meet their needs.”

According the city’s administrative code, minor work on a landmarked property typically requires a permit from the LPC, unless another city agency deems an improvement necessary for safety. Major work such as demolitions or new construction requires more permissions from LPC, including a “certificate of no effect” on “protected architectural features,” a “certificate of appropriateness,” or are otherwise authorized to proceed with the work. The code also says that owners should keep properties in “good repair” and prevent decay and deterioration. Negron said “routine maintenance” of landmarked properties typically does not require review from LPC.

City Council Member Adrienne Adams, the chair of the Landmarks Subcommittee, also told Gotham Gazette that she had met with Giovinco after the hearing.

Though Bushwick Avenue is lined with many historic properties, only one other home on the avenue has been landmarked: the Catherina Lipsius House at 670 Bushwick Ave. Other landmarks on the stretch include a church, a Brooklyn Public Library branch, a Masonic Lodge, and the Williamsburg Houses NYCHA development.