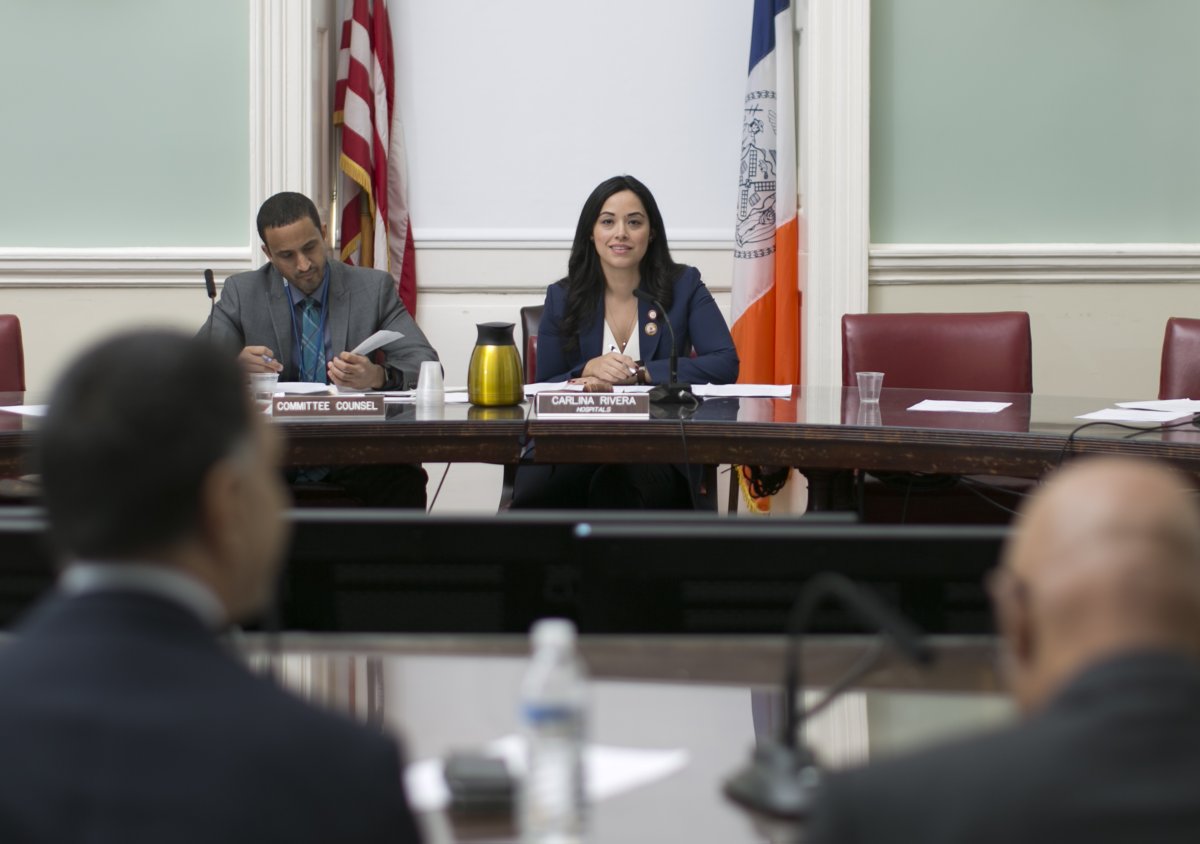 The new CEO of the city’s beleaguered Health + Hospitals (H+H) public hospital system, Dr. Mitchell Katz, testified in front of the City Council’s new hospitals committee, and its chair, Carlina Rivera, for the first time on Wednesday, discussing the progress of the “One New York” plan to 'transform' and improve the system.

“Its mission is to provide quality, comprehensive health services to all New Yorkers, regardless of their ability to pay,” Rivera said. “In effect, Health + Hospitals is the default system of care for Medicaid patients, the uninsured, and other vulnerable populations, and is integral to our system of safety net hospitals.” Rivera noted that approximately 70% of H+H patients are uninsured or on Medicaid.

H+H has faced numerous fiscal challenges over the past few years. When the original One New York report was released in 2016, its intention was to reduce an anticipated budget deficit of $1.8 billion in fiscal year 2020, which begins July 1, 2019.

Last fiscal year, the de Blasio administration provided $1.8 billion in city aid to H+H as its interim leadership also took measures to overhaul its operations and finances, before Katz was brought in from Los Angeles to accelerate that work. (That was an increase from $607 million in fiscal year 2011, according to the Citizens Budget Commission.)

A recent fiscal scare originating in the federal government concerned the potential defunding of the Disproportionate Share Hospital program, which provides additional funding for hospitals that see a disproportionate number of low income patients, who may be uninsured and/or on Medicaid. The threat of cuts, which has loomed since 2014 but has become especially acute since President Donald Trump took office, was averted for the immediate future with a recent two-year extension of funding in the latest federal stopgap measure passed in February. When the cuts take effect, federal and state funding is expected to drop by approximately $800 million.

Meanwhile, after H+H announced plans to file a lawsuit against New York state government for failing to provide $380 million in funding, Governor Andrew Cuomo relented, giving H+H $360 million of the $380 million H+H claimed it was owed in October. Cuomo had initially suggested that the city tap into its reserves to provide the funding.

Tellingly, Katz, who assumed his current role after leading the Los Angeles County Health Agency for seven years and turning a $250 million budget deficit into a $560 million budget surplus, did not focus his City Council testimony on short-term revenue streams coming from Albany and Washington but rather on what he assesses are deficient practices within H+H operations and bureaucracy that are hindering its ability to collect revenue to its full potential.

Katz outlined a seven-point plan to increase revenues without cutting vital services. It includes cutting administrative expenses, which Katz said has begun recently by eliminating outside consultants from the system to the tune of $16 million in savings, and investing in new “revenue generating positions” such as primary care doctors, pharmacists, and nurse practitioners instead of solely ER doctors, a goal Katz outlined at the beginning of his term.

Hiring more people will also cut down on wait times, Katz said, in response to Rivera bringing up the issue. Katz described waits for appointments as “hugely variable.”

“One of the things that I found distressing was at Bellevue, is that the wait for behavioral assessments for a kid is currently months,” Katz said. “Which, frankly, has nothing to do with money, because kids are fully insured.”

But perhaps the more significant stabilization schemes, which were the focus of more attention at the hearing, relate to reforming H+H’s billing processes and bringing more insured patients into the system. Because H+H has a reputation as the hospital network that serves the indigent, many insured people do not use municipal hospital services. As a result, Katz said there is a substantial amount of bureaucratic waste within the system due to poor administrative skills on the part of system workers, who normally work with people who are either uninsured or on Medicaid.

This point was hammered by Council Member Antonio Reynoso, who recently became a father and described his experience as an individual with private insurance at Woodhull Hospital, an H+H hospital “across the street” from his district. Reynoso effusively praised Woodhull’s maternity ward and other services, but chastised billing procedures as inefficient.

Katz agreed that H+H needs to develop better billing procedures, including diagnostically coding bills correctly, checking insurance cards, checking prior authorization, and better communication with insurance companies. He cited a skilled nursing facility that spends roughly $21 million on drugs but only has revenues of $5 million.

“That’s impossible,” Katz said, “because we’re talking about skilled nursing facilities where there are almost no uninsured patients.” Katz claimed that the $21 million was a fair market value for the drugs but that the significant revenue shortfall had its roots in poor billing practices.

The situation at the skilled nursing facility is only the tip of the iceberg. In response to a question from Rivera, H+H Chief Financial Officer Plachikkat Anantharam stated that H+H lost between $130 million and $290 million in 2017 as a result of chronic underbilling.

Further, Katz said that H+H should not be referring patients out of the system and into the private market. Via MetroPlus insurance, H+H by proxy essentially pays private hospital operators to provide care, resulting in a significant amount of lost revenue.

Katz also stated that H+H needs to begin offering services that are “well reimbursed.” He illustrated this point by comparing behavioral health, for which H+H is the largest provider in the city and which is “poorly reimbursed,” and angioplasties, a heart procedure that is well reimbursed by insurance companies, but is rarely performed by H+H, and only at Bellevue Hospital.

Katz also wants, as part of his plan, to “convert uninsured people who qualify for insurance to be insured,” whether through Medicaid or MetroPlus, the government sponsored health insurance provider wholly owned by H+H that insures around a half-million New Yorkers and is offered on the Affordable Care Act exchange. Katz identified 250,000 people in the city who are uninsured but qualify for insurance coverage, out of a total of 667,000 uninsured people in the city.

Regardless, the Council members and Katz acknowledged that signing up tens of thousands of people for insurance is easier said than done. Council Member Mark Levine, chair of the Council’s health committee, asked whether it was possible to enroll patients who walk into a facility on the spot, and why this hadn’t been done in the past.

“Is that another cultural challenge you have to overcome,” he asked. “Is that a resource issue? Or am I making it seem simpler than it really is?”

“No, Council Member, I think you’re right, and accurate. It’s both of those things,” Katz responded.

“I think another part of that is that there’s no -- right now, we haven’t constructed a system to make it that that’s the easiest choice for the person, right, to be able to enroll in insurance,” he continued. “We’ve kind of made it easier to pay $10, which might be the same copay that they would pay if they had insurance. But the difference between what our system and city would receive is huge.”

Katz cited his experience in Los Angeles as evidence that the public hospitals system could be stabilized without attrition, or mass firings in other terms. Indeed, as Citizens Budget Commission noted in its analysis, "Lessons from La La Land," previewing Katz's takeover at H+H, "The good news was all on the revenue side."

“When I started in Los Angeles, there was also a deficit. It was $226 million, which at the time seemed to me like a lot of money, before I came to New York City,” Katz said, eliciting laughter from the audience of healthcare advocates and professionals in the Council’s Committee room. “But when I left, not only did we have a surplus, but we had added 1,500 public sector jobs. So one thing I do know is that you have to take financial problems seriously, but you can grow out of financial problems sometimes more easily than you can shrink out of financial problems.”

Reynoso was particularly fond of that line. “Grow out of a financial problem, that’s a great way to put it,” he said.