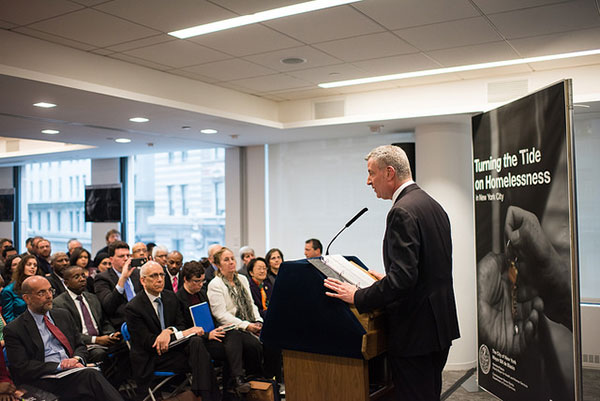 The city’s homelessness crisis has been a major challenge for Mayor Bill de Blasio since he took office in 2014. While the crisis was growing over the course of decades, key decisions were made just a few years before de Blasio became mayor that appear to have accelerated the trend, namely the elimination of city and state rental subsidy programs.

When de Blasio became mayor, he set out to reinstitute rental subsidy programming, among other pieces of his homelessness and housing agendas, which have continued to evolve over the course of his more than four years in office. But, the city’s homelessness population continued to increase, hitting record highs above 60,000 individuals, and de Blasio has faced a great deal of criticism for not handling the issue better, including on specifics like shelter safety, outreach to homeless people on the streets, and attention to homeless students.

His voucher programs have not been as successful as he hoped, though he has been fairly aggressive in preventing evictions and city efforts have helped keep thousands at risk of displacement in their homes through legal services and rent-arrears payments.

Generally, it is the sheer number of homeless people living in the city that continues to frustrate the mayor and other New Yorkers. While the de Blasio administration’s efforts have shown some results in breaking the trajectory of the increase in homelessness, with the population relatively steady for much of 2017, there are major questions about the city’s ability and willingness to do what it might take to significantly reduce that number. Indeed, in de Blasio’s second major reboot of his approach to homelessness, his Turning the Tide on Homelessness report issued in February 2017, the mayor announced a goal of reducing homelessness to about 57,500 in five years, which would mark the end of his tenure as mayor if he serves his full two terms.

A leading policy advocate, Giselle Routhier of Coalition for the Homeless, recently outlined several areas of concern with de Blasio’s policies during an appearance on the Max & Murphy podcast from Gotham Gazette and City Limits.

Routhier is the Coalition’s policy director and author of its recent annual report, “The State of the Homeless,” which looks at “how the city and state can tackle homelessness by bringing housing investment to scale.”

According to the report, an average of 63,495 people slept in the city’s homeless shelters each night in December 2017; overall in 2017, more than 110,000 city students were homeless at some point; and nearly one in five homeless parents today were homeless as a child.

During the podcast appearance, Routhier gave de Blasio some credit, but stressed the urgency of the situation and criticized the mayor for not going nearly far enough. “So what the mayor has done is gone from nothing to something,” she said. Adding that, “he has not been bold enough to implement policies to actually ‘turn the tide’ as of yet, as said in his plan that he released last year.”

“I think it’s OK to say that [the homeless population is] stabilized. It’s important to remember that it’s stabilized basically at record levels,” Routhier said. Of the mayor’s goal for homeless census reduction, Routhier said, “2,500 people over five years. Not households, people. That’s fewer households. That’s crazy. We can’t accept that as an appropriate solution.”

When asked what she would have done differently, Routhier expressed her frustration that, although the plan was bringing sorely needed improvements to the shelter system, it did not create enough permanent housing.

Routhier did recognize the city’s significant and various efforts to mitigate the crisis and to help families avoid homelessness. She pointed out that de Blasio inherited a very tough situation from his predecessor. In 2006, Mayor Bloomberg ended a series of housing assistance programs for the homeless, and drastically reduced the use of key federal housing resources, and “had these Federally funded resources been consistently deployed to serve homeless families and individuals over the past decade, over 36,000 more households would have moved out of NYC shelters into stable, Federally subsidized homes,” according to Routhier’s report. De Blasio has reinstated a slate of city-funded subsidies and some access for homeless people to public housing and Section 8 vouchers.

Both on the podcast and in her report, Routhier commended the city’s substantial spending on rent subsidies, and the extension of free legal services to tenants threatened with eviction. She wrote that subsidizing tenants’ rent “is a fiscally sound investment and often costs a fraction of the $61,262 it costs per year to provide emergency shelter for a family.”

A de Blasio administration spokesperson, responding to Gotham Gazette inquiries, said that, without the administration’s initiatives, there would be roughly 70,000 people in shelters today, as opposed to the 60,366 in the shelter census for March 14, according to city figures.

“We are building and protecting affordable homes for families—including those facing homeless—at a record pace,” said Jaclyn Rothenberg, a spokesperson for Mayor de Blasio, in a statement to Gotham Gazette. “Between our affordable and supportive housing plans, free legal help for tenants fighting eviction, and rent assistance programs, we’re headed in the right direction.”

Routhier applauded the mayor’s initiatives to improve the quality and accessibility of its shelter system, which has expanded in an ad-hoc manner for years, and still needs a lot of attention. She and many others support the de Blasio plan to end the use of commercial hotels and so-called cluster site apartment rentals as homeless shelters, and to continue to fix up and secure existing shelters while opening dozens of new ones in an effort to keep homeless people in their communities and closer to their prior homes.

The city is now spending $217 million on shelter security, according to a spokesperson for the city. It created a Shelter Repair Squad that conducted more than 34,000 shelter inspections in 2016 and 2017. It tightened shelter regulations to make sure they were functioning adequately. It has doubled its investment in street outreach programs, looking to spend $97.6 million in FY18. It has hired liaison workers with the Department of Education to help families address transfer options, transportation requirements, and special education needs. According to an audit by city Comptroller Scott Stringer’s office done in 2015 and 2016, a sample of 73 homeless students were chronically absent or late and not given the proper attention from the DOE.

“The two things can’t be divorced in our minds,” Routhier said of improving shelters and providing permanent housing. In her report, she wrote that, “in 2017 there were more than 860,000 households that needed to spend less than $800 on rent in order for their apartment to be affordable (consuming 30 percent or less of income), but only 350,000 such apartments existed - a shortage of more than 510,000 apartments.”

Both the mayor and Routhier see this lack of affordability in the rental market as the major driver of homelessness in New York City. However, they have different views on what to do about it.

Crucially, Routhier wants the mayor to change the composition of his affordable housing plan, Housing New York 2.0. Of the projected 300,000 “affordable” units to be built or preserved, 15,000 units are allocated to homeless households. Routhier added, “to put that in context, Mayor Koch, over a shorter time period, did half as many housing units over all, and allocated more to homeless families at a time when homelessness was a third of what it is today.”

Routhier wants the mayor to double the allocation to 30,000 units to serve homeless households, of which 24,000 units should be newly-built, in order to ensure that they are quickly available (virtually all “preserved” affordable units are currently occupied). For Routhier, this is the best way for the city to ensure a “robust supply of housing that’s going to be available to people of extremely low incomes, over the long term.”

During the podcast, Routhier further said that Mayor de Blasio is driven by “an ideological desire to create housing for everybody, in all income bands, when in fact that doesn’t really match with the data that show where the housing need really is.” De Blasio has emphasized that the city needs to affordable housing for families across much of the income spectrum, including middle-class families. But Routhier said, “If you really look at the data, people that are at 80 or 100% of AMI, that are making $80,000 to $100,000 a year, they’re going to be OK, it’s going to be possible for them to find housing in the market.” She believes that the mayor should build housing to address the highest-need demand, even if it means fewer overall units, but more at lower affordability thresholds.

In her report, Routhier also criticized top government officials over not following through quickly enough with their pledges to create supportive housing, which is permanent affordable housing that includes social services. “Despite the Mayor and Governor both making historic commitments in 2015 and 2016 to fund a combined 35,000 units of supportive housing...The City has so far opened only approximately 200 units of supportive housing under its NYC 15/15 commitment, despite the goal of opening over 500 units before the end of 2017. The State so far has opened none.”

Routhier went further in her criticism for Governor Andrew Cuomo’s administration. Cuomo, a second-term Democrat running for reelection this year, is a former federal housing secretary who has touted his own expertise in dealing with homelessness, but has not been effective at reducing the rising homeless population in the state.

Along with citing the lack of state support for subsidy programs, Routhier noted a recent NY1 segment by reporter Courtney Gross, which showed that state prisons are often discharging parolees who wind up going straight into the New York City shelter system. In 2017, the shelters accepted more than 4,000 people from upstate prisons, according to Routhier’s report. What’s more, the state has “systematically cut off cost-sharing with the city on a number of things.” For example, the cost of the shelter system has increased by $500 million in recent years, and the state has only supplied 5% of those funds, Routhier said during the podcast.

Voicing her fears about the federal government, which has been disinvesting from public housing for decades, and which is currently considering further cuts to the Housing and Urban Development budget, Routhier said that “It leaves the responsibility to the city and the state to then come up with those resources in a much more aggressive way, which is very challenging.”

Routhier’s report includes further policy recommendations which would help homeless families and individuals find permanent housing, including measures to aggressively enforce the source-of-income anti-discrimination law; establish a proper inspection protocol to guarantee that all housing placements made through NYCHA, section 8, or city subsidies are adequate for their families; increase the number of Section 8 vouchers provided to homeless families from 500 to 2,000 a year;  increase the number of public housing placements to 3,000 a year; and provide all homeless individuals and families with housing application and search assistance.

On the podcast, Routhier said that if the city adopted the Coalition for the Homeless proposals, “we could reduce the shelter census by 30%.” She claims that, while her proposals are aggressive, they are also realistic. “There are tools in our hands, and the mayor can use these tools to really advance his housing policy and to decrease homelessness.”

***
by Gabriel Slaughter and Ben Max