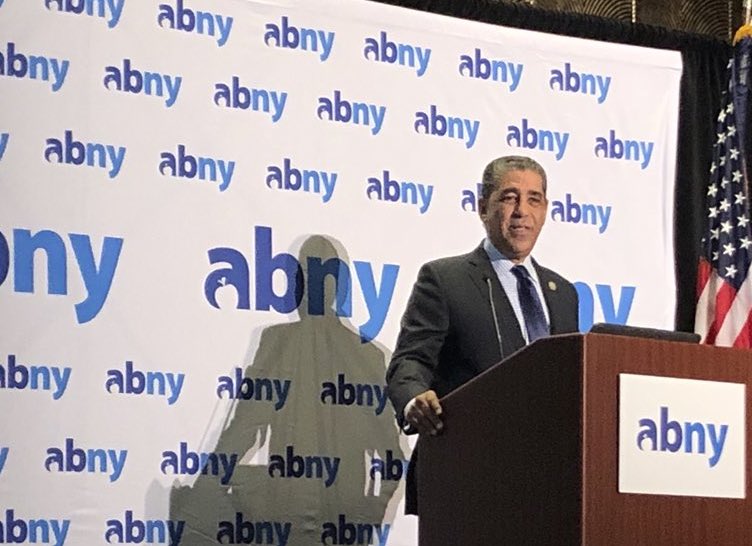 Some New York officials are nervous about 2020 and not just because of the presidential election that year. The year will also feature the next United States Census, the once-every-decade attempted count of everyone living in the United States that dictates representation in Congress and affects the drawing of legislative districts, federal funding, and more.

On Friday morning, the Association for a Better New York hosted a census-focused event featuring New York Department of City of Planning chief demographer Joseph Salvo and New York Congressional Rep. Adriano Espaillat, who both spoke about what’s at stake in the census, the challenges the city faces in executing the count, and strategies to combat those potential pitfalls. New Yorkers, they both feared, are at risk of being undercounted in the 2020 Census.

“The census determines how many seats we have in the House [of Representatives]. And New York is at real risk of losing a seat or two in the census,” said Steven Rubenstein, chair of ABNY, to the roughly 100 attendees. Along with political representation in the House, the New York census influences how the seats are allocated in the state and municipal government. And, as Espaillat noted during his remarks, it influences funding levels for essential social services, education, housing programs, and more.

“New York City needs an accurate count, but history has told us that is hard to get,” said Rubenstein.

Indeed, in the 2010 census, the city trailed behind the national average in collecting census information via mail-return, though responses were up from 2000, while the national average decreased in relation to the previous census. Specifically, 63 percent of New Yorkers and just over 74 percent nationwide mailed in their census information, according to The New York Times.

And the 2020 census poses unique challenges and uncertainties that may complicate accumulating data. Due to anti-immigrant posturing and policies from Washington, D.C., along with increasing privacy concerns and general distrust of government, Salvo and Espaillat expressed worry that the current environment would throw a wrench in the census process.

There are lingering questions at the Census Bureau, too, Salvo said. For example, at the time the federal government had yet to be determined if the census will ask for citizenship status -- but a few days after the ABNY event, the announcement came Monday that it would, setting off a firestorm of criticism and worry. The amount of funding allocated toward community outreach is another unknown variable in the  equation. What’s more, the Census Bureau has yet to be assigned a Director or a Deputy Director, which Salvo said is under the control of Secretary of Commerce Wilbur Ross. Commerce announced Monday that it would include the citizenship question, which would be the first time since the 1950s that such a question will be included, according to multiple reports.

Additionally, in New York City, hundreds of thousands of new homes and unconventional living arrangements may be hard to track, making it difficult to enumerate many residents. During his presentation, Salvo displayed examples of living arrangements that are less likely to be included on the city’s address list, such as basements, attics, and garages. Counting people that live in either unconventional or illegal dwellings is another way to ensure everyone is accounted for. But the census, he insisted, is “agnostic” on legality of the homes. (He also wants it to be agnostic on citizenship).

Salvo said one of the keys to guaranteeing as much of the population is included in the census is establishing an accurate address list, which he labeled the “foundation” of the census. The compilation of that list is soon to be completed. It could have around 3.6 million addresses, according to The Times.

City Planning officials will then go block-to-block in select locations to find addresses that may have been left out of the list. Notably, the 2010 census omitted 50,000 people in Brooklyn and Queens because the Census Bureau incorrectly considered a number of homes to be vacant.

Next, City Planning will enlist New York community leaders to spread the word about the census and the importance of completing and submitting census data. After the information is sent by mail, Census Bureau employees will go door-to-door to add to the census those yet to send in their information.

In order to improve accuracy and responsiveness, the 2020 census will encourage response via the internet, will include a tracking of census operations in real time, and will use data, such as postal records, to identify if units are vacant or have people living in them. In addition, the 2020 census will allow people to write in their racial and ethnic background on the form if they choose to do so, allowing people who don’t fit neatly into the Hispanic, Black, White and Asian boxes to more accurately capture themselves, Salvo said.

At the event, Espaillat offered his perspective on why boosting participation in the census is crucial. “It’s really a great tool to understand who we are as a city and as a state. It also drives the allocation of $7 billion of federal funding to people that may need programs -- education, health care, transportation, as well as food stamps and Medicaid,” he said. “All these very important programs that help our city and help the neediest among us.”

Of the consequences of undercounting the city’s population in the census, Salvo said, “It hurts business; it hurts our economy.”

Espaillat, a Democrat and the first formerly-undocumented member of the House of Representatives, also spoke to the particular challenges in accumulating accurate information in his Upper Manhattan and Bronx district. “It makes it hard to count,” he said of the diversity in his district. “Minorities have long been seriously undercounted. Latinos and African-Americans. In the last census we had one of the highest non-response rates in the state.”

He added, “When you translate that into numbers, it’s huge numbers that very well may translate into losing a seat, or losing all those important services that we’re able to get through the census count.”

Salvo also said that not all low-income, majority-minority neighborhoods are uniform in their census responses. “That map is very complex,” he said in the gaggle, referring to a color-coded map of census response rates by neighborhood. The map, in essence, showed that in 2010, several predominantly Hispanic neighborhoods had high response rates, while certain middle-class, largely black areas responded to the census at comparatively lower rates. “There is no single answer to outreach is what that map says. There are poor areas that are doing incredibly well…because their local leaders have come out.”

“In other areas, where frankly there is money and a lot of home ownership,” he explained, “they don’t answer.”

According to Salvo, the particular challenges within different neighborhoods underscores the importance of community involvement to supplement the technical aspects of the process that fall under his purview. “What I’m trying to point out here is there’s not one formula. Outreach does make a difference,” he said.

“We have to convince community leaders that they have to come forward and tell the city who they are,” he said during his presentation. “Unless we make it personal, we’re not going to overcome this.”

Note: this story has been updated to reflect that the federal government announced plans to include a citizenship question on the 2020 census.