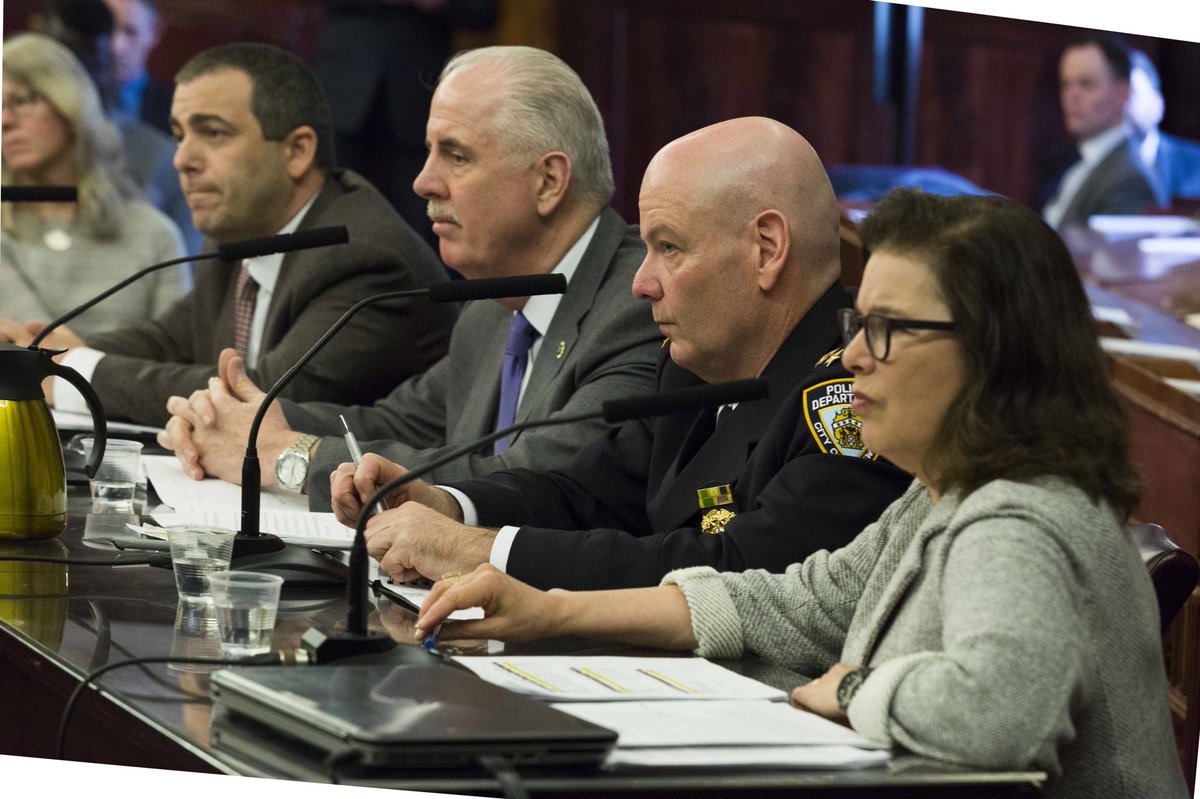 At a tense oversight hearing examining the NYPD's response to sex crimes on Monday, the NYPD opposed all four bills introduced by the City Council in response to a Department of Investigation report released two weeks earlier.

The bills seek to require evidence-based models to determine staffing levels for the Special Victims Division, more training for sex crimes detectives, and a digital, searchable case management system for the SVD.

On March 27, following a year-long investigation, the DOI released a report stating that the NYPD's Special Victims Division has been chronically understaffed for years, with only 67 detectives available to investigate roughly 5,600 sex crimes per year (ranging from rape to groping).

As a result, “a full exhaustive work effort [for every sex crime investigation] has not been possible," wrote Michael Osgood, Deputy Chief of the Special Victims Division, in one of the many internal correspondences Osgood sent to NYPD higher-ups asking for more investigators and included in the DOI report.

Osgood did not testify at the hearing.

Advocates, sexual assault survivors, a former Special Victims sergeant, and other members of the NYPD testified before the City Council regarding the NYPD's handling of sex crimes. While survivors, advocates, and the former Special Victims sergeant say the NYPD needs to act to improve the experience of victims who report their assaults, the NYPD claims no need for improvement.

Officially, the NYPD has 90 days to respond to the DOI's findings, which NYPD officials repeated several times at the hearing when asked specific questions.

But in an informal response issued on its website, the NYPD rebutted the DOI's findings, calling its report "an investigation in name only" and stating there are 85 detectives available to investigate adult sex crimes, not 67.

"The number of detectives assigned to actively investigate adult sex crimes is 67 (not 85) and the NYPD did not dispute that number last Friday when we discussed the report with NYPD officials," the DOI said in a statement issued in response.

By Monday morning, the NYPD had added another 20 detectives to the Special Victims Division, 15 from patrol, five from detectives squads. Chief of Detectives Robert Boyce said that brought the total number of detectives assigned to investigate adult sex crimes to 100 (but did not account for the 100 being less than the 20 he said they added and the 85 the NYPD previously asserted).

For comparison, homicide investigations are similar in length and complexity to sexual assault investigations, and the city's homicide squads had 101 detectives to investigate 282 homicides in 2017, according to the DOI report.

The DOI made 12 recommendations, including that the NYPD hire 73 additional detectives "to meet the minimum investigative capacity required by an evidence-backed and nationally-accepted staffing analysis model" known as the Prummel model.

The DOI also said the NYPD should increase training for adult sex crimes detectives, invest in a new case management system, and renovate or relocate the facilities of all the special victims units that handle adult sex crimes.

"Investigators are not properly trained, facilities are not suitable, and wait times are extensive. It is no wonder that victims don’t report more often," said Council Member Richards at Monday’s hearing. "And it seems that NYPD leadership is just fine with victims of sex crimes being ignored."

Chief of Patrol Terrence Monahan, Deputy Commissioner of Collaborative Policing Susan Herman, and Director of Legislative Affairs Oleg Chernyavsky testified before the Council. Chief of Detectives Boyce, who is on the verge of retirement from the NYPD, was also seated at the table and fielded questions. Though Council members said they wanted to hear from Chief Osgood as head of the Special Victims Division, the four NYPD officials seated at the table took virtually all of the questions, along with some terse interjections from Deputy Commissioner for Legal Matters Larry Byrne.

By and large, NYPD officials asserted that the department takes rape seriously, that both staffing and training are adequate, and that their electronic case management system is sufficient.

Chernyavsky said that the bills requiring additional training would "dilute the police commissioner’s authority by dictating a particular method and duration of training."

In response to Council Member Debi Rose's bill requiring the NYPD to use evidence-based models to determine appropriate staffing levels for the Special Victims Division, Chernyavsky said, "The requirements of this bill, however, erode and encroach upon the most basic responsibilities of the police commissioner to manage this agency and its personnel."

However, Chernyavsky's response ignores the fact that the head of the Special Victims Division requested additional staffing from multiple commissioners over the course of years. The DOI report includes dozens of pages of internal NYPD communications wherein Osgood repeatedly requests additional investigators to be added to the division.

As the DOI report notes, the caseload of the city's adult sex crimes detectives has increased by 65.3 percent since 2009, when there were 72 detectives.

"I cannot understand how anyone can argue with these recommendations," said retired Special Victims Sergeant Michael Bock, who worked with the division for years. "None will be detrimental to investigations. What are we afraid of?"

Bock appeared before the Council after the NYPD representatives, none of whom stayed to hear his testimony. The department left behind two people to monitor the rest of the hearing.

Despite assurances from the NYPD that the SVD is adequately staffed, that training is sufficient, and that the division's electronic case management system is adequate, the testimonies of many sexual assault victims and advocates indicate otherwise.

As one woman, Desdemona Meck, testified, "Two months after moving to New York City, two men attempted to rape me in the Bronx." A few hours after the assault, she received a rape kit and reported the rape to the precinct.

"The detective told me I have to learn to be smarter in New York City, that I should toughen up, and in the future not be so nice to strangers. She went on to ask me if I was positive I hadn't somehow made it seem as though the sex was something I had wanted."

Meck said the detective's reaction made her feel "shameful." Meck went on to identify both of the assailants through mugshots. The detective deterred Meck from bringing the case to trial. "She seemed confident in her belief that spending more time on the case would be a waste."

Advocates who testified at the hearing like Mary Haviland, Jane Manning, Christopher Bromson, and Angela Fernandez have worked very closely with both the NYPD and sexual assault victims for years. Some attend private meetings with NYPD officials, have attended trainings for Special Victims detectives and have likewise had those detectives attend their advocate trainings.

Haviland, executive director of the New York City Alliance Against Sexual Assault, is currently involved in an audit of closed sex crimes cases. Bromson, the executive director of the Crime Victims Treatment Center, and Manning, head of Women's Justice NOW, have assisted many sexual assault victims who have come to their organizations for help, often after reporting their rape to the NYPD goes awry.

"This issue of inadequate staff and inadequate training is something that advocates have been bringing up to the NYPD for years, we've been pleading for those things for years," said Manning.

Fernandez represents a different group of advocates who were largely not present at the hearing -- ones who work in hospitals running programs for sexual assault survivors. As the DOI report notes, sexual assault victims often have to wait hours to see a detective after reporting their assault and getting a rape kit done in a hospital. Detectives are supposed to come to the victim in the hospital, but that doesn't always happen.

"One service provider described how a client spent the entire night at a hospital waiting for an SVD detective to arrive," DOI investigators wrote in their report. "When no detective showed up, the victim, thoroughly discouraged, decided against reporting the crime to the police and went home."

Over the weekend, the NYPD rolled out a public awareness campaign aimed at increasing reporting of sex crimes.

Yet without more detectives assigned to investigate reported sex crimes, some victims who report their assaults will continue to suffer in the ways advocates and victims described at the hearing.

Both Council Members Rosenthal and Rose expressed concern over the NYPD's mixed messages -- at the same time they have put out a public awareness campaign to get more people to report their sexual assault, they have also been reluctant to add more staff to the division responsible for investigating those sexual assaults.

"With the increase in reporting, will there be enough personnel to handle these cases?" Rose asked. "It is imperative that they have enough staff to investigate these cases, to avoid the re-victimization of the people who step forward."

The NYPD's refusal to allocate adequate resources to the Special Victims Division has far-reaching consequences for victims of sexual assault and discourages victims of sexual assault from coming forward to report what happened to them. NYPD Commissioner James O'Neill did say recently that when he names a replacement for the retiring Boyce as chief of detectives, that person will do a full review of the SVD.

While the NYPD currently maintains that they have an adequate number of investigators staffing the SVD, Bock, the recently retired Special Victims sergeant, says otherwise.

"I really believe the DOI report nailed it. The NYPD's denial is upsetting," Bock said. "For a long time, the running joke in the [Special Victims] office was, 'Can I have another cinder block as I'm swimming in the pool?'...Having 20 open cases on your screen doesn't feel good."