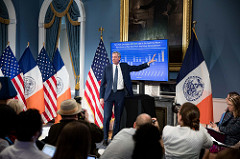 Mayor de Blasio released his Executive Budget plan for next fiscal year, showing $89 billion in planned spending, which includes a 5.8% increase in city funds. De Blasio has grown the budget consistently over his four-plus years as mayor, something he's been able to do thanks to a very successful city economy.

In the new budget plan, which will form the basis of negotiations with the City Council before a deal is due by July 1, de Blasio made several new investments, had to account for state budget actions, and left out several top Council priorities.

On this episode of the podcast, we dig into the mayor's new budget proposal and what's next in the city budget process.