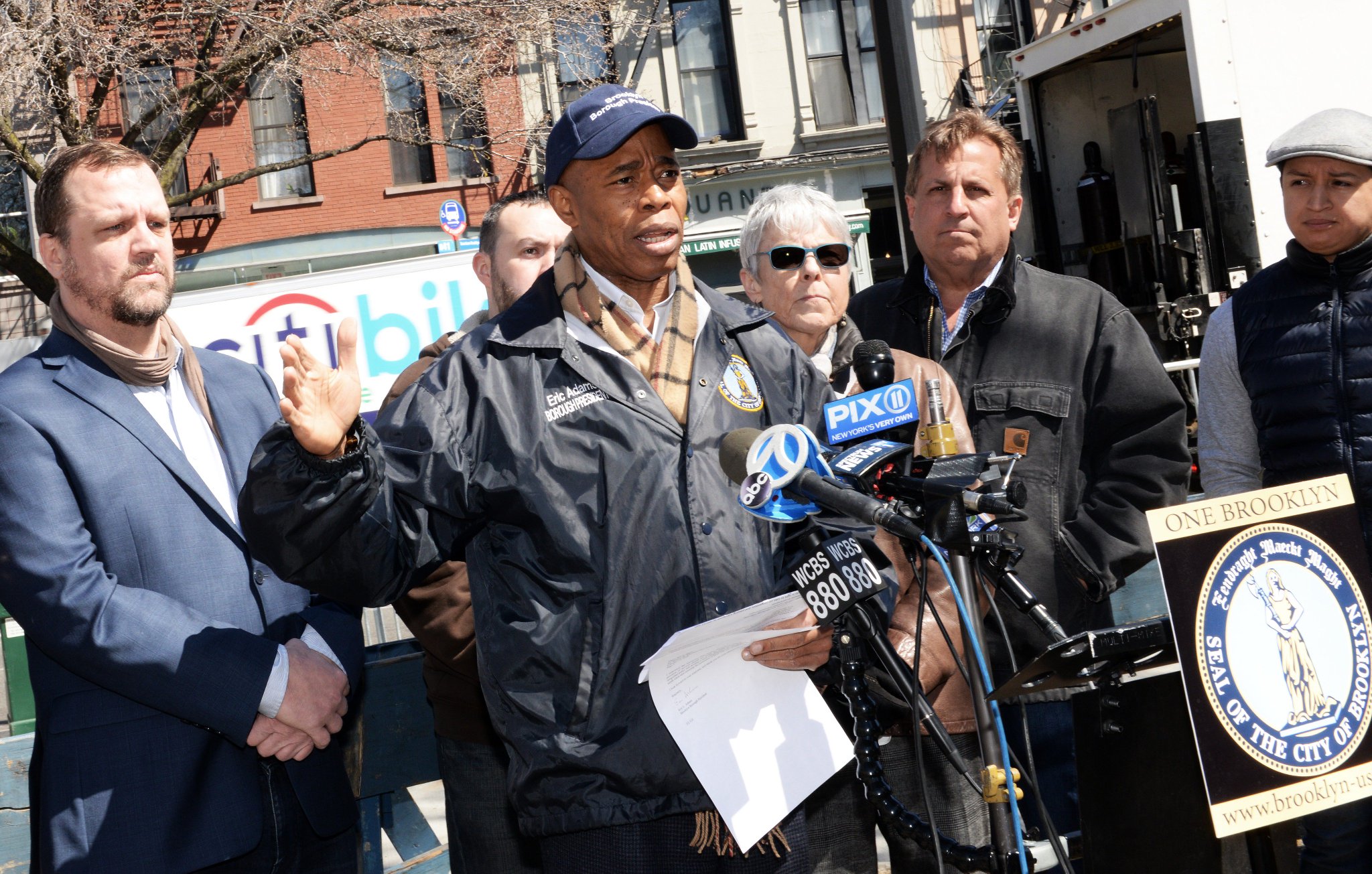 “I’m working towards City Hall,” Brooklyn Borough President Eric Adams said on Tuesday, explaining during a wide-ranging interview that he has begun planning his run for mayor.

It’s no secret that Adams, 57, who was elected borough president in 2013 and reelected last year, wants to succeed Mayor Bill de Blasio, a fellow Democrat who will be term-limited out of office at the end of 2021 -- he has made that clear for years. But on Tuesday, during an appearance on the Max & Murphy podcast from Gotham Gazette and City Limits, Adams for the first time publicly offered insight into his vision for running the city and what part of his campaign pitch will be.

“What we’ve been able to do here in Brooklyn, and my perception of where I believe the city needs to go, I think it’s different from all the candidates who are running and thinking about running,” he said, sitting in the vast conference room of Brooklyn Borough Hall.

That difference comes in part from Adams’ background in policing. For 22 years, the borough president was a member of the NYPD. In the early 1990s, he said on Tuesday, he was active in developing the management system CompStat under Police Commissioner Bill Bratton — a system that has been credited for helping to drastically reduce crime and, according to Adams, “changed the culture of policing not only for New York but for the rest of America.”

“When the police department made this change, every agency should have followed,” Adams said, pivoting toward his vision for managing the city’s immense bureaucracy and dozens of agencies. “We have enough money, the right agencies, and the right people in place, but the systems are broken.”

A CompStat approach across all agencies, Adams said, would include technology to inspect and track progress in “real time.” “I’m going to professionalize our agencies so...we can start seeing our results not yearly, but daily. CompStat would be a model that would be used in every agency.”

CompStat is known for its data-driven approach and tough culture of accountability on NYPD leaders, such as precinct commanders. “Commissioner Bratton came in and said, ‘We have to change the culture’, and he had to move people out of the way who couldn’t understand that change,” Adams said, adding there must be clear goals that relevant agencies are working together to achieve, efforts that today are too disjointed.

Adams is typically supportive of de Blasio — even applauding the mayor during the podcast for “doing a good job” in improving access to after-school care and reducing both the use of stop-and-frisk policing as well as crime, among other positives he cited. But the borough president also noted problems with education, healthcare, police accountability, and affordability in the city, saying: “when you look at it, either we’re going downwards or we’re flat-lining, we don’t see any improvements.”

Using the example of unemployment (which was at a near-record low of 4.2 percent in March 2018, down from 8.3 percent when de Blasio first took office in January 2014) Adams said government agencies must work together more coherently.

“I want to create a clear mission for the city that means every agency, although they have their individual portion of the mission, they should be all moving towards that vision. If the goal is to improve unemployment numbers, then we cannot have agencies that are in the way of allowing companies to open and do business in the city,” he said.

“Yes, your mission might be to ensure buildings are safe, but that mission should also feed into the overall mission of the city. It should not take a year to grant a building permit.”

Though there’s a ways to go until Adams presents voters his promises ahead of the 2021 mayoral election -- where he is expected to face Public Advocate Letitia James, Comptroller Scott Stringer, Bronx Borough President Ruben Diaz, Jr., and possibly others in the Democratic primary -- the Brooklyn borough president is clearly thinking about how he will make his pitch and what would separate him from the crowd.

During the podcast, Adams touched on other aspects of current policy debates that may come into play during a future campaign, but are already playing out now.

Most notably, Adams said he wants to examine whether the city should “tear down” and rebuild public housing developments. With crises plaguing the New York City Housing Authority (NYCHA) and many billions of dollars in infrastructure needs across its portfolio, Adams said the “only way to change the problem narrative is to think outside of the box.”

“We’re asking Office of Management and Budget (OMB) to do a real analysis of repairs and the cost of going in and doing these repairs,” he said. “We need to have a conversation: do we tear down NYCHA and rebuild it at the quality level it needs to be?”

“I say we must be committed to zero displacement: the current tenants are guaranteed to remain there,” he continued. “But there are old pipes, old roofs, and old wiring. What is it going to cost us to make NYCHA housing sustainable for the future?”

Adams is also critical of politicians who treat NYCHA like a pony show to garner media attention and boost voter confidence, making apparent reference to Governor Andrew Cuomo’s recent interest in public housing. Adams recently stepped further into the politics surrounding NYCHA by inviting Cuomo’s Democratic primary opponent in this year’s election to tour NYCHA with him -- an offer Cynthia Nixon quickly took him up on, touring Albany Houses in Crown Heights with the borough president.

Adams said the way some politicians treat NYCHA has created an “angry and distrustful” community of residents who are living in such impoverished conditions “they’ve given up.”

“Folks have finally discovered there is a NYCHA and they’re walking through it, I don’t know where they’ve been all these years, the NYCHA problem did not start now,” Adams said.

During the conversation with Gotham Gazette and City Limits, Adams also touched on other areas where he wants to usher in change.

A top priority for Adams is campaign finance reform, with the borough president saying the current system means candidates are spending more time in affluent areas, away from where they need to be.

“There is no reason we shouldn’t have a public-funded system,” he said. “People are not going to NYCHA or South Bronx or South Jamaica, Queens. They are going to affluent zip codes and focusing on finding donors in those areas.”

At the moment, the city’s public financing program matches contributions up to $175 from locals at a six-to-one rate, with several requisite thresholds. As Adams puts it: “If I live in an affluent area, I don’t care what amount you lower [the donation limit to] it’s easier for me to call a hundred friends and say, ‘Hey, on your way to The Hamptons can you get 1,000 of your friends to donate $175?’ I can’t call someone from the Pink House and say, ‘Hey, you’re on your way to Coney Island Beach, can you give $175?’ It’s not going to happen.”

“The number of calls you make to raise money is taking away from the quality time you should be spending doing your job,” he said. Adams wants a fully public system, whereby candidates don’t have to raise private money. He said that he wants an upcoming City Charter Revision Commission, on which he will have one of 15 appointees, to pursue such a change.

That commission -- organized through City Council legislation at the behest of Public Advocate James, Manhattan Borough President Gale Brewer, and City Council Speaker Corey Johnson (himself another possible 2021 mayoral candidate) -- will soon be formed, working toward proposals for the 2018 general election ballot. Mayor de Blasio has already formed his own Charter Revision Commission that just began its work, with a mandate to look closely at campaign finance reform.

His concern for public health is personal, too. Adams completely changed his lifestyle upon receiving a Type Two Diabetes diagnosis in 2016. By changing his diet to vegan and increasing his exercise regimen, Adams’ blood sugar levels had returned to normal six months on from the diagnosis and he says he completely reversed the disease.

“We are so dysfunctional as a city when you stop to think about it,” he said. “We have a schizophrenic healthcare philosophy. In one area we say that childhood obesity is an issue, asthma is an issue, yet we feed the children food that cause the diseases. There’s a disconnect.”

These are just a few of the issues that are central to Adams’ work now, and could be central to his mayoral campaign.

Yet before the 2021 city elections, there is the 2018 New York gubernatorial race and Adams is giving no indication of the candidate he’s planning to endorse in the Democratic primary, choosing between Cuomo, who he’s “disappointed in,” and Nixon (at least one other name is likely to be on the ballot, perennial candidate Randy Credico).

“I have not kept it a secret that I’m extremely disappointed in the treatment of Brooklyn in comparison to other boroughs, particularly the Bronx,” Adams said when asked about Cuomo, who has a long, close relationship with Diaz, Jr. “We’re looking at all the candidates to determine which way we’re going to go.”

“I think the primaries allow us to hear the voices of those who are running. It’s going to an exciting time,” Adams said. He also spoke about possibly backing Brooklyn City Council Member Jumaane Williams, who is running for Lieutenant Governor in the primary against incumbent Kathy Hochul and Adams knows well.

Also on the podcast, Adams spoke about plans for redevelopment in Brooklyn; his reaction to the April shooting of Brooklyn resident Saheed Vassell by police; the mayor’s recent budget proposal; and de Blasio’s record more broadly.

Listen to Eric Adams on the Max & Murphy podcast here, or find it wherever you get your podcasts.