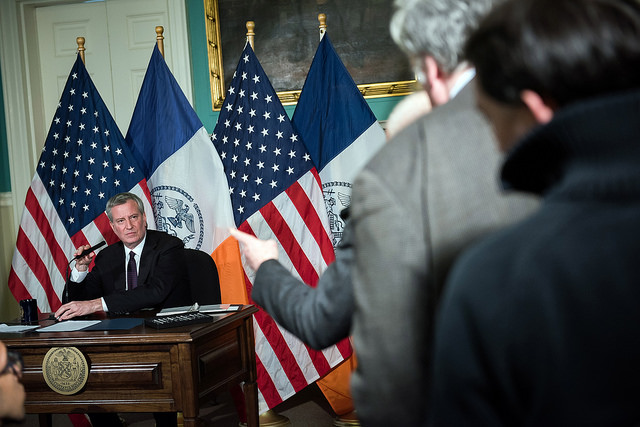 Created by the mayor to review the charter, which outlines the city’s foundational governance, the commission is holding a slew of hearings across the city to solicit public input on changes that New Yorkers want to see in the powers and role of the municipal government. Those proposed changes will eventually be included as referenda on the November election ballot. On Monday, over the course of three-and-a-half hours, about two dozen people testified before the commission on concerns both broad and parochial.

With the mayor having formed the commission with particular goals in mind -- improving voter participation and reducing the influence of money in elections -- it wasn’t surprising that campaign finance reform was a large focus of the hearing. Government reform groups urged the commissioners to consider a slew of changes, some controversial, and to further strengthen the city’s campaign finance system, which is considered a national model.

Among other things, Citizens Union, one of the groups, pushed for a top-two election system regardless of party, instant runoff voting, independent redistricting for City Council seats, and transferring oversight of lobbying disclosure from the City Clerk’s office to the Campaign Finance Board.

Another advocate, Jeremy Gruber, senior vice president of Open Primaries, as his organization’s name suggests, called on the commission to propose allowing all registered voters to cast a ballot in primary elections, which currently are limited to voters registered with a political party and exclude nearly a million independent voters. “Every New York City voter benefits from a healthier, more inclusive political system that encourages competition,” Gruber said, noting the chaos that accompanied the 2016 presidential primary in the state when hundreds of thousands of independent voters were incensed by being shut out of the Democratic primary between Bernie Sanders and Hillary Clinton.

Questions were raised about a few of those recommendations. Commissioner Larian Angelo expressed concern that a top-two election system, in which the top two vote-getters in a primary advance to the general election, might shut out Republicans in a Democrat-heavy city. And nonpartisan open primaries, Commission Chair Cesar Perales pointed out, had been put before the voters in a referendum years ago and was soundly rejected. “I’m playing the devil’s advocate here,” he conceded.

Gruber, though, insisted that the concept was “incredibly relevant” in the current political climate, with voters increasingly alienated from political parties and seeking to exercise their voting rights as independents.

Other ideas that found purchase among the audience and the commissioners were proposals to institutionalize participatory budgeting. Certain City Council members employ the program in their districts, allowing constituents to vote on how to direct $1 million or more in funding towards various programs and initiatives. Susan Lerner, executive director of Common Cause New York, said the program could be expanded citywide. She also said members of the Campaign Finance Board should no longer be solely appointed by the mayor, to increase ethics oversight of the agency.

Lerner, and others, also pushed for a move towards full public financing of elections, by first increasing the amount of funds that the CFB provides to candidates under it’s public matching funds system, which incentivizes small-dollar donations up to $175 by matching them at a 6-to-1 ratio. Those who testified included individuals who have unsuccessfully run for City Council in the past, and who said that the current system continues to favor candidates with access to wealthy donors and those with the resources to navigate the CFB’s at-times onerous regulations.

“Everyone deserves a fair and equal voice and now giving that opportunity of raising someone’s voice who is less fortunate can help ensure that their opinions and needs do not fade off into night behind those who can afford to raise their own,” said RJ DeMello, a community activist.

Another popular proposal, put forward by Brooklyn Council Member Brad Lander and supported by many of those who testified, involves creating a New York City Office of Civic Engagement, to encourage voter participation and local involvement in civic affairs. Amina Fofana, a member of Integrate NYC, a youth-led organization working towards school integration, said Lander’s civic engagement office was necessary so “youth can be able to voice their opinions and have a part in the decisions that are being made.”

Lander, who has introduced legislation to create the office, also spoke at Monday’s hearing. A nonpartisan, independent citywide Office of Civic Engagement could “truly empower people to engage in shaping their communities, which is really what democracy is supposed to be about,” he said. However, in his State of the City speech in February when he announced plans for his charter revision commission, de Blasio also said he was going to name a Chief Democracy Officer in the mayor’s office, though the scope of that position does not appear as wide-ranging as the office Lander is pushing for.

Several local residents at Monday’s hearing had narrower but substantive concerns about the functioning of community boards, the most localized iteration of municipal government. Some suggested that community board members should be elected rather than appointed, with term limits, and that borough presidents should be removed from the appointment process. “Community boards are their own political entity. Without term limits, their ability to represent constituents goes down,” said one resident and community organizer, Juan Restrepo.

Other suggestions included proportional representation from the population of the local district, a standard regulating structure for boards citywide, and a stronger role in local land use decisions.

Paula Segal, a senior staff attorney in the Equitable Neighborhoods practice at the Community Development Project, advocated for more equitable land use policies, noting that publicly owned land is leased out or sold without being subject to the city’s Uniform Land Use Review Procedure (ULURP). She pushed for improvements to ULURP and increased transparency in land use applications, and reforms to the tax lien process for charities and nonprofits. Segal’s boldest proposal was the “enshrinement of a right to housing” for the homeless, as opposed to the state law which provides for a right to shelter and creates what Segal called a “shelter industrial complex.”

There were also some speakers on tangential matters, who urged changes in voter registration and voting laws, which fall under the purview of the state Legislature and cannot be affected by revisions of the city charter. At least two people, including Republican congressional candidate Lutchi Gayot, said that Commissioner Una Clarke should recuse herself from the panel because her daughter, Congressional Rep. Yvette Clarke, is running for reelection and that posed a conflict of interest. Commission members had to repeatedly remind the audience that the commission’s work has no bearing on federal election regulations or practices. “[N]obody ever considered me a rubber stamp for anything,” Clarke retorted to one resident, noting that she and the other members of the commission are independent volunteers.

Yet others seemed slighted by how the commission was carrying out its work. Matt Fairley, who said he is a resident of Lander’s district, critiqued the commission for allowing representatives of established organizations to testify first, which “only increases the sense of alienation that voters in this city feel that people who are connected will be given primacy of place,” he said.

Fairley proposed a sweeping change in city government, insisting that New York City needs to increase the number of elected officials from the 64 that currently hold office across different levels. The idea found support from others as well, including Dr. John Flateau, a professor at Medgar Evers College who also serves as the Democratic Board of Elections commissioner from Brooklyn.

Flateau suggested that the City Council should have 59 seats, up from 51, to match the number of community boards. He had 21 proposals in total for the commission, though he was afforded only enough time to verbally advance a few, including granting legal permanent residents the right to vote in municipal elections, reviewing the composition of various city boards and commissions, and advice and consent powers for the City Council on mayoral appointments.

The Commission will hold its next hearing in Manhattan on Wednesday. An initial draft list of recommendations from the commission is expected in July.