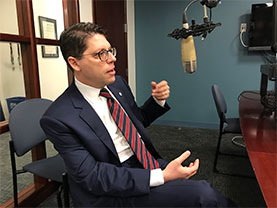 Department of Investigation Commissioner Mark Peters is one of the most feared officials in New York City. The power of his office has few limits as it investigates waste, fraud, and abuse in and around city government. DOI issues reports, makes arrests, and really gets under the hood of city agencies.

Under Peters, who took office in 2014, DOI has issued bombshell reports about the NYPD, NYCHA, the Department of Correction, and other city agencies and entities. Peters joined the podcast to discuss the work of the office, which has grown substantially during his tenure, his relationship with Mayor Bill de Blasio, who nominated him to the position but has criticized his work on several occasions, and more.