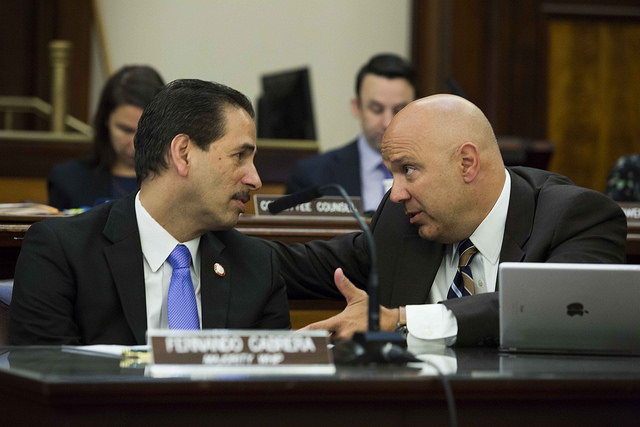 How does the New York City Council check city government agencies without legislating agency operations, which it sometimes does not have the power to do? Reporting bills.

The Council often passes legislation that requires an agency under the direction of the mayor to produce a report, like Local Law 47, which compels the NYPD to compile data on subway fare-beating arrests. This bill, and the NYPD’s response, quickly became another flash point in tensions between city agencies and the Council, which has mandated oversight responsibilities along with its legislative powers.

The intention behind the bulk of reporting bills -- which, like other legislation passed by the Council, are typically signed into law by the mayor -- is more transparency into agencies that then allows both the public and Council members additional insight into government function, effectiveness, and efficiency, and indications of operational or budgetary reforms that may be needed. But, reporting bills can also be onerous, requiring valuable resources at city agencies mandated to compile information, and there are questions about how often required reports are even produced or used by the Council.

Now, a new bill at the Council is aimed at bringing additional oversight and transparency to the totality of required reporting -- but that bill itself is the source of disagreement. A recent hearing on the bill, which is sponsored by City Council Member Fernando Cabrera and would add new requirements for an online database of all required reports, saw discussion of the bill as well as the practice of passing reporting bills. The bill would add new information about when reports are due and put public pressure on city agencies to produce required reports.

According to the listing for the bill on the Council website, the bill would require the city’s Department of Records and Information Services, “which is currently required to receive and post all reports required to be produced by local law or executive order on its website, to list all required reports, when they were last received and when they are next due.” It would also require DORIS to send a request “to any agency that does not transmit a required report, and would require the posting of such request on the website in lieu of the required report until such report is received.”

At the April 26 hearing, representatives of the mayor’s office and the Department of Records and Information Services (DORIS) testified in opposition to the bill, which also received a lukewarm public reception from some City Council members.

The bill currently has the sponsorship of only Council Member Cabrera, who chairs the Committee on Governmental Operations, which held the hearing, at which other Council members voiced concerns over the Council’s tendency to pass reporting laws and whether or not such laws do more to inundate agencies than substantially help the Council or the public.

If enacted, the bill -- known as Intro. 828 -- would enhance the DORIS-run digital database of reports required by local laws, executive orders, or mayoral directives. Currently, DORIS maintains the Government Publications Portal; however, the scope of this portal is limited by a mandatory keyword search engine as well as the fact that it lacks some of the most recent reports from city agencies. For example, the portal does not provide any reports from the Department of Information Technology and Telecommunications (DoITT) past the year 2014, despite reports being published as recently as this year.

Additionally, other recent reports by agencies such as the Department of Buildings, including those on gas utility risks or construction safety, or the Department of Criminal Justice, such as annual reports on jail population or crime rates, are similarly not accessible through the current portal.

DORIS and the Mayor’s Office of Operations cited unnecessary burden and premature planning as to why the bill should not be passed.

“With the continuous addition of legislated reports required of city agencies, we recognize the need to ensure strong administrative practices to support agency compliance,” said Emily Newman, the acting director of the Mayor’s Office of Operations, at the hearing last month. “However, we do not believe that Intro. 828 identifies the most effective approach and that it is not in the city’s best interest to mandate a new process in advance of any relevant recommendations of the Report and Advisory Board Review Commission.”

The Report and Advisory Board Review Commission, which reviews reporting requirements and assesses the usefulness of such reports, among other objectives, was set to reconvene this month. The last time the commission met was in 2012, despite the city charter mandating that it has annual public meetings.

“Intro. 828, as drafted, includes requirements that would be onerous for DORIS to undertake in real-time,” Pauline Toole, the DORIS commissioner, said at the City Council hearing. “Some agencies submit reports on a weekly basis, some monthly, some quarterly, and updating the list for each submission would require extensive resources and, ultimately, not provide the public with a worthwhile service.” Toole said DORIS currently updates the site on a “regular basis.”

Both Toole and Newman reaffirmed a desire to work on another possible solution in concert with the City Council in order to update the accessibility of all governmental reports online. Meanwhile, other concerns were additionally raised by Council members.

“I am as big on transparency as anything, but when we make demands out of agencies to do their jobs in other ways, I do worry that we are adding in so much onto them that is unfunded,” Council Member Keith Powers said at the hearing. “You know, we don’t fund new staff for that.”

Council Member Kalman Yeger also raised the concern of finances by considering what the potential savings would be if DORIS had a smaller annual quota for reports it must make available, which, according to Toole, currently stands at about 400 reports per year. “I’m curious to know how much we can save the taxpayers if we perhaps were to stop legislating the various agencies of this city to prepare information that is probably readily available by simply asking the agency to give the information out,” Yeger said at the hearing.

Alex Camarda, a senior policy advisor for Reinvent Albany, a government reform group focused on increased transparency, testified in support of the bill at the hearing – albeit, with some tweaks.

While the bill currently says that DORIS would send a letter of request of transmission to agencies ten days prior to a report’s deadline, and subsequently post that request on the website until the actual report is submitted, Camarda suggested that such a letter should be sent at the beginning of the fiscal year and that a seperate column listing all the agencies that did not yet transmit a report be created. Other proposed amendments to the bill include identifying which part of the charter administrative code requires the report as well as providing a brief summary of the report in the online database.

“We think government generally needs to move away from providing information that’s locked in static PDF reports and report data in an open, usable and dynamic form,” said Camarda.

Council Member Cabrera’s office did not respond to multiple requests to discuss the hearing and any modifications that he might consider making to the bill.