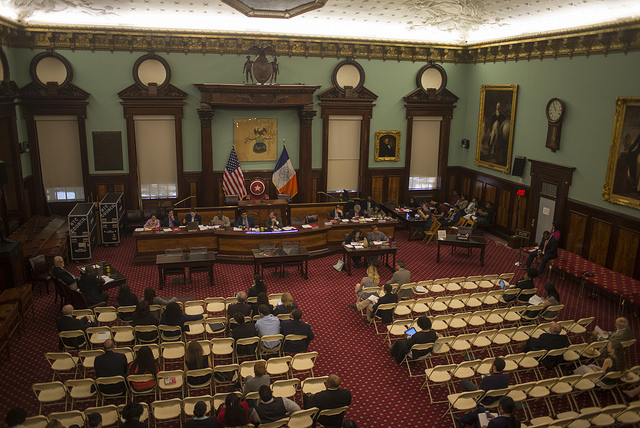 The New York City Council’s commission to review the city charter -- a separate effort from an existing commission created by Mayor Bill de Blasio -- has been fully appointed and is set to begin its work next Monday, July 16.

The City Council passed a bill in April, spearheaded by Public Advocate Letitia James, Manhattan Borough President Gale Brewer, and Council Speaker Corey Johnson, to create a commission to analyze the city’s governing document and recommend potentially significant changes to the structure and functions of city government. Although any such commission is allowed to consider the entire composition of the city charter, Brewer, James, and Johnson have pointed to a few broad priority areas including improving the city’s land use policies, strengthening the City Council’s ‘advise and consent’ role in approving mayoral appointees to city agencies and commissions, enhancing the Council’s power over city budgeting, and implementing stronger oversight of the mayoral administration.

At a March 17 hearing on the bill, James emphasized that the commission could achieve groundbreaking improvements similar to the 1989 charter commission that upended the entire structure of city government. She contrasted it with the mayor’s approach, which she said suffers from “predetermined conclusions, a narrow focus on issues within Council authority, and a timeline far too tight to do the job right.”

The Council’s commission, composed of 15 members, is meant to carry out its work over the next 16 months, presenting ballot referenda to voters during the November 2019 general election. The mayor’s commission, created by de Blasio through an executive order, has a shorter timeline and a narrower brief, and will be proposing its own recommendations on Election Day this year.

The Council commission’s members include four appointees of the speaker, including the chair, four mayoral appointees, and one each chosen by the public advocate, the comptroller, and the five borough presidents.

Johnson picked Gail Benjamin, the former director of the Council’s land use division, to serve as commission chair. His other appointees include Lilliam Barrios-Paoli, a former de Blasio deputy mayor and the former chair of NYC Health+Hospitals, the city’s municipal hospital system; Rev. Clinton Miller, pastor at Brown Memorial Baptist Church; and Merryl Tisch, the former chancellor of the state Board of Regents and current vice chair of the SUNY board of trustees.

“The appointment of these members of the Charter Revision Commission is the first step towards bringing the City Charter into the 21st century,” said Johnson in a statement announcing the full commission. “All of these individuals represent civic engagement at its best, and I am so grateful for the time they are giving to make our city a better place…The City Charter is in good hands.”

In a phone interview, Benjamin said she was "excited" about leading the commission. "This is kind of the culmination of my career as a government official,” she said. Benjamin drew a distinction between the work she will oversee and that of the mayor's commission, which is expected to release its preliminary report soon. “This commission has a much broader mandate than the mayor gave to his commission and I think that all of the 15 members who have been appointed are excited about the broadness of the mandate and the ability to really examine how this city functions governmentally and what we can do to move it into the future," she said.

Though the two commissions will not overlap substantially, Benjamin said the Council's commission will review the testimony presented to the mayor's commission, as well as the reports and testimony from every commission convened since 1989. "There are lots of issues that [the mayor's] commission, I don’t think, has had the time to really flesh out," she said, citing city procurement practices, non-citizen voting and instant run-off voting as a few examples. "I would think that we would want to look at those kinds of issues also and that we’ll have the time to do that because we’ve got over a year and not just a few months," Benjamin said.

Mayor de Blasio mostly plucked his Council commission appointees from his own administration. Among them are Lisette Camilo, the commissioner of the Department of Citywide Administrative Services; Paula Gavin, the city’s Chief Service Officer who heads up NYC Service, the agency tasked with promoting volunteering efforts; Lindsay Greene, a senior advisor to Deputy Mayor Alicia Glen; and former City Planning chief Carl Weisbrod, currently a de Blasio appointee to the MTA board.

Most other elected officials had already announced their selections to the commission or had quietly appointed members with little publicity.

In late May, Brooklyn Borough President Eric Adams chose former City Council Member and repeat mayoral contender Sal Albanese to represent him, citing Albanese’s outspoken positions on campaign finance reform. “I have called for, and am reiterating again now, for 100 percent publicly-financed campaigns where every candidate has an equal footing to express their ideas,” Adams had written in testimony at the March hearing before the Council’s Committee on Governmental Operations, which was considering the charter commission bill. “Fully publicly-financed elections will see more women running for office at a time when representation in the City Council has decreased since our last election. Fully publicly-financed campaigns have shown to increase minority participation in elected politics. A fully-funded system also takes away the quid pro quo corruption and will help restore faith in our electoral system.”

Albanese, in a statement accompanying his appointment, said, “Charter revision is an opportunity to make our government more democratic and responsive to its citizens.” During his 2017 primary challenge to de Blasio, Albanese’s top policy plank was the “democracy vouchers” program that would drastically reduce the influence of private money in municipal elections.

Last month, Bronx Borough President Ruben Diaz Jr. appointed former City Council Member James Vacca to the commission. “Jimmy has a wealth of experience in government and cares deeply about our borough and our city,” Diaz Jr. tweeted at the time.

More recently, Public Advocate Letitia James tapped Sateesh Nori, a Legal Aid Society attorney, as her representative on the commission. “Mr. Nori brings with him the wisdom and expertise necessary for the role, as well as a lifelong commitment to public service and to his City,” James said in a statement. Comptroller Scott Stringer’s pick was Alison Hirsh, the vice president of 32BJ SEIU, the prominent property services workers union.

Manhattan Borough President Gale Brewer chose her general counsel and director of land use, James Caras, to serve as her representative. “After three decades, it’s time for a thorough, expert review of how our City Charter is serving New Yorkers and how to make our government work better,” Brewer said in Monday’s announcement.

While the Council-created commission is about to begin its work and will take an extended timeline before its ballot proposals are announced next year, the mayoral charter revision commission is in the final two months before it makes its recommendations public by early September, in time to be included on the November ballot. That commission recently made clear its areas of focus -- voting and election reform, campaign finance reform, land use decision-making, community boards, civic engagement, and independent redistricting -- and held relevant expert hearings.