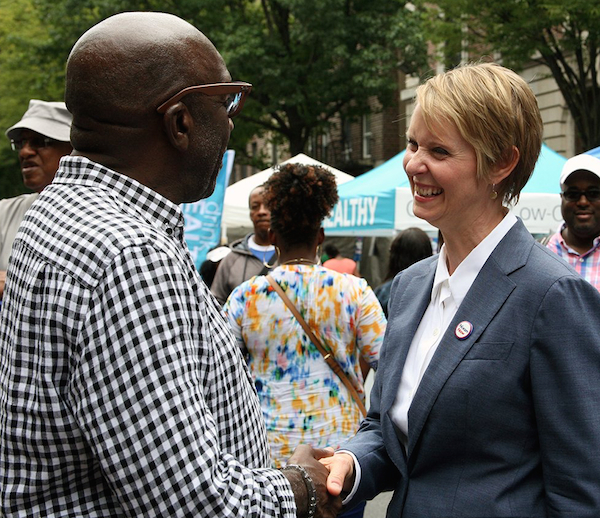 Cynthia Nixon, the actor and activist challenging Governor Andrew Cuomo in the Democratic primary for governor, laid out much of her campaign platform at a gubernatorial forum in Sunset Park on Tuesday, for which her opponent declined to participate. Over the course of nearly an hour, Nixon tore into the governor, insisted primary challenges are good for the party, and said she isn’t actively seeking the endorsement of New York City Mayor Bill de Blasio, a close ally for whom she has in the past campaigned and corralled celebrity support.

Nixon, who is running as an unabashed progressive and has even embraced the moniker of democratic socialist, initially stuck to her campaign stump speech, pitching herself as an outsider to the broken system in Albany who isn’t beholden to wealthy donors and special interests. That’s a charge she levels against the governor, whom she has criticized for failing to aggressively pursue progressive legislation over the last nearly eight years that he has been in office.

Though Nixon is a fairly well-known figure from her successful career and her first-time bid for office has garnered her national attention, she has appeared to struggle to overcome the immense advantages Cuomo enjoys through the powers of incumbency. His fundraising has eclipsed hers -- he has about $24 million in cash on hand while she has only about $440,000 -- and his poll numbers have been consistently higher.

Nixon acknowledged those weaknesses on Tuesday but maintained that she has a fighting chance. “I’m not saying it’s easy,” she said. “I’m not saying it’s not a narrow path but there is absolutely a path to victory...the polls are just not capturing who our progressive voters are.” She cited the immense energy around Vermont Senator Bernie Sanders’ presidential race, Zephyr Teachout’s strong showing in the 2014 Democratic gubernatorial primary against Cuomo, and the recent victory of Alexandria Ocasio-Cortez over ten-term Congressional Rep. Joe Crowley. She also noted hundreds of thousands of newly registered voters in New York, many of whom she believes will turn out to vote for her.

Though Nixon has received support for her race from several progressive grassroots organizations and Democratic elected officials, a glaring omission from the list is Mayor de Blasio, who has hemmed and hawed about weighing in on the governor’s race despite his close history with Nixon and his ongoing feud with Cuomo.

Nixon seemed to distance herself when asked if she’d sought the liberal mayor’s backing. “I’m not actively seeking his endorsement, no, I haven’t spoken to him about it,” she said. “I don’t feel that that’s what this campaign is about. I feel like this campaign is really about people who want progressive change, it’s really about speaking to voters about the issues that they care about and pointing out not only the corruption in Albany but Andrew Cuomo’s empowerment of the [Independent Democratic Conference] and all of the progressive legislative priorities that we haven’t moved on here.”

Pushed on why she isn’t asking for the support of the city’s top executive, Nixon said, “Nothing is holding me back...It’s really important for me to run as my own candidate and to understand that there are various politicians, including Bill de Blasio, that I have supported in the past but this is very much my own run.”

It wasn’t the only occasion where Nixon kept an arms length from the mayor. In her many pointed critiques of the governor throughout the forum, as Nixon criticized how state government had so often played politics with New York City, there was direct and tangential disapproval of the mayor’s own policies.

On education, Nixon insisted that mayoral control of New York City schools should be permanent with no strings attached by the state. She supported the mayor’s recent push to desegregate the city’s specialized high schools and endorsed legislation proposed by Assembly Member Charles Barron to reform admissions policies at those schools, which she called the “tip of the iceberg” of school segregation. She also urged de Blasio to follow through on that plan at the five out of eight specialized high schools where he does not need state approval to do so. “I think if he says he’s in support of Charles Barron’s plan, which he says he is, he should move on it right away. It’s in his backyard. If he has the power, he should enact it,” Nixon said.

Reiterating her call for increased taxes on higher earners, those making more than $300,000 per year, Nixon said Cuomo has “operated from a position of scarcity and falsely imposed austerity” to reward his wealthy donors even as the economy has grown in leaps and bounds since the 2008-09 recession. She denied the claim that higher taxes could lead to an exodus from the state, as critics have warned, arguing that people live where there are good services.

Nixon has said she would use the increased tax revenue generated by her policies to invest in infrastructure, chiefly the city’s subway system, public housing, and schools. Those investments, she said, would also create thousands of jobs. In particular, she pledged to invest in minority- and women-owned businesses, and said she would direct increased attention to the human services sector, which tends to heavily employ women and people of color. She said those overall investments would favor local economies across New York, particularly the struggling upstate municipalities that have been a target of Cuomo’s scandal-ridden economic development initiatives.

Nixon is also staunchly behind congestion pricing as a means to fund the Metropolitan Transportation Authority, which manages New York City’s subway and bus systems. If elected governor, she’d likely find herself isolated in holding that position. Mayor de Blasio, Assembly Speaker Carl Heastie, and state Senator Andrea Stewart-Cousins, who could be the next Senate majority leader, are all Democrats like Nixon but none have fully backed congestion pricing. Nixon said she would use her bully pulpit to raise the issue to a fever pitch. “If and when I get swept into office, it’ll be on a grassroots movement, a people-powered movement,” she said, “and one of the main things that I will be able to do as an Albany outsider is motivate public opinion and fight for this.”

She also took a shot at both the governor and the mayor over the state of the New York City Housing Authority, the public housing agency that houses nearly half a million New Yorkers, as she blamed the state, city, and federal governments for years of disinvestment. Asked about the mayor contemplating a shift towards 100 percent market-rate housing to be built on unused NYCHA land in order to raise much-needed revenue for fixing more than $30 billion in needs, she was stern and direct. “Market-rate on public housing land, I think, is a disaster,” she said. “We have an obligation to the people who live in public housing to repair their housing and not diminish it.” She acknowledged, however, that she does not have a plan to get to $30 billion for NYCHA, though she did say that she would look to put $1 billion a year of state money toward the authority and seek more federal funds.

Nixon also explained several rent regulations that she said the state needs to strengthen or pass to close loopholes that incentivize landlords to harass and evict tenants in order to increase rents.

The first-time candidate has proposed sweeping criminal justice reforms as part of her campaign and has been vocal about racial inequities in the system. When asked, she was critical of the role played by so-called broken windows policing -- a controversial practice of aggressive enforcement of low-level offenses in an effort to prevent larger crimes -- of which de Blasio is a proponent. Asked if she saw broken windows as the root of all problems, she said, “No, systemic racism is the root of the problem. But broken windows policing certainly has exacerbated the situation.” As they did on a number of occasions, members of the audience cheered her response -- several of the sponsoring groups have endorsed Nixon in the primary.

As an insurgent candidate, Nixon also pushed back against the argument that Democrats need to stop fighting among themselves when faced with the greater spectre of Republican control at the federal level and the presidency of Donald Trump. “I think primary challenges are a good thing,” she said, emphasizing that the leadership of the Democratic Party is now “much older, much whiter, much more male” than its progressive base.

Nixon closed on a positive note, stressing that the Democratic Party needs to give voters something to vote for, rather than just something to vote against, and implored those in the audience, whether in the room or watching a live-stream, to tangibly support her campaign, whether through money, canvassing, phone-banking, or other tasks. She said Cuomo has big money, but that she has the people.

“New York is the rightful seat of the resistance,” she said with a smirk, “and I’m frankly tired of California getting all the credit.”

The primary is on Thursday, September 13. Cuomo and Nixon are scheduled to hold a televised debate on Wednesday August 29 on CBS-2.