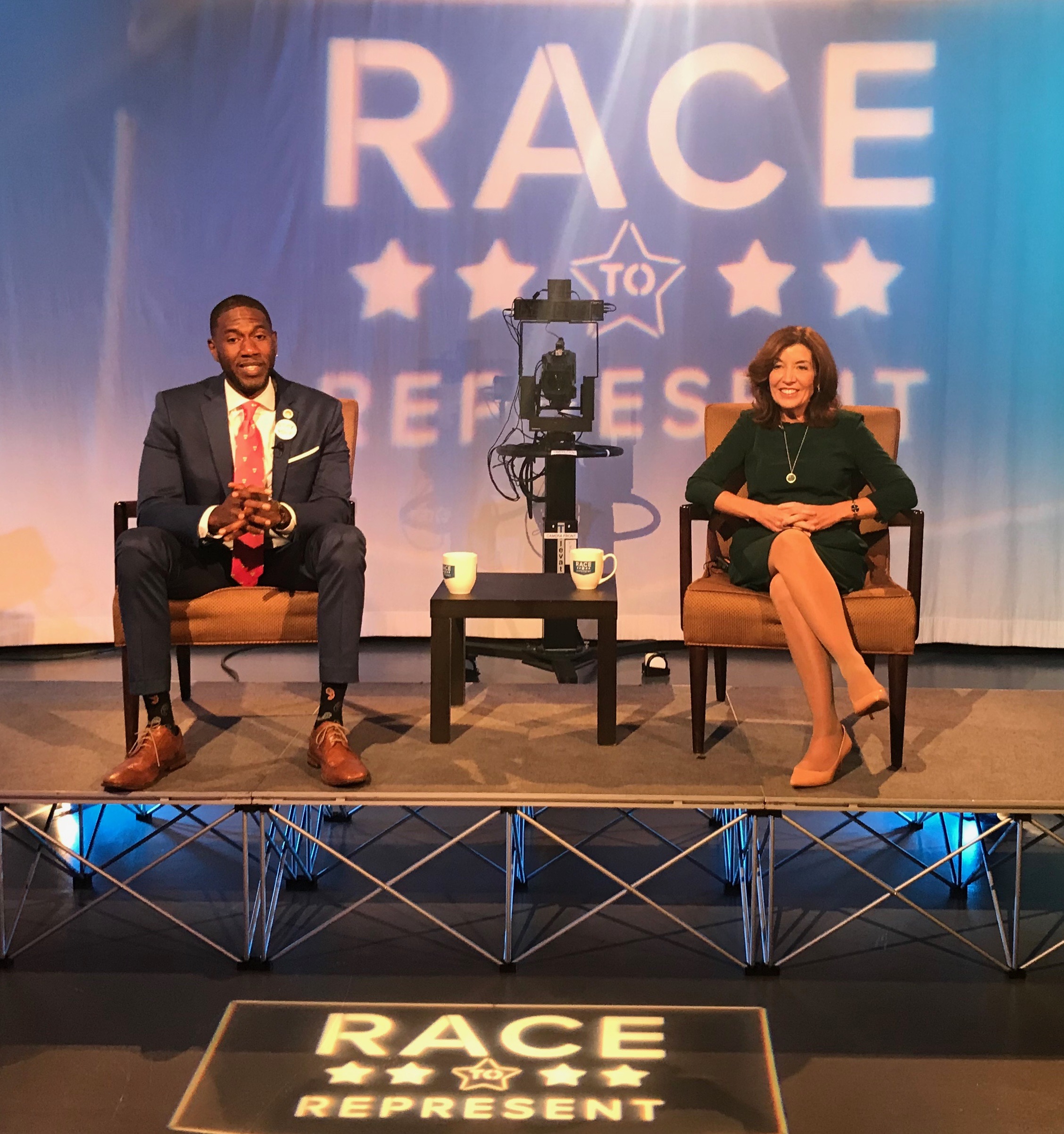 New York City Council Member Jumaane Williams on Wednesday pledged to remake the lieutenant governor position he is seeking, as Lieutenant Governor Kathy Hochul defended her record and approach to the job, as well as Governor Andrew Cuomo’s tenure. The two Democrats were appearing in their only scheduled televised debate ahead of the September 13 vote.

The 30-minute debate, hosted by Manhattan Neighborhood Network (MNN) and moderated by Gotham Gazette editor Ben Max, aired Thursday evening on MNN, while also being live-streamed on the MNN website and posted on YouTube.

The two candidates not only discussed their differing views of the position they are seeking to fill, but also corruption in state government during the Cuomo-Hochul administration, economic development and their respective records as elected officials. Williams repeatedly criticized Hochul and Cuomo, while the incumbent touted major accomplishments of the last four years and beyond, saying she is proud of her partnership with Cuomo and what they have achieved.

During the debate, Williams critiqued Hochul, previously a one-term member of Congress from the Buffalo area, as a political insider and tied her to broader qualms about “establishment Democrats” like he said she is, repeating the “any blue just won't do” slogan Williams has used on the campaign trail to signify that Democrats must elect candidates from the progressive wing of the party. But the debate largely centered on the approach a lieutenant governor ought to adopt, especially vis-à-vis the governor.

Williams, allied with fellow insurgent candidate Cynthia Nixon, who is challenging Cuomo from the left, said he holds a “fundamentally different vision” of the position than Hochul, lamenting the current iteration of the lieutenant governor job as one in which the official “does what the governor says to do.”

“I reject that,” he continued. “I believe the lieutenant governor should be the eyes, the ears, and the voice of the people of the state of New York.”

“The role of lieutenant governor is to be experienced and prepared to step in as governor should the need arise,” Hochul said in her first remarks of the debate, several times describing herself as a steady-handed leader who knows government and “gets things done.”

She also defended acting in lockstep with Cuomo, and wouldn’t — or couldn’t — name a time at which she had disagreed with him or changed his mind on a policy.

“This state is better served when you have the two executive officials, the governor and lieutenant governor, working in partnership,” she told reporters after the debate. She said during the debate and after it that she has had private conversations with the governor that she is keeping private, but that she is not afraid to speak up when she has something to say.

On a host of issues, Williams said Cuomo’s administration had mishandled policy while Hochul was missing in action. As in the past, he said that should he be elected governor, he’s play role akin to New York City's public advocate — a contrast to what Williams said has in recent years been purely ceremonial, giving Cuomo a “rubber stamp” on his agenda and traveling around the state cutting ribbons.

“When a ribbon is cut that means something good is happening,” Hochul said in response, going on to reference the act of opening up a drug treatment facility.

Hochul said lieutenant governors were meant to partner with the governor and the Legislature, not act as a thorn in their sides. And Hochul said she has not merely followed Cuomo’s orders during her tenure.

But when asked by the moderator for examples of changing the governor’s mind on an issue, Hochul did not cite any, saying her views have largely been in line with Cuomo’s.

During the debate the lieutenant governor highlighted accomplishments like a law that will raise the minimum wage to $15 per hour in many areas of the state and a paid family leave law, as well as efforts to create jobs, and to fight the opioid epidemic and sexual assault on college campuses. When Williams said that activists like himself had pushed Cuomo, Hochul, and others to the “Fight for $15” campaign, she countered that government is where things get done, and she’s proud of what has been passed, especially given Republican control of the state Senate.

Under Cuomo, Hochul’s portfolio has included high-profile economic development programs, some of which have been plagued by corruption. Williams made multiple references to these scandals, which have recently seen close allies and donors to the governor convicted of federal crimes.

“Too many of those have been actually massive failures," Williams said of economic development programs. "What's sad is the lieutenant governor's office hasn't been used to highlight that."

Hochul countered, including with reference to Buffalo, where the Cuomo administration has made its largest investments, some of which were taken advantage of.

“We've empowered the local people to chart their own vision…and it has been an overwhelming success,” Hochul said, in apparent reference to the Regional Economic Development Councils and other programs she has helped shepherd. “By any metric, Governor Cuomo’s economic development programs have been successful.”

She added that there have been measures put in place to prevent against corruption and cronyism in economic development initiatives. "We have zero tolerance for anyone who abuses the trust that they have been given," she said, though she did not express direct support for additional anti-corruption measures related to economic development for which watchdogs and some legislators have called, dismissing some as sought by Republican legislators who want to be able to hand out more pork spending to their districts.

Hochul, when asked by the moderator about her apparent lack of involvement as the governor negotiated new anti-sexual harassment policy with other male elected officials behind closed doors, said she did play a meaningful role as the state passed new laws. Those laws, included in the state budget agreement reached in March, passed amid criticism from survivors of workplace sexual harassment for not including women in the legislative process and a lack of public hearings.

“I was very involved in those conversations,” Hochul said. “I was there helping chart the course that the state ended up adopting.”

Williams was asked about promising to be a bold, tell-it-like-it-is lieutenant governor, yet abstaining on more than 200 votes in the City Council, not choosing to vote yes or no, despite no apparent conflicts of interest. He said that many had been land use decisions that he wanted to register his discomfort about while being “collegial” with his Council colleagues.

While neither candidate used as fodder certain high-profile, contentious campaign issues — such as Williams’ past personal financial troubles or prior stated personal opposition to abortion and same-sex marriage; Hochul’s role in thwarting an effort to give driver’s licenses to undocumented New Yorkers or past support from the National Rifle Association (NRA) — the debate did include litigation of recent campaign trail controversies, with Williams accusing Hochul’s campaign of employing racially insensitive and classist tropes about him and his past financial struggles, which have included a home foreclosure and failed restaurant.

In addition, Williams referred to former state Democratic Party chair Judith Hope, who in a fundraising email for Hochul labeled Williams a “young charismatic black man,” and the Hochul campaign’s advertisements that he said depicted him as an “angry black man.” Hochul denied her campaign played a part in writing the email and said she can’t control what supporters say.

Hochul also denied her campaign has made use of race and class to attack Williams. “I don’t believe there are [racial overtones]. I believe that we’re running our race that talks about our records and that is what I’m going to continue to do.”

In her closing statement, Hochul made the case the administration's accomplishments earned her a second term so that she and Cuomo can continue to serve as a “check” on President Donald Trump, and lead the “resistance” against him.

“I’m going to continue what I’ve done, helping elect Democrats to the New York State Senate, but also to Congress,” she said. “We, as New York State, have a special responsibility — a moral obligation — to stand up and fight back.”

For his part, Williams emphasized in closing that it was not only his race and ability to bring diversity to state government that made him worthy of voters’ support, but also the issues he would champion if elected and how he would approach the role of lieutenant governor.

"Identity politics is important,” he said. “But that cannot be the only thing. That's the gravy. We have to have a meal.”

Toward the end of his post-debate talk with reporters, Williams expressed willingness to participate in another televised debate ahead of the September 13 primary, and criticized Hochul for not agreeing to additional debates. Hochul, who on NY1 said she wanted to debate Williams on the network, backed out of that debate, leaving Williams with the alloted time to appear with anchor Errol Louis in a segment that aired last week.