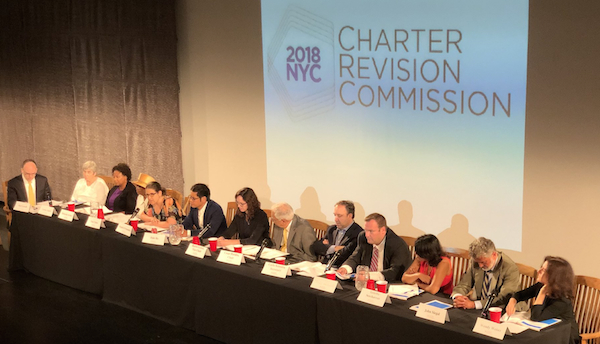 After months of meetings and deliberations, thousands of suggestions and dozens of hours of public hearings, the charter revision commission created by Mayor Bill de Blasio voted to put three broad questions on the ballot in November. If approved by voters, the proposals would significantly reduce campaign contribution limits in city elections, create a new agency to civically engage the public, and apply term limits and appointment reforms to community boards.

De Blasio created the commission to review the city charter with an eye on reducing the impact of wealthy donors and special interests in electoral campaigns and drawing more New Yorkers to participate in elections and civic life. The 13-member commission largely stuck by that mandate, though it did consider and reject other significant proposals including independent redistricting of City Council districts and instant runoff voting, also known as ranked choice voting, which the mayor does not support. (A separate City Council-created charter revision commission is also beginning public hearings this month and could possibly take up the issues left unresolved by the mayoral commission. It will recommend ballot questions in 2019.)

On Tuesday, the members of the mayoral commission met for the final time, at the New York Historical Society west of Central Park, to approve their final report and three “yes” or “no” questions that will be put to voters on the November 6 general election ballot.

“Our job was to try to figure out what could make our city more just, more fair and more democratic and then to put it on the ballot to see if New Yorkers wanted the city to be run in this new fashion,” said Cesar Perales, chair of the commission, on Tuesday. “That’s what we did. I think we did that well and it’s going to be up to the voters in November to determine whether or not these things would be better for our city.”

The first question proposes expansive reforms to the campaign finance law and the city’s public matching funds program, which incentivizes grassroots fundraising by matching the first $175 of every eligible campaign contribution at a 6-to-1 ratio for candidates who choose to participate in the program.

The proposal also increases the matching ratio to 8-to-1 for the first $250 raised by a citywide candidate and for the first $175 raised for all other seats. It would increase the cap on public funds disbursements from 55 percent to 75 percent of the spending limit for a seat, while also doling out the funds earlier in the election cycle.

There was some clear disagreement about how the new campaign finance rules would be applied. A majority of commissioners agreed that candidates should be able to choose to abide by the new rules for the next citywide primary in 2021, and that the rules would be mandatory thereafter.

Two of the commissioners, John Siegal and Wendy Weiser, disagreed with that implementation plan, though both voted to approve the question. “I do not think it is wise public policy to have a situation in which regulated parties get to make the decision as to whether they will or will not follow new regulations,” Siegal said. “I cannot think of another situation in which a regulatory agency has been put in that position. I do not think its necessary. I actually don’t think there’s any benefit to it.” He did, however, hold out hope that candidates would see the benefit of voluntarily participating, since the lower contribution limits would be accompanied by potentially more public funds.

“While I do share the concern about having a choice, I am heartened by the assurances that this is really unlikely to come to pass,” Weiser said, “that everyone is really likely to follow the new system. It is the one that makes much more sense.”

Carlo Scissura, the commission secretary, was the sole dissenting voice on the campaign finance question. He conceded that the commission published an “overall great report” but has in past hearings expressed doubts about increasing the taxpayer contribution by creating a larger public matching funds program. “I wish that on the campaign finance, that we took a little different approach but it does reflect the will of what we heard and the will of the majority of the commission,” he said.

The second question, which was unanimously approved, would create a new 15-member Civic Engagement Commission, with eight appointed by the mayor -- including the chair and executive director -- two by the City Council speaker and one each by the five borough presidents. The mayor would have to appoint at least one member from each of the city’s largest and second-largest political parties, which, likely in perpetuity, means Democrats and Republicans.

Among the roles the commission would play are administering a citywide participatory budgeting program starting in 2020 (it’s currently employed by City Council members in dozens of districts); providing interpreters at poll sites; working on civic engagement with advocacy groups and nonprofit service providers, with a particular eye on outreach to limited English-language speakers; and providing annual reports on progress on those fronts. The proposal also allows the mayor to delegate more powers and responsibilities to the commission.

The notion of an Office of Civic Engagement has recently been pushed forward by City Council Member Brad Lander, who has introduced legislation to create one. If approved, the charter revision creation of such a commission would appear to negate Lander’s legislation. The Brooklyn Council member testified to the commission about the idea of creating a civic engagement body and has held his legislation as the charter commission proceeded with its work.

The most controversial proposals the commission is putting on the November ballot deal with community boards, the most local form of city government. The third question would establish staggered term limits for community board members, to reduce mass simultaneous turnover. Those members appointed or reappointed on or after April 1, 2019, would be allowed to serve four consecutive two-year terms; those appointed on April 1, 2020 may serve five terms; and those appointed after that would again only serve four terms.

The commission also recommended changes to the appointment process, to make it consistent across the five boroughs and to promote diverse membership. The civic engagement commission, if passed, would also be tasked with providing technical assistance to community boards, particularly urban planning expertise and language access. Eleven commissioners voted in favor of the question, while Commissioner Angela Fernandez abstained from the vote.

The commission’s final report was also approved unanimously, and the questions will be delivered to the City Clerk to place on the ballot, giving the commission two months to educate and inform New Yorkers that they’ll be able to choose more than just candidates in November, when New Yorkers will be voting largely on state-level elected positions, including for Governor and members of the state Legislature.

“These reforms will go a long way toward strengthening our democracy and limiting the influence of big money in our elections,” Mayor de Blasio said in a statement. “There’s no doubt in my mind that these measures will help us build a more fair and equitable city.”