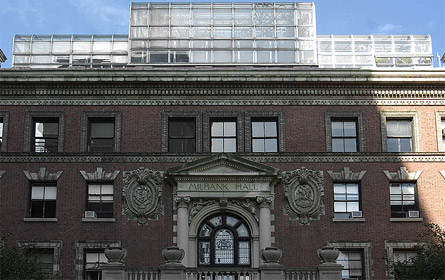 Photo by Timothy Vogel
Barnard College put a greenhouse on one of its campus buildings several years ago. A bill passed by City Council yesterday aims to encourage more rooftop greenhouses throughout the city

(For more on efforts to grow and process more food in New York, read Nevin Cohen's article on what a food policy for New York City should do and Julia Vitullo-Martin's look at the young entrepreneurs who are remaking food manufacturing in the city.)

The measures grow out of the FoodWorks New York initiative set out by City Council Speaker Christine Quinn earlier this year and which is, she said, offered the "first comprehensive ground to garbage can look at the city's food system." Manhattan Borough President Scott Stringer and, to a lesser extent Mayor Michael Bloomberg also have set out food policies. And the council's move comes as a growing number of establishments around the city sell and serve locally grown and made food.

Overall, Quinn said, the bills would increase information about food the city buys, support local farmers and reduce environmental costs associated with transporting food across the country, if not the world. Efforts by the city Department of Education to but more New York food, she said, have already determined that purchasing local food does not necessarily mean paying more for food.

According to Quinn, New York is the second largest institutional purchaser of food in the city, after the U.S. Defense Department. "We have a tremendous power," she said, "and now we're going to begin to embrace that power."

City Councilmember Gale Brewer, the sponsor of two of the bills, said a recent visit to local farms and producers convinced her local food could meet the demand from city agencies. "New York City and perhaps the region has enough food," she said. "What we need is the will to do it."

A key measure in the package â€“- Intro 452-A -- would amend the administrative code of the city to encourage the purchasing of food grown and processed in New York state. It would set up guidelines for city agencies, train agency personal, monitor the use of the guidelines and require an annual report to the speaker on the city's efforts to increase its use of Empire State food.

Two other bills seek to increase the amount of food produced within the five boroughs by creating more space to grow food.

One â€“- Intro 338-A, also proposed by Brewer -â€“ aims at making it easier to construct rooftop greenhouses in the city, by excluding any greenhouse that occupies less than a third of the roof area from height limits and from being considered an extra story.

This was the only one of the measures that faced any objections, provoking a no vote from Councilmember Lew Fidler who said he worried the measure might have unintended consequences. "The new scam in Brooklyn is to submit a plan for greenhouses when you're actually building an illegal unit," he said "I have difficulty approving something that is blatantly abused."

The other -â€“ Intro 248-A â€“- would require the Department of Citywide Administrative Services to create a searchable database of all city owned and leased property, with an eye toward determining whether the property is "being used to its fullest extent." If not, it could become a community garden or urban agriculture site.

In a prepared statement, Karen Washington, president of the New York Community Garden Coalition, praised the bill. "With the recent interest and surge in urban agriculture, we have been looking for more access to land," she said. "This bill will help identity land appropriate for urban farming as a means to growing food."

The council also voted to approve Intro 615 to require the administration to issue an annual report on the food system. It would report on 19 different metrics, such as the origin of food purchased by the Department of Education and efforts to make meals served in hospitals, senior centers and homeless shelters more nutritious. In a written statement, the bill's sponsor, Inez Dickens, said she hoped that the report would also "provide information to the City Council on the inclusion of the minority, small business farming community in the city's procurement process."

As part of its food fight, the council also took up the separate, but related issue of packaging. Intro 461-A, proposed by Councilmember Annabel Palma, requires the city to establish guidelines so it will purchase items with less packaging, or with packaging that can be reused or recycled.

A resolution calls on the state legislature to take similar steps.