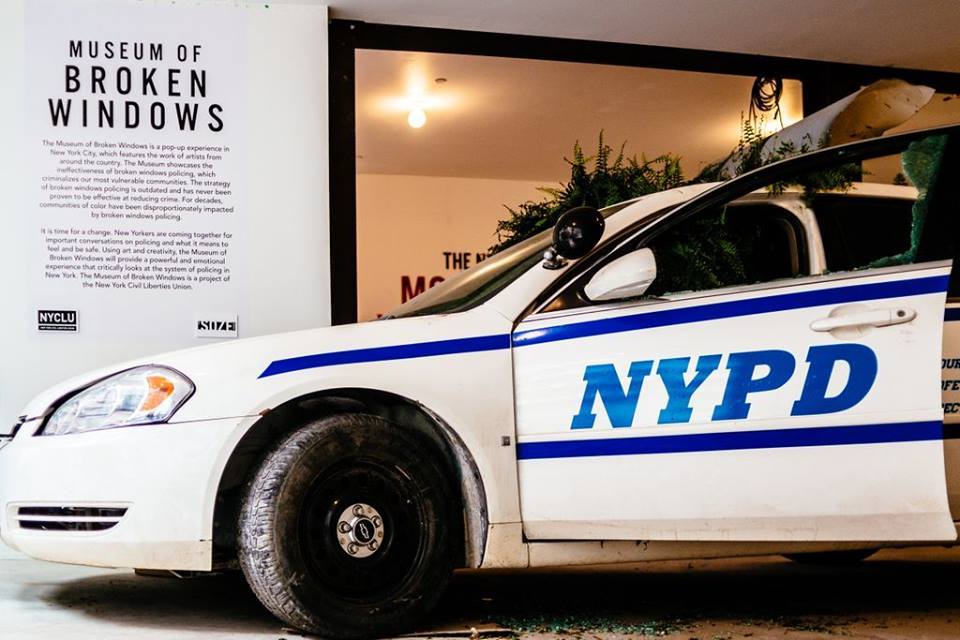 The windshield of the NYPD car is shattered, with glass debris all over the ground. The inside of the patrol vehicle is full of greenery, indicating it’s been there a while. Still intact is the side door that reads “Courtesy, Professionalism, Respect.”

This is the centerpiece of the Museum of Broken Windows, a new pop-up exhibit on West 8th Street hosted by the New York Civil Liberties Union (NYCLU) and open for one week beginning this past Saturday through Sunday, September 30. The museum, which features work by roughly 25 artists and will host several evening discussion events over the course of the week, “showcases the ineffectiveness of broken windows policing, which criminalizes our most vulnerable communities,” according to its website. “The strategy of broken windows policing is outdated and has never been proven to be effective at reducing crime,” it continues. “For decades, communities of color have been disproportionately impacted by broken windows policing.”

Artwork at the museum is by people who have felt the effects of broken windows policing, about topics ranging from police shootings of civilians to the use of stop-and-frisk to the War on Drugs. Forms include interactive pieces, photographs of significant historical civil rights events, and paintings. 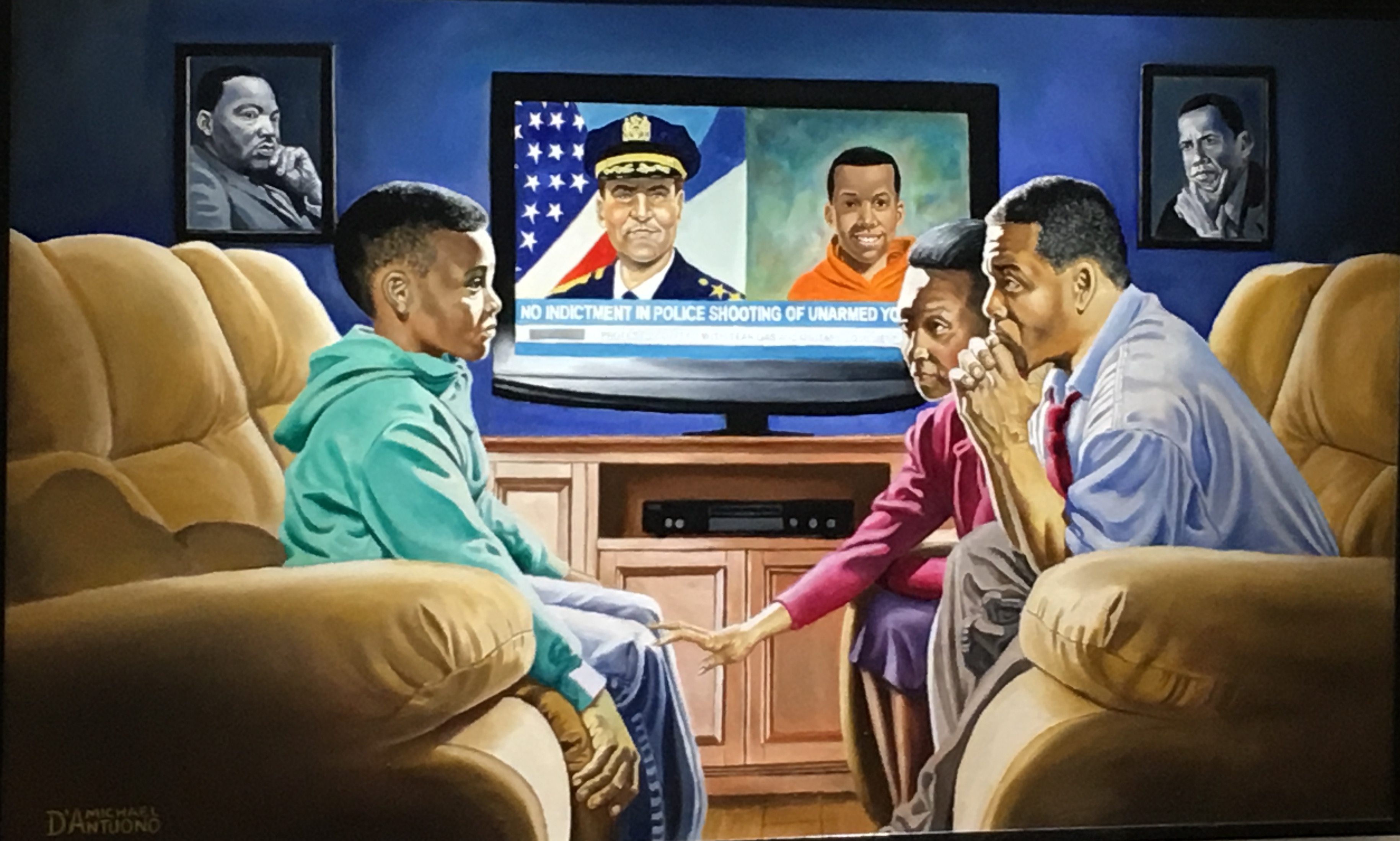 One piece, done by formerly-incarcerated Russell Craig, uses papers the artist received throughout his seven-year journey throughout the criminal justice system — halfway house notes, bail receipts, processing papers — to create his own self portrait. By painting his portrait onto these papers, Craig says that he is sending a message that the system that tried to define him did not succeed in doing so.

The layout of the museum starts with a small hallway containing art on either side, eventually leading to a wider space. This is where the NYCLU will host discussion events on broken windows, police accountability, and the “school to prison pipeline.” Throughout the exhibit, interactive prompts encourage visitors to think about and answer questions while consuming the art on display.

The NYCLU has long-decried the policing approach made popular in New York City in the 1990s by former two-time police commissioner Bill Bratton, which is centered on strict enforcement of low-level crimes such as turnstile jumping or drinking alcohol in public in the belief that such law-breaking and “disorder” erodes quality of life and leads to more serious and violent crimes.

Bratton first began implementing the strategy, which focuses on prevention of as opposed to only reaction to major crimes, under Republican Mayor Rudy Giuliani. It remained in place in the city as Bratton moved elsewhere, only to resume his NYPD command in 2014 under Mayor Bill de Blasio, a Democrat who has repeatedly called broken windows policing “the right approach.”

Though its effectiveness has been extolled regularly by some and questioned repeatedly by others, namely around causation between its use and the drop in major crimes that has occurred over decades, but also in terms of the racial disparities in enforcement, it has remained the guiding NYPD strategy. Implementation has changed over time and the city has in recent years under de Blasio, Bratton, and Bratton’s successor, Commissioner James O’Neill, significantly reduced arrests for low-level crimes, though racial disparities persist. Legislation pushed by former City Council Speaker Melissa Mark-Viverito created a framework for enforcing low-level offenses as civil, not criminal, violations. Bratton has called the relaxing of some aspects of broken windows a “peace dividend” possible due to the dropping numbers of major crimes like murder. He has compared the use of stricter enforcement to medicine given by a doctor to a very sick patient.

Activists and advocates like those at the NYCLU have seen things very differently. “People of color report being surveilled, harassed, abused and punished by police all over New York City,” the NYCLU reports in its most recent survey. “This is felt most intensely in particular neighborhoods, most of which are home to disproportionate numbers of black New Yorkers.”

“It is time for a change,” the new pop-up museum’s website states. “New Yorkers are coming together for important conversations on policing and what it means to feel and be safe. Using art and creativity, the Museum of Broken Windows will provide a powerful and emotional experience that critically looks at the system of policing in New York.”

Donna Lieberman, executive director of the NYCLU, described the principles of broken windows theory as a being instrumental in the creation of policies that began the War on Drugs and increased police presence in schools.

“The ideology of broken windows policing quite logically and devastatingly morphed into the school-to-prison pipeline,” Lieberman said. “It went hand-in-hand with a dramatic increase in suspensions, kicking kids out of school instead of helping them figure out how to solve problems related to this behavior.”

Proponents of broken windows often cite the steady decrease in serious crime rates New York City has seen over the years as evidence that it is working, but the NYCLU claims that these crime rates, and their drops, have been the same in areas where broken windows policing is really employed, namely communities of color, and in areas where it is not.

“It’s 16 for 100,000 and 18 for 100,000,” said Johanna Miller, advocacy director of the NYCLU. “So rates of serious crime are exactly the same if there’s broken windows policing happening or not happening. Which for us is evidence that even if there was more urgent crime-fighting strategy in the 90s, that doesn’t exist anymore, we’re living in a different New York.”

In addition to ending broken windows policing, the NYCLU is pressing for the passage of the Police-STAT Act, which would override section 50-a of the New York State Civil Rights Law and allow public release of police personnel records. Though Mayor de Blasio has been outspoken about his belief that it is problematic, he has supported the NYPD’s relatively recent change to adhering to it, which errs to the side of secrecy. De Blasio and NYPD officials have said they have no choice and want to see a state law change, though the department had revealed much more information for many years, a court decision resulting from a suit by the NYCLU has allowed to the city to shield the records.

In 2016, the NYCLU brought a suit against the city after its Freedom of Information Act request for 10 years of NYPD personnel records had been denied. In the past, the redaction process offered by the FOIA was seen as enough to allow the city to balance an officer’s privacy and a citizen’s right to information. This may be why a lower court ruled in favor of the NYCLU, a decision that was overturned by the First Judicial Department appeals court. Ruling that the request would pose a violation of section 50-a, a precedent was set. 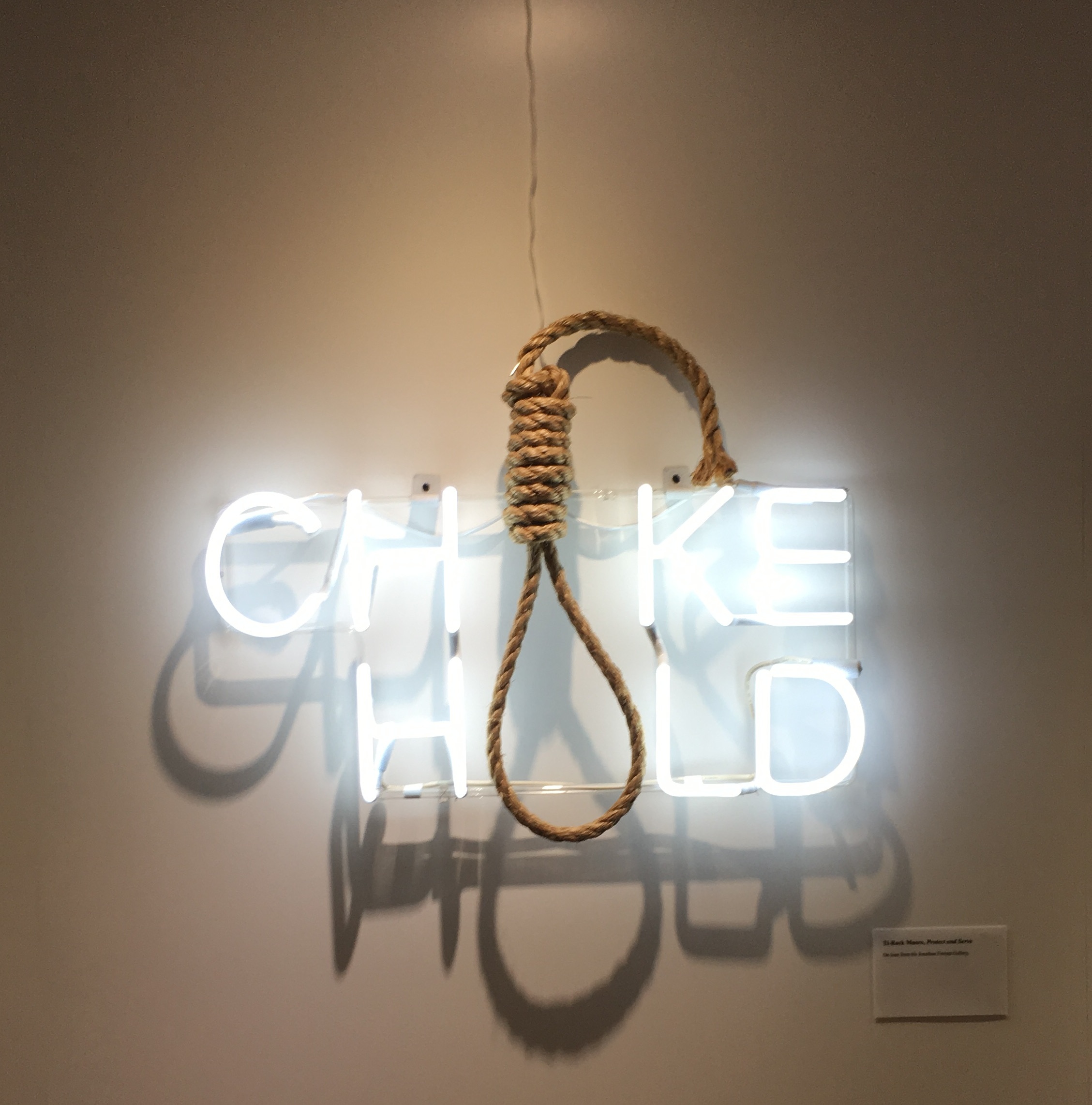 The Museum of Broken Windows may help move public sentiment behind what the NYCLU is advocating. Daveen Trentman, co-founder of the Soze Agency and executive producer of the museum, hopes the art will compel New Yorkers to rally to their side.

“What the art can do is open our hearts, make us think more compassionately, and really draw a connection to the statistics and to the policy,” Trentman said.

Using artists who have gone through the criminal justice system, the museum is designed to help others empathize with the cause and be spurred to action.

“[The artists] are experts of their own experience, and that makes their work tremendously authentic,” Trentman said, going on to emphasize that she sees the work as saying, “We’re not hopeless. We aren’t stuck in this set of policies and we don’t have to accept it. What we can do is end broken windows policing.”

“Ultimately, whether or not the NYPD continues on the path of broken windows policing is up to the mayor,” said Miller. “Our mayor has done so much great work to end stop-and-frisk, to change police practices and to invest in neighborhood policing, but he continues to say publicly that he believes in and adheres to the principles of broken windows. It’s time to let that go.”

The mayor’s press office declined to comment for this story.