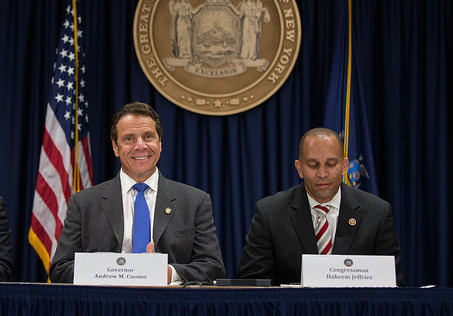 Before Amazon announced the placement of one of its next satellite “headquarters” in Queens, drawing mixed reactions from local lawmakers and significant overall pushback, the company’s campaign finance footprint in New York shows it was spreading its money around to many New York politicians, mostly those at the federal level.

Eight members of the U.S. House of Representatives from New York City, all Democrats, who signed a now infamous letter last year to compel Amazon to consider the city, received more than $26,000 in total campaign contributions from Amazon from the beginning of 2017 to October 2018, according to Federal Election Commission (FEC) filings, with four of the members receiving $7,500 of that total before signing the letter.

Rep. Hakeem Jeffries, whose district includes part of Queens, received $8,000 total from Amazon in four separate contributions to his campaign since 2017, including $1,500 before he had signed the letter and $6,500 afterward, a time period that coincided with Jeffries’ recent reelection to the House, though he did not face serious opposition. Jeffries’ office did not respond to a request for comment for this story, but he said in a statement to Cheddar that the deal “will supercharge New York City’s reputation as the single best place to do business in America.”

Brooklyn Rep. Yvette Clarke received $5,000 from Amazon, half before signing the letter and half since -- Clarke did face a tough primary challenge this year, narrowly defeating Adem Bunkeddeko before cruising to victory in the general. In a statement for the city’s Economic Development Corporation (EDC) that was sent to members of the media upon the Amazon announcement, Clarke said, “Amazon’s decision to locate a headquarters in New York City is a testament to the strength of our technology sector.”

Other letter signees who received Amazon contributions include Rep. Eliot Engel, Rep. Carolyn Maloney (whose district includes Long Island City), Rep. Gregory Meeks, Rep. Nydia Velazquez, and Rep. Adriano Espaillat, all of the five boroughs. Maloney called for a fair “public review” of the deal in a statement to Politico, arguing that “[a] beneficial deal will withstand public scrutiny.”

Upon the announcement of the deal to bring Amazon to New York City, Espaillat issued a statement of praise, saying in a tweet, “Welcome to New York City, @Amazon. We have the best & brightest technologically skilled workforce that is ready & willing to work & invest in our community & help our economy continue to grow,” while Velazquez issued a statement criticizing the process and outcome, saying, “Many New Yorkers, myself included, are concerned by the enormous incentives this package extends to Amazon.”

Rep. Joe Crowley of the Bronx and Queens received $2,500 from Amazon before he signed the letter, according to FEC filings. He lost his seat in an upset to now Congressional Representative-elect Alexandria Ocasio-Cortez, who has been a strident critic of the Amazon deal. The democratic-socialist tweeted that she finds the deal “extremely concerning,” arguing that the money for tax breaks for Amazon could be better spent on the “crumbling” subway and disenfranchised communities.

It’s unclear if any of the members of Congress played a role in the negotiation process, which was apparently led by Cuomo, along with de Blasio and members of their two teams -- those involved apparently signed non-disclosure agreements at Amazon’s insistence. Members of Congress’ support or opposition, however, can play a crucial role in the overall atmosphere around such a deal and the public perception thereof. For the most part, Amazon is more concerned with federal regulations and nationwide tax policy, evident from its campaign funding patterns. Data from OpenSecrets.org shows that Amazon gave about $1.17 million to federal candidate campaigns in 2018 alone, 52% of which went to Republicans and 48% to Democrats.

Amazon has also given some campaign contributions at the local level, including $1,000 to Assembly Speaker Carl Heastie’s campaign committee in January of this year, according to state election records. Heastie did not respond to a request for comment, but the Bronx Democrat told the New York Times in a statement that “this deal has the potential to more than pay for itself.” He added that, “Of course we take our role in approving aspects of this deal very seriously and we will be closely reviewing it.”

The only other local lawmaker whose campaign funds Amazon added to was Republican state Senate Majority Leader John Flanagan, who received $1,000 in January, according to state election records.

New York City and State have agreed to roughly $3 billion in financial incentives to Amazon to settle in Long Island City, including tax breaks and rebates mostly from existing economic development programs that would be applicable to other companies, as well as a roughly $500 million capital grant from the state that is discretionary. The deal is based on a pledge by Amazon to create 25,000 new jobs in the city over 10 years, at an average salary of $150,000 per year. Some of the incentives are directly tied to those jobs coming to fruition. The company may also qualify for new federal tax savings.

Critics have cried foul about a secretive process with virtually no public input before a deal was struck (there will be some before everything is finalized) and that there are billions of dollars of incentives going to one of the wealthiest companies in the world. A number of elected officials did praise the deal, including U.S. Senator Charles Schumer of New York, the Democratic Senate minority leader. Schumer received a total of $10,000 from Amazon in three separate contributions to his campaign committee in 2015 ahead of his reelection the following year, according to FEC filings. He has not received any funds from Amazon since his 2016 reelection.

Some of the criticism towards the Amazon deal is tied more broadly to Cuomo’s economic development programs and their incentives for companies to relocate or create jobs. Flanagan, whose 2018 campaign got the relatively minor boost from Amazon, criticized Cuomo for giving handouts rather than working to improve New York’s overall economic climate. Flanagan’s majority conference, which is handing over the reins next year to Democrats who flipped the chamber on Election Day, has signed off on budgets that have included Cuomo’s programs.

Amazon, a trillion dollar-company, spent $110,000 lobbying the state Assembly, Senate, and executive branch on bills related to taxation and regulation of internet companies from the beginning of 2017 to October of 2018, according to state lobbying records. JCOPE (the Joint Commission on Public Ethics) lists Amazon lobbying activities as only related to “internet/online sales & related issues,” but specific bills lobbied on include the establishment of a task force to study an internet marketplace tax and bills that propose to regulate voice-recognition technology.

The company also spent over $120,000 lobbying New York City government in the last two years for participation in their cloud computing services, according to city lobbying records.

The records do not show lobbying related to the new headquarters in Queens. That process appears to have been removed from official lobbying and instead part of the competition Amazon announced, wherein it received hundreds of pitches from governments and coalitions around the country. There are no records of Amazon donating to the campaigns of either Cuomo or de Blasio.

Jeff Bezos, Amazon CEO and one of the wealthiest people in the world, said in a statement on the day of the announcement that the new “headquarters” split between New York and Virginia “will allow us to attract world-class talent that will help us to continue inventing for customers for years to come. The team did a great job selecting these sites, and we look forward to becoming an even bigger part of these communities.”

Hiring for the new offices is scheduled to begin in 2019, according to Amazon. Governor Cuomo has said that the new office campus and related employment will generate more than $27 billion in tax revenue over the next 25 years.