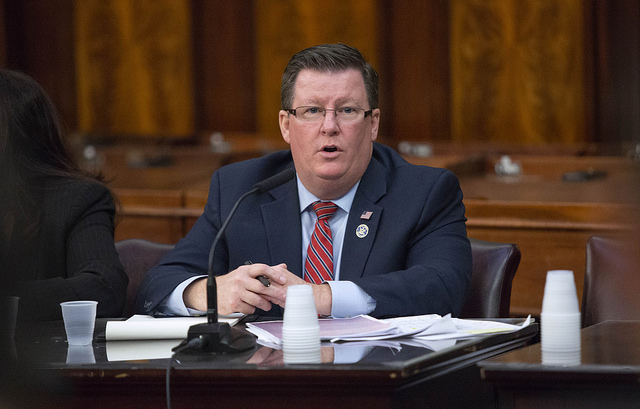 Embattled City Board of Elections Executive Director Michael Ryan testified before the City Council's Committees on Oversight and Government Operations on Tuesday, explaining that a perforated two-page ballot, never before used anywhere in the United States, was primarily to blame for the issues at polling sites across the city on Election Day.

In a combative hearing initially presided over by City Council Speaker Corey Johnson, Ryan apologized, after being asked to do so, for the poor administration of the general election but defended the BOE by noting it was forced to work under tight timelines and restrictive administrative law, which required the center perforation on the two-page ballot and did not allow ballot questions, of which there were three this year proposed by the mayor’s Charter Revision Commission, to appear on the same side as candidates.

“The board has been advised that an initial analysis points to the perforated ballot requirement as the major cause of the increased ballot jams,” Ryan said in prepared testimony to the joint committees. “Such a ballot configuration has not been attempted in any jurisdiction in the United States for use with a poll site scanner. The perforated two page ballot presented a series of problems never before experienced by the Board or anywhere in the country.”

These problems included malfunctioning scanners without adequate tech support to fix them and lines so long that some voters simply went home without casting a ballot.

The timing of the submission of the ballot questions proposed by the Charter Revision Commission caused the ballot to not be finalized until October 9, and the hundreds of different "ballot styles" across various different overlapping jurisdictions for different offices, prevented adequate testing and the ability to upload different styles on the same machine, Ryan said.

In Manhattan alone, there were 924 different ballot styles, Ryan testified, owing to the various different combinations of overlapping districts for different offices such as Senate, Assembly, and Judgeships, among others.

Staten Island was the lone borough with a single sheet ballot, and did not experience the poll site issues that the other four boroughs did on Election Day.

Because of both the abnormally high turnout and the two-page ballot, which when separated doubled the amount of paper that machines needed to process, “ballot bins” in the voting machines filled up much quicker than normally. In fact, most of the issues were related to simple overcapacity of ballots in the bins, rather than technical malfunction, Ryan said.

Ryan noted that about 4,000 scanners were in use on Election Day, while about 1,000 were left in the warehouse; they could not be brought out to poll sites due to transportation issues and the fact that individual ballot styles take an hour to upload onto the machine’s ballot reading software.

Ryan said that a two-page ballot was considered a possibility in 2016, but was ultimately not used. Nonetheless, Ryan was criticized for not testing a "generic" perforated ballot in that two-year span.

In fact, Ryan said that the Board did not test for potential malfunctions at all, citing a lack of adequate time between the ballot finalization and Election Day and the inability to predict voter behavior.

“We had just enough time to test the DS200 scanners for functionality,” he said, referring to the scanners that the state has used since switching from lever voting in 2010. “We did not have any time to do any kind of random testing to try to replicate the voter experience.”

Speaker Johnson, who called on Ryan to resign during the Election Day fiasco, expressed displeasure and distrust in Ryan but also condemned the election process in New York generally.

“I am embarrassed as a New Yorker about what happened on Election Day,” Johnson said. “I feel like this happens over and over and over again. I can’t remember an election where people said ‘you know what, it was done in a thoughtful, calm, professional, easy manner.’ New Yorkers deserve that. I don’t have confidence that that is gonna happen.” Johnson noted that he is not confident that the Board can competently administer the upcoming special election for Public Advocate, likely to occur in February.

Johnson was just one of several Council members to detail his own experience voting, noting that his polling place had only a single functioning scanner by 11 a.m., resulting in a significant line that stretched outside into the rain, which was another factor in the day’s issues.

Another problem beyond ballot design and machine capacity was staffing, which failed on multiple levels on Election Day, ranging from poll workers unable to handle the influx of voters or scanner malfunctions or a greatly deficient number of tech support workers to fix the mounting issues with the machines. The BOE supplied tech staff commensurate with the number staffed in the 2016 presidential election, which Ryan called a bad idea in retrospect.

"There was an avalanche early in the morning and we just could never catch up,” he said.

Ryan disclosed that the BOE had received nearly 10,000 calls on Election Day, with most related to technical issues, a number he said was much higher than previous elections.

The problem was most significant in Brooklyn, where the Board fielded 3,362 calls and wait times for a technician averaged an hour and 15 minutes. The average wait time citywide was 52 minutes.

Ryan, who is hired by the city BOE to run operations and be non-political, did not take an explicit position on some of the more talked-about election reform proposals for the state, such as early voting, no-excuse absentee voting, or automatic voter registration. However, he urged Council members on multiple occasions to work with the Board to establish a municipal poll-worker program modeled on a similar program in Los Angeles, where municipal workers at city agencies would get a bonus or a day off to work the polls. This could include techs from the city’s technology department, DoITT, or other agencies, who could supplement the existing tech support workers.

In the meantime, however, Ryan wants to staff poll sites in future elections with workers trained to fix malfunctions, rather than relying on a finite number of outside techs.

Brooklyn Council Member Kalman Yeger questioned why the existing poll workers themselves couldn’t be trained to clear ballot jams, comparing the issue to a printer malfunction.

"You make a straightforward and reasonable suggestion. The reluctance going back to 2010 was that we were losing poll workers because of their fear of the new machines,” Ryan said. “So a decision was made in that moment, which carried through to this election, have the poll workers do less with the machines, not more. This election, in a very hard way, taught us a difficult lesson."

Other testifiers, such as Douglas Kellner of the State Board of Elections, agreed with the municipal poll worker suggestion, while also suggesting that staffing in general needed to be improved to comply with the “30-minute rule,” a federal rule which stipulates that no voter should wait more than 30 minutes to vote.

“New York City has not complied with this regulation in its presidential general elections since the regulation was adopted in 2007,” Kellner said. “And I see no meaningful efforts by New York City to come into compliance in 2020.”