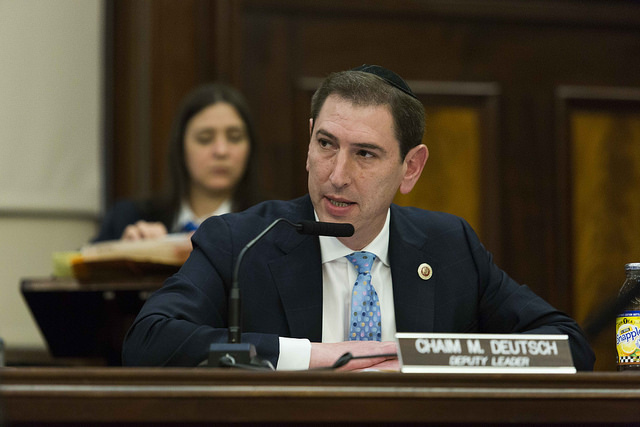 A bill that would require the New York City Department of Veterans Services to help veterans discharged from the military solely for their LGBTQ status to upgrade or change the narrative of their discharge status and “extend all city benefits and services” to them was introduced to the City Council’s Committee on Veterans at a hearing on Monday.

Introduced alongside it was a bill that would require DVS to create a unit to assist veterans with discharge characterization upgrades and offer legal advice for those pursuing meritorious appeals. Almost all of the activists, city officials, and other members of the veterans community who attended the meeting supported the sentiment of the bills — but almost none of them supported them as written.

Other than retiring, most people leave military service through the discharge process. When a veteran is first discharged, they can be given one of five statuses: honorable, general, other than honorable, bad conduct, and dishonorable. Discharge status is given at the discretion of the commanding officer. A less than honorable discharge, often referred to as a ‘bad paper discharge,’ can be given for any number of reasons — including being injured or ill — and results in a veteran being disqualified for certain federal Veterans Affairs benefits.

President of the American Veterans for Equal Rights’ New York Chapter Denny Meyer stated in his testimony that between World War II and the era of “Don’t Ask, Don’t Tell,” 100,000 LGBTQ American soldiers were less than honorably discharged for being gay. During the “Don’t Ask, Don’t Tell” era, another 14,000 were involuntarily discharged for the same reason, and although most of these veterans received honorable discharge paperwork, the narrative of the paperwork listed their homosexuality as the reason for being discharged.

The bill related to LGBTQ discharge and reparations, Intro. 479, was proposed by Council Member Daniel Dromm, a Democrat from Queens and chair of the Council’s LGBT Caucus. The bill would seek to address discriminatory practices by requiring the city’s DVS to offer assistance to those less than honorably discharged solely for their sexual orientation or gender identity in upgrading their status or changing the narrative of that discharge.

This effort complements Intro. 1218, a bill sponsored by Council Member Chaim Deutsch, the chair of the Council’s veterans services committee, which would require DVS to create a unit with the sole purpose of giving legal advice to any veteran seeking discharge upgrades.
Deutsch did not chair the hearing on the bills, despite not only being the committee chair but also having one of his own bills on the docket. A conservative Democrat from Brooklyn, Deutsch did not provide an on-the-record explanation of his absence from the hearing despite repeated inquiries by Gotham Gazette. The City Council speaker’s office did not provide comment for this article when asked. Council Member Dromm’s spokesperson did not respond to a request for comment about Deutsch’s absence. It is rare that a Council committee will hold a hearing without the chair.

Testimony on the two bills was first given by DVS Commissioner Loree Sutton, who in part responded to Dromm’s discussion of his bill.

During the testimony, Sutton brought up two major issues with the bills that would be echoed throughout the hearing by advocates.

First, although the language of Dromm’s Intro. 479 implies that some city benefits depend on discharge status, this is not the case, according to Sutton.

“Discharge status and LGBTQ status are not identifiers used to screen out applicants for city resources,” Sutton said.

The bill states: “A veteran with any discharge status less than honorable, for example, cannot access the full range of benefits offered by the VA and, often, are denied benefits by the state and local veterans affairs bodies as well.”

Dromm said that part of the intention of the bill was to codify LGBTQ veterans’ rights into law. Mentioning how the Trump administration has set back LGBTQ rights, he said that this bill would prevent a similar occurrence at the city level.

“One of the reasons why we put this legislation forward is because while we recognize Mayor de Blasio's commitment to LGBT rights and [Sutton’s] personal involvement in it as well, we don’t know what the next mayor’s going to bring,” Dromm said. “We’ve seen an administration in Washington D.C. that is already attempting to take away our rights and God forbid something like that should happen here in New York City, and all the work that either [Sutton has] done or the Council has done could be lost if in fact we don’t codify it.”

When it came to the bill proposed by Deutsch, Sutton and others mentioned that it would have DVS provide a service already provided by non-profits, some of which had representatives at the hearing. The service of providing legal advice and guidance in regards to discharge status upgrades is somewhat specialized and requires intricate knowledge of the legal system, according to Director of the Veteran Advocacy Project Coco Culhane, whose non-profit provides said legal advice.

“We do not believe that a unit within DVS would be an efficient use of city funds or city employees’ time,” Culhane said, going on to note that DVS was not originally intended to be a service-based agency, and so should not be advising veterans even if it had the legal expertise. The original mission of the still-new agency is to educate veterans about the services they are applicable for, largely federal, and help connect them with the resources they need.

Sutton agreed with this sentiment.

“DVS is not a subject-matter expert on evaluating the legitimacy of discharge upgrade claims,” Sutton said. “This bill would require that DVS provide what is actually legal advice and counselling, which is beyond its capacity and is inappropriate because city agencies do not provide direct legal counsel to members of the state.”

Systems DVS already has in place to assist veterans seeking discharge upgrades mainly rely on reaching out to attorneys for their advice, and helping link veterans to appropriate legal services. VetConnect, an online website that seeks to connect veterans with services they need, is also part of these efforts.

Ashton Stewart, coordinator with SAGE Vets Program, an LGBT veterans advocacy group created for the purpose of helping veterans who had been less-than-honorably discharged due to their sexual orientation, supported the legislation.

“SAGE wholeheartedly supports the discharge characterization upgrade assistance legislation.” Stewart said. “We believe that taking this step will bring profile to the important issue of LGBT service members wrongfully discharged from the military because of their sexual orientation.”

Vadim Panasyuk, Senior Veteran Transition Manager at the Iraq and Afghanistan Veterans of America, added to the concerns about the bills, saying that if DVS were to provide legal advice concerning discharge upgrades it may complicate things for veterans and nonprofits.

“There are already processes in the nonprofit sector that will help veterans upgrade their discharge status free of charge,” Panasyuk said. “IAVA is concerned that passage of these bills could create confusion among the nonprofit and veterans community. DVS may be better served to complement these existing services rather than competing or duplicating them.”

The larger problem, according to both Culhane and Kent Eiler, Project Director of the City Bar Justice Center’s Veterans Assistance Project, is the lack of qualified lawyers in the field of veteran law.

“The demand for able, experienced accredited representatives is vastly outstripped by the demand of veterans who need assistance,” Eiler said.

According to Sutton, so far in 2018, 105 veterans contacted DVS about discharge status. However, both Eiler and Culhane expressed that this number is not representative of the actual need. Eiler mentioned that those who come to the City Bar Justice Center are often put on an eight- to ten-month waiting list, while Culhane said that the Veteran Advocacy Project has had as many as 650 veterans waiting at a time just for the non-profit to investigate the merit of their case. Culhane said in just under two years, 500 veterans had contacted her association seeking assistance with a discharge upgrade.

With only two members of the Council remaining by the time the last panel of activists testified, Brannan brought the meeting to a close, with the fate of the bills unclear -- they can be voted on by the committee at a future meeting, amended and reheard by the committee, or laid over indefinitely.

Meyer, who was the last to give testimony, representing the American Veterans for Equal RIghts’ New York Chapter, expressed that having heard the testimony given at the meeting, his thoughts on the bills had changed. However, his feeling that LGBTQ veterans needed to be repaid for their service even in light of unjust treatment, remained.