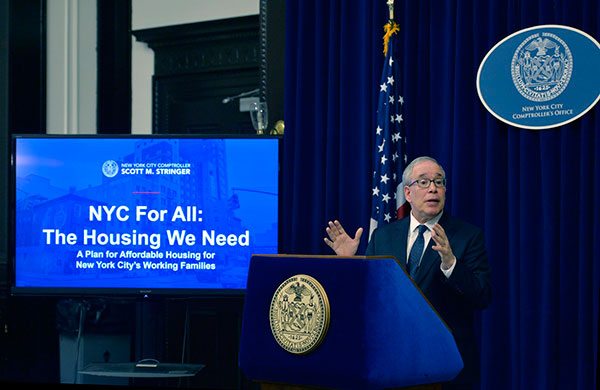 City Comptroller Scott Stringer unveiled an ambitious plan on Thursday to address New York’s affordable housing crisis, criticizing Mayor Bill de Blasio for not doing enough and calling for investment of hundreds of millions of dollars in additional funds, increasing the share of affordable housing units for homeless and very low income people, and funding it by shifting tax burdens towards the wealthiest New York homeowners.

The plan, entitled “NYC For All: The Housing We Need,” is intended, Stringer said, to address issues with the affordable housing program embraced by not only the de Blasio administration, but administrations going back to the days of Mayor Ed Koch. Stringer characterized the proposal as a “war on poverty.”

“I believe it's time to change our approach,” Stringer said at a press conference announcing the plan. “We need to break the mold.”

Stringer noted that despite New York’s record number of jobs, low unemployment, and high population, the city’s aging housing stock has not kept up with demand, and rents have consequently risen in price dramatically, particularly in the past ten years. Most left behind, Stringer explained, are extremely and very low-income New Yorkers who face severe housing pressure, numbering 515,000 people, according to an analysis by his office, who are severely rent-burdened, meaning they pay more than 50 percent of their income in rent.

“Behind the numbers are real people,” Stringer said. “They’re actually working New Yorkers. The home health aides for our aging parents, the cashier at the local supermarket, the person who empties the trash and vacuums the office floors late at night. People we see and rely on every day.”

According to the report released on Thursday, the majority of units under de Blasio’s 300,000-unit affordable housing plan are being allocated for households with incomes of up to $75,120, which is categorized as “low-income” by the Stringer report, while far fewer units are allocated to very low and extremely low-income households. Extremely low-income households, which are characterized as those making less than $28,170 per year, are allocated about the same number of units under the plan as “middle-income” households, where household income reaches up to $154,935.

The report notes that this allocation does not accurately represent those who are actually in need of affordable housing, the main thrust of Stringer’s argument that the city’s plan is not appropriately calibrated to need, a point he and a variety of other elected officials and advocates have stressed for years but de Blasio has regularly challenged, saying he believes the plan must include segments for a broad spectrum of New Yorkers looking for affordable places to live.

The 515,000 extremely and very low-income households who are severely rent-burdened represent the vast majority of the 580,000 households citywide that are severely rent burdened or living long term in a shelter. However, only 75,000 units, or 25 percent of the proposed units under the de Blasio plan, are intended for those households.

“The current plan is simply out of line with where we need to build,” Stringer said.

To ameliorate the problem, Stringer’s plan calls for $500 million in additional annual funding for extremely and very low-income housing, including $375 million in capital costs and $125 million in operating subsidies. This would support the construction and maintenance of affordable units for the poorest New Yorkers, for whom construction is more expensive if landlords are going to charge lower rents.

The number of units would remain the same as under de Blasio’s Housing New York 2.0 Plan, which calls for building 120,000 new affordable units as part of the larger plan for 300,000 affordable units, most of which are those being “preserved” under affordable rent regulations. Stringer’s report noted that 34,000 apartments were already completed or are underway, and 85,000 remain to be built. Under the Stringer plan, 98 percent of those 85,000 units would be constructed as deeply affordable.

The plan also calls for tripling the number of units set aside in the Housing New York plan for homeless New Yorkers, from 5 percent to 15 percent, echoing a push by homeless advocates and a recent City Council bill introduced by Council Member Rafael Salamanca of the Bronx; and applying that percentage to both new construction and preserved units. Stringer cited statistics from the city’s Department of Housing Preservation and Development (HPD), stating that the city has not even met its 5 percent stated goal, with only 1 percent of units allocated to homeless families.

“Mayor Koch, as our research showed, set aside just 10 percent of units in his housing plan for the homeless,” Stringer said. “And the shelter population went down by more than a third in just three years. We can do that again.”

De Blasio has repeatedly opposed such calls, including when recently challenged by a homeless woman, who is an activist with Vocal New York, at his gym and on the radio.

Stringer’s plan also calls for at least 20,000 additional units to be developed on 600 plots of vacant, city-owned land by community land trusts or land banks controlled by non-profit entities.

To pay for these reforms, Stringer is proposing a sweeping change to the city’s property tax system that he says would increase annual city tax revenues by $400 million, through a more progressive tax system that raises rates on wealthy homeowners and eliminates a “double tax” on the middle class.

His plan would involve scrapping the “mortgage recording tax,” which Stringer characterized as being an extra tax on middle class homeowners.

“This system is patently unfair,” Stringer said. “It’s a penalty on the middle class who can’t pay all cash to buy a home.”

The current property tax scheme provides for both a tax on the cost of the transaction, and a tax on the value of the mortgage, with three brackets: under $500,000, between $500,000 and $1 million, and over $1 million. This system favors those who purchase apartments in cash, who tend to be wealthier and buy more expensive units, and do not have to pay the mortgage tax. Under the system, middle class homeowners often pay more than wealthy condo owners.

Stringer noted that in 2016, 80 percent of condo sales and 90 percent of townhouse sales in Manhattan were all-cash deals. Those cash deals escaped being subject to the MRT. The greater percentage of a transaction that is financed with borrowed money, the higher the tax incidence, putting a greater burden on buyers without the resources to do a cash deal.

While ditching the MRT, Stringer proposes creating a more graduated, progressive taxation system based only on the value of the transaction, taking into account high prices of some real estate by upping the top echelon from $1 million to $10 million. For properties over $10 million, the tax rate would be increased to 8 percent. Below $500,000, the rate would be 1 percent. Stringer hopes that, beyond funding affordable housing, the reformed tax structure could help encourage more middle- and working-class homeownership in the city.

The tax reforms would have to be approved by Albany. Stringer, who is widely expected to run for mayor in 2021, said that the new Democratic majority of the state Senate set to take power in January means that the tax reform is, for the first time in a long time, a possibility.

“We are beginning the conversation with legislators,” he said in response to a question. “And they are going well. Again, I want to stress that the state of play has fundamentally changed, we all know it’s changed. I believe that, obviously there are priorities like renewing and strengthening the rent laws, and they have a lot on their plate, but this can get done now because we have like-minded people who understand the housing crisis.”

Getting the mayor on board with the plan may be a different story. Stringer said that de Blasio has recognized some issues with the housing plan, but noted that City Hall has not given a firm answer on certain things.

“He has recognized that the plan originally put forth was not meeting the needs of the people who need the housing the most,” Stringer said, referring to the fact that de Blasio has made some tweaks to the plan, even while resisting some of the other calls for more sweeping changes.