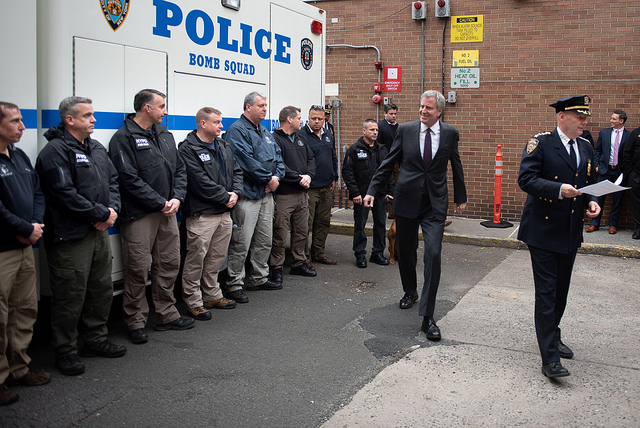 When video was captured in 2014 of Staten Island resident Eric Garner dying with an NYPD officer’s arm wrapped around his neck, just months after the election of a progressive mayor promising a new day at the police department, it seemed like a watershed moment. The evidence was there for millions to see for themselves, across the city and country, and beyond. It seemed impossible that the officer, Daniel Pantaleo, would escape any accountability. But more than four years later there has been little beyond Pantaleo’s move to desk duty. Years of agitation and advocacy, lawsuits and desperate pleas occurred as a Staten Island grand jury declined to indict Pantaleo on criminal charges and a federal civil rights investigation has crawled to no end. Only recently -- amid ongoing criticism that there is still no real accountability for police officers who break the public trust, department protocol, or the law -- the NYPD announced a departmental trial.

Over the course of the past five years, there is little evidence that Mayor Bill de Blasio and the police department that he controls have taken steps to improve officer accountability, and the administration has even taken a large step backwards in terms of transparency (and the accountability that can come with it) regarding officers’ disciplinary records. Now, de Blasio is facing another round of questions about his management of the department, while he touts reform measures like de-escalation training and neighborhood policing that do not appear to directly connect to outcomes for officer accountability.

The recent arrest of Jazmine Headley, also caught on video that went viral, led to no action against two police officers who were seen violently pulling the young mother’s one-year-old baby from her arms and threatening bystanders with a taser. The NYPD, after a “strenuous” week-long review of the incident, declared its officers innocent and pegged the blame on two security guards, called “peace officers,” at the Human Resources Administration office where the incident took place. Separately, Department of Social Services Commissioner Steven Banks, under whom HRA falls, suspended the two peace officers and announced that they would face disciplinary charges that could lead to termination. Tellingly, Banks also announced new HRA protocols that include directing peace officers to not request NYPD assistance -- unless there is an immediate safety threat -- “without first contacting the Center Director or Deputy Director or her/his designee to attempt to defuse the situation by addressing a client need.”

De Blasio, who came to power in 2014 vowing to reform the NYPD but has since failed to fully follow through in the eyes of many of his supporters, initially issued a tepid response to the incident and later defended the NYPD during a press conference and then an interview on WNYC’s The Brian Lehrer Show. He pointed to the peace officers and a situation that was “already out of control” when the NYPD arrived, and said it was “unfair” that critics lambasted the NYPD while ignoring the many reforms that have been enacted under his tenure.

“It’s very easy to critique when you’re not in charge,” said de Blasio, whose allies acknowledge several aspects of police reform he has instituted but say he’s fallen far short on accountability for badly behaving officers. “When you’re in charge you better get your facts straight.”

Elected officials and advocates were dismayed by the NYPD’s refusal to discipline the two police officers. “This defies belief. I am angry, confused and heartbroken,” City Council Speaker Corey Johnson tweeted on Friday. “Anyone who watched that video I’m sure comes to the same conclusion. We still need Justice for Jazmin[e].”

“This incident was badly mishandled, and agencies’ independent reviews have determined which employees are the most responsible for escalating the situation,” said Olivia Lapeyrolerie, a de Blasio spokesperson, in a statement. “Now we will work to ensure that both agencies work together to improve their policies and protocols so we can prevent this incident from happening ever again. This will absolutely lead to immediate reforms on the part of both agencies.”

Joo-Hyun Kang, a spokesperson for the Communities United for Police Reform coalition, said the department “is continuing to protect its own officers at any cost.”

“On Mayor de Blasio’s watch, the NYPD has been completely unwilling to hold its own officers accountable for wrongdoing and misconduct,” Kang said in a statement, calling for the two police officers to be fired from the force. “It’s outrageous and wrong that no officers were even interviewed for the NYPD’s sham investigation into Jazmine Headey’s arrest, and that the names of officers have still not been released. An independent investigation into Jazmine Headley’s case and how the NYPD officers acted is clearly needed.”

The Civilian Complaint Review Board, an independent police oversight agency, is also investigating the incident and it’s possible it may come to a different conclusion than the police department. However, even if the CCRB makes a disciplinary recommendation, NYPD Commissioner James O’Neill would still have the final word and could dismiss even those findings. BuzzFeed News reported in March that hundreds of police officers had been allowed to remain on the force despite committing offenses for which they should have been terminated. The report prompted the NYPD to create an independent panel in June to review its disciplinary practices. The three-member panel was initially given four months for the review but requested an additional 90 days to complete its work, at the end of which it will issue a public report with its conclusions.

“In a day and age that we’re talking about building trust between police and communities, that incident undoes all the progress we’re trying to make,” said City Council Member Donovan Richards, who chairs the Council’s public safety committee, in a phone interview on Monday. “It further exacerbates the mistrust.”

Though he credited the mayor and commissioner for taking what steps they have to improve the public’s perception and relationship with police -- including the neighborhood policing program and the body camera program -- he flatly said accountability has not improved. As a response, he is preparing to introduce legislation that would mandate the creation of a “discipline matrix” that categorizes police conduct violations and details the specific punitive measures each violation would invite. Other jurisdictions have codified such guidelines to ensure that misconduct is punished in consistent and standardized ways, with little leeway for weakening disciplinary recommendations. Similar policies have been enacted and debated in other municipalities as well, including in Newark, New Jersey, which created a new civilian oversight board in 2016 that would use a matrix to determine responses to officer wrongdoing.

“What happened to bias training?” Richards wondered, citing the new training techniques that the department has been touting alongside de-escalation training as a solution since after Garner’s death in 2014. “Why do we need training to treat communities of color with respect? If this was a different zip code, this incident would absolutely have not happened.”

“If you have to get training to not pull a baby so harshly, you probably do not belong in the department. I don’t know how you train someone to not do that,” he added. Richards had called for the officers to be fired soon after the incident.

One significant hurdle to accountability has been the de Blasio administration’s reinterpretation of the state Civil Rights Code’s section 50-a, which protects police officers’ personnel records from public disclosure. Previous administrations have released a limited amount of information about officers’ disciplinary history. De Blasio’s administration did so as well up to 2016, when it claimed that the law had been misinterpreted for decades and changed its policy. The mayor said his hands were tied and that it was up to the state Legislature to scrap the provision.

Richards noted, however, that there has been “radio silence” from the administration on repealing 50-a. “There’s always time to get a better grade,” he said of the city’s record on police accountability, “The big test coming up is 50-a.” He is encouraged that a Democrat-controlled state Legislature will take up the issue if there is a vocal push for it.

Results of the NYPD commission and repealing 50-a could bolster the notion of a new era of accountability that critics are demanding. In the wake of the Headley incident, not only did those critics connect what they saw as police misconduct to the Garner incident, but also to other instances in the years since, including multiple shootings by police of unarmed individuals suffering from mental illness. An ongoing federal corruption trial involving several former top NYPD officials and two prominent donors to the mayor has also undermined the department’s reputation and the mayor’s commitment to reform.

Short of any steps forward, Richards is concerned that the department is sending a message to other “bad apples” that they will be defended no matter what their behavior, further eroding any confidence that New Yorkers, especially communities of color, may have in law enforcement. De Blasio has staked some of his policing legacy on a neighborhood policing program he says is part of already drastically-improved relations between police and communities -- a claim many activists and elected officials say is overly generous. The administration also points to a reduction in both use-of-force incidents and complaints against officers as proof that its policies are working, while crime continues to drop and arrests are significantly down.

Recalling the video of Headley’s arrest, Richards worried about her baby and the trauma he went through.

“That baby will see that video some day,” he said. “Do you think he will trust the police?”