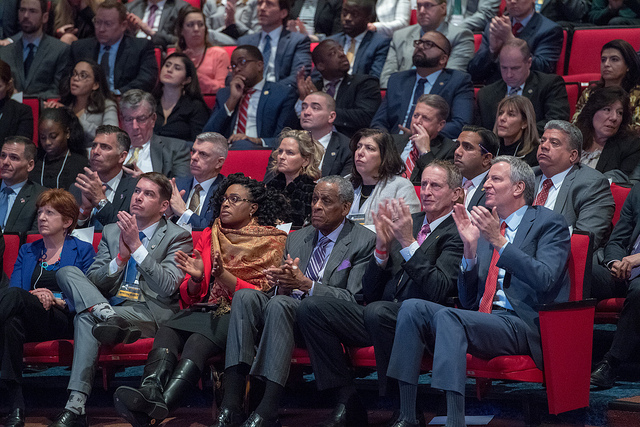 Governor Andrew Cuomo’s State of the State speech and accompanying $175.2 billion state budget proposal for fiscal year 2020 had something for everything. The 354-page policy book lays out proposals, big and small, on everything from criminal justice reform, transit and infrastructure funding, workforce protections to rent regulations, voting and ethics reform, farmer benefits, legalizing marijuana, women’s rights and reproductive health, LGBTQ protections, and environmental regulation, to name just a few.

The budget proposal, with its long list of policy priorities, has several measures that will have significant consequences for New York City and its own budget, the first draft of which Mayor Bill de Blasio will soon present. The state fiscal year begins April 1, the city’s begins July 1. Citizens Budget Commission, a nonpartisan fiscal watchdog, noted in its assessment that the governor’s budget proposal cuts nearly $100 million in reimbursements and aid to the city.

And while some of the governor’s initiatives may benefit the city or line up with de Blasio’s priorities, there are others that could end up being a burden and might prompt staunch opposition from the mayor and state legislators who represent districts in the five boroughs. De Blasio expressed concern about a few proposals in the hours after the governor’s presentation, while conceding that “there's a lot to like in the speech.” Below are eight key takeaways for the city from Cuomo’s policy and budget plans.

Cuomo wants the city to split MTA costs with the state. De Blasio disagrees.
Cuomo has embraced congestion pricing as a key proposal to garner resources for the MTA and stem the tide of years of disinvestment that have left large funding obligations and a crumbling subway system. While he has still not fully fleshed out a congestion pricing plan, Cuomo estimated such a system could bring in about $15 billion in revenue over a ten-year period, but also insisted that any shortfall to fund the subways and buses over and above that should be split 50-50 between the city and the state. He argued that over several MTA capital plans the city’s contributions to the MTA have been falling and the state’s contributions have been rising, a characterization that de Blasio later took issue with.

Cuomo, who effectively controls the MTA and appoints a plurality of its board members and its leadership, is proposing an overhaul of the agency’s management, which he has blamed for repeated failures over the years and again in his speech. “It was purposefully designed so that everyone can point fingers at everybody else, and nobody's responsible,” he said, even though he has claimed credit for its successes in the past and he has recently re-exerted control relative to the L-train shutdown.

De Blasio has repeatedly said the best solution to the MTA’s financial woes is a millionaire’s tax, an idea that is anathema to Cuomo. In his Albany news conference shortly after the governor’s speech, the mayor reiterated the proposal as he pushed back against the governor’s suggestions. “Now, there’s a lot of good ideas on the table and here's a chance to decide which combination of those ideas will actually solve the problem,” he said of funding the MTA. “But yet you can't take it out of the city budget, it’s not going to work.” Though he continues to say he prefers the millionaire’s tax, de Blasio’s rhetoric around congestion pricing has warmed considerably.

Reforms needed to close Rikers Island may soon be reality
The governor’s budget proposal includes support for several criminal justice reforms which de Blasio has said are crucial to the plan to close the Rikers Island jail complex within 10 years. Among those are ending cash bail, among other reforms to pretrial detention processes, and passing Kalief’s Law, a speedy trial reform named for Kalief Browder, the Bronx youth who spent three years on Rikers Island on charges of stealing a backpack. Never convicted, Browder was released but later died by suicide, which was attributed to his harsh treatment while in detention.

De Blasio has said that bail and speedy trial reform would work in concert with ongoing efforts to reduce the population of Rikers down below 5,000, the threshold the city estimates it would need to reach in order to house detainees in borough-based facilities that are being planned. The city jail population is now under 8,000, de Blasio announced during his State of the City address.

Rent regulations will help de Blasio’s affordable housing plan
De Blasio’s ambitious plan to create and preserve 300,000 units of affordable housing by 2026 is on track according to city estimates and broke a record in 2018 by financing 34,160 affordable units, the most in one year for any administration. That plan could benefit massively from a push by the governor and the Legislature to strengthen rent regulations, which are set to expire at the end of June.

Cuomo has expressed support for ending vacancy decontrol whereby upon certain vacancies landlords can remove units from the regulated rolls, eliminating preferential rent limits, and reforming the process by which landlords can assess tenants for improvements to buildings and apartments. All are items that de Blasio praised while noting that he would have to see more details. Such regulations would have been “inconceivable” when Republicans controlled the state Senate, he said as he anticipated seeing stronger laws in place this year. “It's going to help us preserve affordable housing in New York City,” de Blasio said. “And certainly from what the governor said in the speech, I'm encouraged.

Education and mayoral control
Cuomo proposed a 3.6 percent increase in education funding statewide -- an increase of $1 billion from the current year for a total of $27.7 billion -- and proposed a new school funding formula called “Education Equity,” emphasizing that current funding is not flowing to the poorest schools in poorer school districts.

The governor presented new data based on his administration’s analysis of numbers provided to the state by large schools districts that had been required by a law passed last year meant to assess exactly how districts are allocating education funds. Cuomo showed data that indicated all the largest school districts are funding their wealthier schools at higher rates than their poorer schools, though de Blasio questioned the presentation and said the city would have more to say soon. It’s not immediately clear how Cuomo’s administration calculated its numbers.

Cuomo’s proposal looks like it would set up a fight with the mayor, who insisted that the governor should fully fund the “Foundation Aid” formula as required by the Campaign for Fiscal Equity court decision, which Cuomo has argued is settled and a relic of the past.

De Blasio did praise the governor for proposing a three-year extension of mayoral control of city schools, which Cuomo has done in the past though he has appeared comfortable settling on multiple one-year extensions (last time it was two years) as a means of frustrating the mayor. “[U]nder a mayoral control model that we have in New York City for the last five years, we have consistently moved resources to schools in greater need,” de Blasio said, noting that Cuomo’s presentation “did not reflect the reality we know in New York City” and promising to correct the record.

Notably, Cuomo has not initially indicated a plan to raise the cap on charter schools in New York City, a statutory limit that will soon be hit. Cuomo has been a staunch supporter of charters (and de Blasio has mostly been an opponent), but he has been relatively quiet on the issue as he has moved left over the last few years and repaired his relationship with the teachers unions. Still, Cuomo has made sure that charters have secured key protections in state agreements, though this year could hold a different approach.

Speed cameras and bus lane cameras
Last year, a limited speed camera program around schools in New York City lapsed amid legislative intransigence led by state Senate Republicans but was revived through an agreement among the governor, mayor, and New York City Council. Cuomo has proposed reinstating the program in state law through 2022, expanding the number of camera zones from 140 to 290, as well as removing a cap on bus lane cameras and allowing automated cameras to enforce “block-the-box” violations in the proposed congestion pricing zone. The bill would also create a new camera program to combat violations in Manhattan that contribute to congestion.

Infrastructure program highlights include JFK, LaGuardia Airports
Cuomo touted an additional planned $150 billion investment in infrastructure in his third term, building on projects that are already underway and several new ones that he is expected to launch. Among those are the renovations of LaGuardia Airport, the new JFK Airport, four new Metro North stations in the Bronx, an expansion of the Javits Convention Center, and the opening of the Shirley Chisholm State Park in Brooklyn.

Anti-terror initiatives
New York City continues to be one of the most prominent terror targets in the world and Cuomo offered several measures to improve security and preparedness, including legislation to ban gun bump stocks, prohibit weaponized drones, and regulations on the sale of certain explosives.

Two measures were directly impelled by incidents in New York City -- the governor proposed a bill to require two pieces of identification to rent a vehicle, citing attacks carried out across the world and particularly the 2017 Halloween attack on the West Side Highway that claimed the lives of eight people. Cuomo also proposed investments in “infrastructure hardening” such as traffic bollards and crash barriers to protect civilians.

Lead exposure thresholds
Cuomo proposed lowering the threshold of blood lead levels that would lead to an immediate public health response, which could potentially become a prominent issue in New York City where residents of the New York City Housing Authority have been fighting with the administration for years over lead paint in their apartments.

Other policies apply to New York City
A variety of other policies the governor is backing would apply to New York City and have an impact in the five boroughs, including some measures that have already passed the Legislature, like voting reforms, a ban on gay conversion therapy, and the Gender Expression Non-Discrimination Act. This list also includes the planned expansion of abortion rights, more gun control, the Child Victims Act to address child sex abuse, and the Dream Act to provide state tuition assistance to undocumented immigrants and their children, among other policies. Also in this category is the expected legalization of recreational marijuana for adults 21 years of age and older.