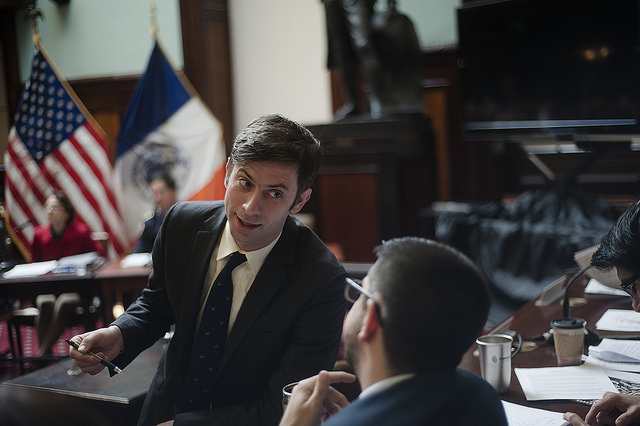 Mayor Bill de Blasio owes hundreds of thousands of dollars to lawyers who helped him during legal investigations that ultimately resulted in no criminal charges against the mayor, but left him with bills to pay even after he reversed course and decided to use public funds to cover the portion of his legal expenses related to his government work. The remaining balance, for work related to campaign activity de Blasio was involved with that was the subject of part of the inquiries, has left de Blasio looking for a new way to pay off his debts: a legal defense fund whereby he raises money from donors willing to help him.

But, there’s been a key catch: the city does not have a legal framework for allowing public officials to create such accounts, and the advice the mayor got from the city’s Conflict of Interest Board limited him to receiving very small gifts from prospective benefactors.

Spotlighting this perceived gap in the city’s legal and campaign finance framework, de Blasio’s situation, as well as others before him, has spurred action, and the City Council has begun to consider a new law to create “legal defense trusts.”

On Monday, January 14, the Council’s Committee on Government Operations held a hearing on a bill proposed by Council Member Stephen Levin, a Brooklyn Democrat, that would allow city officials to establish such trusts for fees incurred during an investigation or trial. The bill sets a donation limit at $5,000 per donor, which is more than double the $2,000 limit for campaign contributions, with no limit on how much an official can raise in such a fund. As written, the bill bans lobbyists, persons doing business with the city, corporations, and LLCs from contributing to legal defense trusts. Additionally, any legal defense trusts would be required to make quarterly reports to the Conflict of Interest Board on their donations, which would then be made public and posted online, in a manner similar to the Campaign Finance Board’s reporting of political donations. No campaign funds could be used for a legal defense trust or vice versa and each trust will be overseen by an independent trustee.

Levin said that his bill “would bring transparency and regulation to a system that is in need of improvement.” Under the current law, city officials in civil and some criminal cases are entitled to a legal defense paid for by the city, as long as the cases relate to their public duties. However, offenses unrelated to an official’s public duties (such as political campaigns, issue advocacy, and certain administrative issues) are not paid for by the city.

Council Member Fernando Cabrera, a Bronx Democrat and the chair of the Government Operations Committee, explained it as a problem because “public officials are not highly paid and rarely independently wealthy,” and “defending against allegations and investigations for alleged wrongdoing can be financially devastating for someone of average means.”

While there have been past instances to raise the issue, the bill and committee hearing were spurred by a March 2017 advisory opinion from the city’s Conflict of Interest Board, which stated that because there was no law specifically addressing the issue, donations to a public official’s legal defense fund are considered gifts under current law and therefore limited to $50 per person. The advisory opinion came after Mayor de Blasio planned to create a legal defense fund to cover fees from state and federal investigations into his fundraising activities.

De Blasio, a second-term Democrat, was never mentioned by name during the hearing, but was frequently referred to as a “public official in the headlines,” when the advisory opinion was brought up during testimony provided by representatives of the Conflict of Interest Board.

At a press conference on January 8, de Blasio reiterated his assertion that a new legal framework was necessary. “I believe there is a need in a democratic society for this kind of mechanism, a legal defense fund is a very well established idea,” he said. He added the caveat that the bill had not gone through the legislative process, so he didn’t know the final wording. When asked if he would disclose his donors if the bill passed, he replied “absolutely” (it may be required).

While de Blasio has been earning the salaries afforded to elected officials for many years, he also owns two houses in Park Slope, Brooklyn, making him fairly wealthy. He has indicated he does not have the means to pay his legal bills, not acknowledging the possibility of leveraging his property, or at least its value. He has pointed to the larger case for legal defense funds that goes beyond his situation, something it appears City Council members and others are in agreement about. De Blasio has claimed that law enforcement investigations are part of being in political office.

At the hearing, the bill appeared to have the support of the Council members who spoke, although some had suggestions for improving it. The Conflict of Interest Board, represented at the hearing by its executive director, Carolyn Lisa Miller, and general counsel, Ethan Carrier, also expressed general support. However, Miller said there are some reservations about a section of the proposed bill that would ban the use of a defense fund from paying legal fines, but allows a fund to pay civil and administrative fines, such as Campaign Finance Board fines. Council Member Keith Powers, a Manhattan Democrat who expressed support for the concept of the bill but is undecided about its current form, asked about this section, but it was unclear if the provision would be changed.

Miller stated the COIB already does not have enough resources to do its mandated work and would require additional funds to fulfill the requirements of the bill. She estimated that an online reporting portal would cost $40,000 to set up and a few thousand each year afterwards for licensing. The bill requires quarterly reporting for defense funds and each audit would cost between $5,000 and $10,000, according to Miller’s estimate based on information from other city agencies. When asked about the number of defense funds that would be registered, she said she did not know. If the section allowing defense funds to pay campaign finance violation fines were to be included in a final bill, she estimated that as many as 50 defense funds could be established. Without that provision, she said there were only be a few, if any, per year. Many candidates for office wind up incurring some amount of fines from the Campaign Finance Board, often ranging from a few hundred dollars to a few thousand.

Council Member Kalman Yeger, a Brooklyn Democrat, said he supports the concept behind the bill, but thinks that the specifics could be improved. He questioned why the Campaign Finance Board would not allow COIB to use its reporting portal or certified auditors, which he said would save taxpayers money. According to Miller, the CFB’s portal is proprietary to that agency and cannot be used by COIB. Near the end of the hearing, Cabrera proposed that the CFB could administer the bill’s requirements instead of the COIB. Both Levin and Treyger were against this proposal, but Yeger reaffirmed that he would like a mandate included in the bill for the CFB and COIB to share resources.

While not at the hearing, watchdog group Common Cause supports the bill. In a July 2017 statement in support of legal defense trusts, Susan Lerner, the executive director of Common Cause/NY,  said that “there must and should be a process for public officials to raise funds to pay for legal bills” and “we need a policy in place to give public officials a workable solution and avoid ad hoc improvisation.” Common Cause commissioned a study of legal defense fund laws across the country and made recommendations to cover New York City’s perceived “policy gap.” Levin’s bill includes many of Common Cause’s recommendations.

The Council committee hearing on the bill only included a statement from Council Member Levin, its lead sponsor, and the representatives from COIB. The Council now has to decide whether to amend Levin’s bill and if more hearings are required to address the issues raised at the January 14 hearing. The Council will also have to decide to vote on the bill or put it on indefinite hold. If it passes committee, it will go to the full 51-member Council. Meanwhile, it is unclear when exactly Mayor de Blasio’s legal bills are due, the debt has been outstanding for quite some time now.

In response to a tweet about the bill from Politico reporter Sally Goldenberg, former City Council Member Sal Albanese, a 2013 and 2017 Democratic primary opponent of de Blasio, said that Levin and the bill’s other sponsors “should be held accountable for introducing this self serving corruption hazard” and called them “Bill de Blasio sycophants.” Levin replied to Albanese, stating that “I never spoke to [the Mayor’s Office] before introing this bill” and that “the bill itself is specifically designed to eliminate a corruption hazard.”

Note: after initially mistaking Council Member Yeger for Treyger, this article has been corrected. It has also been updated to clarify Council Member Powers' stance on the bill.