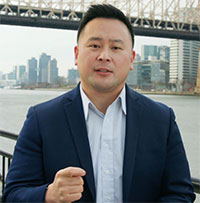 Assemblymember Ron Kim, a Queens Democrat, is running for Public Advocate in the special election set for February 26. He joined the show to discuss his resume and his candidacy, which is staked on a "people over corporations" platform that is critical of the deal to bring Amazon to Queens and centered on a plan to try to eliminate the student debt that New Yorkers hold. Kim promises a drastic shift in focus for the office, away from even its City Charter-mandated responsibilities, he said.